How I forgave the racist man who murdered my wife

Rev Anthony Thompson hadn’t planned on saying anything to the 21-year-old man who shot his wife but, during Dylann Roof’s bail hearing, he felt God whisper a message to him. And so the word stumbled out: “I forgive you. My family forgives you.”

Five years on from the Charleston church massacre, Rev Anthony continues to live and breathe this message of forgiveness. But that doesn’t mean he has forgotten the horrors of the night his wife was murdered.

A Bible study ends in slaughter

On the evening of 17 June 2015, Myra Thompson was leading a Bible study at Emanuel African Methodist Episcopal church in Charleston, South Carolina, for the first time. Roof had joined late. He wasn’t known to any of the twelve attending the study, but had been welcomed by all. He sat quietly as Myra shared. An hour later, as they finished in prayer, and while everyone else’s eyes were closed, Roof took out his concealed gun and opened fire.

Many died instantly, as a flurry of 77 bullets were released. Roof stood over his victims, shooting again and again as they lay on the floor. He paused five times, to reload, shouting hateful racial slurs as he shot them. Some played dead, and miraculously escaped his gunfire. Eight of the church members died at the scene, and one died later – they became known as the Emanuel Nine.

Having received a phone call to tell him that there had been a shooting, Rev Anthony was one of the first people on the scene. Upon arriving, he couldn’t find Myra, but one of the survivors, Felicia Sanders, said:“ Anthony, Myra’s gone.” He ran outside and started praying: “Lord, please, let her be alright. If she’s not OK, don’t let her suffer.”

Officials were all over the church and were keeping guard outside. It took five of them to hold the pastor down. He asked one of the FBI agents what was going on: “He kept telling me: ‘I can’t tell you anything. I don’t know anything.’ So my last question was: ‘Is anybody in the church?’ And he said: ‘Yes.’ I said: ‘Well, if they’re in there, why can’t they come out?’ He said: ‘Well, I can’t tell you that either.’ By that time, I assumed that she was dead. And that’s when I just lost all control.”

When Roof was brought before a bail hearing, Rev Anthony had been reluctant to attend, and was surprised when the judge read out each victim’s name and asked relatives if they wanted to say anything. Anthony was determined not to speak, but then found God telling him to “Get up”. And so he got up. “I said: ‘God, whatever it is you have to say you better say it because I don’t have anything to say. So come on, don’t embarrass me up here.’ He reminded me that I was his child, Dylann was his child and that I was a sinner just like Dylann. And I’m saying to myself: ‘You gotta be kidding. I’m not going to tell people I’m a sinner. If that’s what you want me to say I’m gonna sit down.’ But he just kept on coming. And so by the time I got to the podium, I’m thinking: ‘Yes, you know, I am a sinner just like Dylann, and I should be able to forgive him, just like God forgave me.’ And so I said: ‘Son, I forgive you. My family forgives you.’”

Roof kept his gaze down throughout the hearing, but when Rev Anthony uttered the name of Jesus, he looked right up into the reverend’s face: “I was able to really pierce into his eyes, almost into his very soul. And I saw a hurt young man.”

As he was walking back to his seat, Rev Anthony’s body started shaking: “From my neck, my shoulders, my arms, like something was going through my fingers. I could feel something leaving me but I couldn’t see it. And when it was all over, I had this peace like none other. I mean, he took away the burdens I was bearing, he took away the pain I was feeling. He took away the anger and hate – he just took it all away. It was gone. So I know that forgiveness heals. I know what forgiveness can do to a person’s life. It changes your life dramatically.”

There has been a huge variety of responses to Rev Anthony’s public statement of forgiveness: some said that he forgave too quickly, that he didn’t give himself enough time to process the grief; others that you cannot forgive somebody that has such evil intent, who has shown no remorse. Rev Anthony’s response? “Well, yes, I’ve heard all that and some more. You know, all those questions were just foolish to me. Forgiveness is a choice and, when we choose to forgive, we allow God to do the judging. We’re asking him to take over, because the Bible says do not take revenge. Biblical forgiveness is followed by prayer for the offender. It’s not about a feeling. In my case, it was divine intervention. It takes God to help you to forgive, even if you want to – you can’t do it on your own.”

At the close of his trial in January 2017, Roof was found guilty and sentenced to death by lethal injection. He is now on death row, awaiting a date for his execution.

Rev Anthony has written to him: “In that letter I made him aware of who my wife was, so that he can see that she was a real person, not just a black person...I wanted him to know that I still forgive him, no matter what.” He also told Roof that he would be happy to visit him and help him give his life to God, if he wanted to do that. The reverend is yet to receive a reply.

Charleston expected raw violence to explode on the streets in reaction to the racist crime. It had happened in other cities, following other major cases. And it was what Roof would have wanted. “His intent was to start a race war. So he was looking for an avenue to make that happen. Knowing that slavery in Charleston runs deep, he figured Emanuel was the place to go.”

Yet in Charleston God’s grace was poured out – some of the other victims’ loved ones also extended love and forgiveness to Roof and that seemed to extinguish the potential problems. “We had people from other cities, other states, coming here to actually start a riot. They were just waiting for us to give the OK. We told them to go back to where they came from. That’s why nothing happened. The fact that we forgave, the community was united. People from all walks of life and race and creed, united. That tragedy started something very new in Charleston.”

Much has happened in the city in the five years since, including the removal of the Confederate flag and an official apology for its role in slavery. Each year, on the anniversary of the shooting, Charleston commemorates the Emanuel Nine through events and programmes that highlight unity. 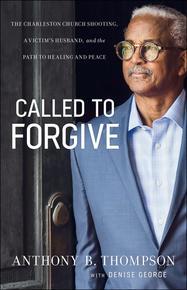 When asked what he hoped will be the ongoing legacy of those who lost their lives in the shooting, Rev Anthony replies: “That we come together as a people and define each other not by the colour of our skin, not by our status in life, not by our occupation, but just by who we are. Get to know each other, like neighbours; that’s what we’re trying to do in Charleston – we’re bringing down those walls that separate us as people, so that we can learn from each other.”