At its best, this three-part documentary on Hillsong Church exposes serious wrongdoing that should bring about repentance, reflection and change. But in dipping into sensationalism and dialling the cynicism up to 11, it becomes its own undoing, says Sam Hailes 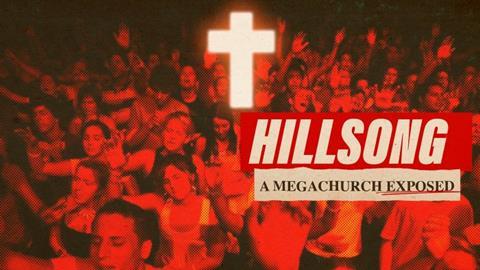 Hillsong Church is down…but not out.

In recent months this most mega of megachurches has been rocked by numerous scandals. It is surviving, but you could say it’s on life support.

When the BBC released Hillsong Church: God Goes Viral, last summer, they were able to squeeze the worst of the news into 94 minutes. Contrast that with this three-part offering from streaming giant Discovery Plus. With double the runtime, Hillsong: A Megachurch exposed contains so many accusations against the church, I lost count. And while the BBC (might have) tried (a tiny bit) to produce something (vaguely) balanced, Discovery Plus certainly has not.

Premier Christianity magazine takes no pleasure in reporting bad news about any church – Hillsong included. When it comes to my own views, you could even say I’m a friend (or should that be ‘fan’?) of Hillsong. I’m old enough to have bought the worship CDs (remember them?). I’ve been to their conferences in London and attended services in LA and New York. I’ve even publicly defended their worship leaders. Yes I’ve grilled them too, and, at times, given airtime to their critics, but I’ve tried to be fair.

The problem is, it’s becoming harder to defend Hillsong.

As the title suggestions, Hillsong: A Megachurch Exposed aims, from the start, to stick the knife in. Former volunteers speak of pastors arriving in limos and using church funds to dine out in fancy restaurants. Seats for celebrities were cornered off, in a flagrant disregard for basic scriptural teaching (see James 2:3). Far worse than this, the church is accused of burying abuse allegations and creating a culture of hypocrisy, where pastors would preach against sexual sin while secretly cheating on their wives.

As Christians, we cannot excuse the inexcusable

Ill-conceived defences of "the media hates Christians" just won’t cut it here. If Hillsong had practiced what it preached and created a healthy church culture, this documentary could never have been made. Let’s be clear: Carl Lentz’s infidelity was inexcusable, and if Brian Houston covered up his late father’s paedophilia (an accusation that he denies and has yet to be proven in court) that, too, is abhorrent. Christians are right to seek unity and even give one another the benefit of the doubt, but we cannot excuse the inexcusable.

Lentz’s adultery and Houston’s cover-up are the most serious allegations contained in the series, but there are many others. Students at Hillsong College are reportedly required to sign non-disclosure agreements. There are widespread claims of narcissistic behaviour. The former pastors of Hillsong Kiev claim they were bullied by other Hillsong leaders, and were told their fledgling congregation was expected to somehow fund business class flights and 5-star hotels for the Hillsong speakers due to travel to speak at their church.

One of the most impressive aspects of the series is the care and dignity afforded to those who have been mistreated – or even abused – by the church. By putting the voices of the victims like Anna Crenshaw at the centre, this team of secular filmmakers have shown a more Christ-like attitude than the church insiders who tried to keep everything under wraps.

In one of the most arresting moments, Billy Graham’s grandson, Boz Tchividjian, who has dedicated his career to empowering survivors of sexual abuse comments: “What I’ve consistently heard from abuse survivors from faith communities has been the following: ‘The abuse that was perpetrated against me was traumatic and will take a lifetime to heal from it. But what was worse than that was the response from the very community who I thought would be my greatest advocate, but who turned their back on me. I don’t know if I’ll ever heal from that.’ That’s really profound if you think about it. They’re saying the failed response from the church community has a graver impact on the victim than the actual abuse itself.”

But this documentary doesn’t just stick the knife in. It twists it.

There are multiple occasions where viewers are invited to believe the unbelievable. Hillsong’s welcome team doesn't exist for benevolent reasons, it's actually part of a sinister ploy to "put you at ease" and soften you up. When the church introduces new worship songs they’re really just “testing their new products on you”. Music is “critical to their hypnosis”, we are told. Rather than seeking to fulfil the Great Commission, the church is just trying to “spread their tentacles as far as they can”.

It gets worse. You thought Justin Bieber genuinely found faith? Of course not! The church deliberately “went after” him. It was a cynical recruitment and marketing ploy – similar to the “scientology strategy”. Perhaps the most ridiculous criticism of all comes towards the end, when it is suggested that Carl Lentz wasn’ fired because he’d been unfaithful to his wife but because he was becoming more popular than Brian Houston. It was apparently decided that he was stealing the limelight and had to go.

Much of this over-the-top critique comes from those outside the church, who are not Christians themselves. Bob Dylan's line comes to mind: "Don't criticise what you can't understand."

In dialling up the cynicism to 11, the documentary loses credibility

In dialling up the sensationalism and cynicism to 11, the documentary loses credibility. Any semblance of balance or perspective is jettisoned, which is a shame, because much of the analysis is accurate, and Christians need to hear it. Ultimately, it's overreach arguably leads to its downfall. As the production wraps up, its repeatedly inferred that Brian Houston could never leave Hillsong because he’s power-hungry and craves control. And yet, the day before the documentary aired, Houston did indeed resign.

We should all lament the serious harm inflicted by the recent scandals at Hillsong. And there is more than enough evidence in this series to prove serious mistakes have been made. Christians should watch it humbly and prayerfully.

Many will wonder if Hilllsong can recover. I think it's likely that the church will continue to attract thousands of young people, all around the world, to their worship services. An institution as large and powerful as Hillsong probably won’t collapse overnight, and I'm not willing to concede it deserves to fail; there's plenty of evidence to the contrary. But "will Hillsong recover?" is probably the wrong question. A better one might be: "will Hillsong repent?"

When failure is so widespread, a long, hard, prayerful look is needed at structures, reporting systems and accountability. In the case of Hillsong, this needs to be done urgently, before any further damage is done.

If your heart is already prone to negativity and suspicion, this documentary won’t do your spiritual life much good. But it does have its uses. I don’t think Paul had big budget documentaries in mind when he told the Ephesians to “expose the fruitless deeds of darkness” (5:11) but that passage is worth reflecting on. As are Jesus words: “Nothing is covered up that will not be revealed, or hidden that will not be known.” (Luke 12:2). In Ecclesiastes, it also says: “God will bring every deed into judgement, with every secret thing, whether good or evil” (12:14). At its best, this documentary exposes serious wrongdoing and, more importantly, gives Hillsong an opportunity to learn lessons and change…quickly. At its worst, the series clutches at straws, searching desperately for the smallest of misdemeanours it can use to berate a church that some just love to hate.

Hillsong: A Megachurch Exposed is streaming now on Discovery Plus