What the Church can learn from the constitutional monarchy

When symbolic and governmental power is contained in one person, it is ripe for abuse, says Chris Bright. Here’s what our scandal-hit megachurches could learn from the monarchy 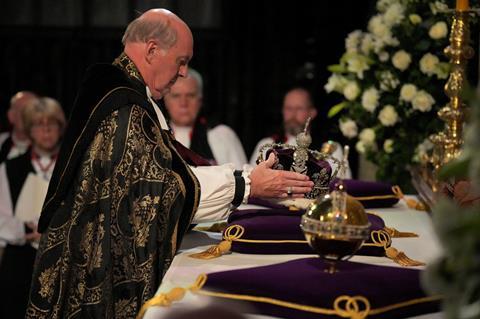 The Dean of Windsor, The Rt Revd David Conner, places the Imperial State Crown, and orb and sceptre on the high altar during the Committal Service for Queen Elizabeth, at St George’s Chapel in Windsor Castle

The sad news of Queen Elizabeth II’s passing has brought tributes from across the globe. Even us Brits, who are usually at pains to declare any love for their country, have started to realise that the monarchy holds more of a place in our hearts than perhaps we thought.

Many have been reminded of the benefits of a constitutional monarchy compared to other systems, such as republics. I’ve long been a fan of monarchy, because it places someone who isn’t a politician at the head of state; a singular person who is both un-electable and un-sackable, who therefore cannot play politics to win votes, but who has no governmental power. King Charles III can only hold to the values of the country, he can’t enforce law.

In practise, this means that power in the UK is both governmental and symbolic. But what does this actually mean? Governmental power is the ability to make laws and set policy. Symbolic power is much less clear. Ultimately, it is the power held by those to whom we look to as head of state.

Compare this system with that of a republic, such as the United States. There, the president holds both governmental and symbolic power. Not only are they setting policy and making laws, they also live in The White House, which is essentially a palace (compare that to 10 Downing Street!) The American president is often viewed as the de facto ‘King’ (or Queen) of America or - even worse – of the entire free world. This goes only a short way to start explaining the current political divide in America, but when a country sees its leader as both head politician and king, it cannot help.

The constitutional monarchy, however, has been one of the most (if not the most) successful models of state in the world. It has kept governments stable for centuries, and nations prosperous in the process.

So what does this have to do with the Church? Perhaps there are lessons we can learn from the constitutional monarchy.

Consider the recent spate of sackings and resignations of prominent megachurch pastors. These churches have often made the same mistake of giving the senior leader both governmental and symbolic power. The senior pastor (often the founder) is not only is the key decision-maker, but also the one who is ‘seen’ as the head of the church. This pressure to be both the ‘monarch’ of the church and the head of its governmental structures is an organisational Molotov cocktail. We’ve created leaders to be a singular point of failure, while at the same time putting them under unbelievable amounts of pressure. It’s no wonder they’re failing, when we’ve give them such symbolic power alongside the stress of governmental power too. This is not an excuse; it’s an explainer. When we place our leaders that high, they’ve got a long way to fall.

This is not how the Early Church operated. In the first Century, they had a much better system of governance. Apostles were responsible for planting and overseeing churches. They were the ones who were often ‘seen’ as the heads of the churches - you could say that they held the symbolic power. Indeed, Paul says in 1 Corinthians 1:12 that some were following Paul, and some Apollos. It was a dispute over apostles, not elders. But apostles were not around that often. Paul would arrive, stay somewhere from a couple of days to a couple of years, and then leave, perhaps only visiting again through his letters. Paul did get involved in individual governmental cases, and is very strong on certain points of church governance, but it was always from afar or infrequently. There’s a blessing in the fact that Paul didn’t become the senior pastor in one particular church.

The governmental power, to make decisions and set policy in churches, was instead given to the elders. This was a plurality of leaders, although there was always a first amongst equals. You can see this in Acts 13, when Barnabas, mentioned first in the list of leaders, is the one who makes the decision to bring Saul of Tarsus onto the team.

The elders would also often become apprentices of the apostles. Take Luke, for example, who was thought by Origen in the second century to be the one listed as “Lucius of Cyrene” in the Acts 13 list. He started out as an elder, but by the end of Acts, he was apprenticing under Paul. When people rose in leadership, they moved from local ministry to trans-local ministry. But the elders weren’t the big names; the apostles were. The elders changed regularly, but the apostles were constant.

So what could this look like today? The Church is blessed with excellent ministers, many of whom could fulfil a trans-local role. Perhaps we would do better to focus less on the megachurch pastor running the church day-to-day, and more on multiple people running multiple churches.

A great example of this was the late, great evangelist, Rev Dr Billy Graham. Dr Graham never led his own church, but many were greatly impacted by his message. He had symbolic power, but no governmental power.

The Queen’s legacy in the United Kingdom was that of stability. While many prime ministers came and went, she was a constant presence, symbolising an institution that lasted for centuries. Perhaps it’s time for our churches to split the symbolic and governmental powers apart and, in the process, create greater long term stability.

Chris BrightChris Bright is the co-founder of thinking.church, an organisation that exists to help churches strategically through facilitation, coaching and project management. Chris lives in Gloucester with his wife and two children