Conservative commentators are up in arms about Lightyear’s portrayal of same-sex attraction in a children’s film. But in creating a world where men and women are interchangeable, comedy writer James Cary is more concerned with its blurred gender lines. And it’s lack of humour 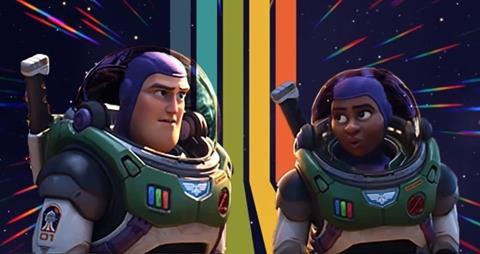 Fuel bills are through the roof and times are hard. Are you going to spend roughly £30 taking your kids to watch Lightyear at the cinema, or wait until it lands on Disney+ sometime in August? Of course, you may have already cancelled your Disney+ subscription after recent controversies surrounding their progressive agenda. If that’s you, Lightyear is not going to change your mind.

This is the movie that famously contains Disney’s first same-sex kiss. But gay relationships is not what the movie is really about. Lightyear is not about how our masculine, muscle-bound hero Buzz Lightyear needs to be more liberal and learn to accept people as they are. When his best friend, Alisha Hawthorne, kisses her wife, it is brief and Buzz doesn’t bat an eyelid. The story quickly moves on.

Yet conservative Christian commentators have been very angry about the inclusion of any same-sex attraction in a children’s film, no matter how short or incidental to the storyline. In response, liberal commentators have made fun of their consternation, unable or unwilling to see what the fuss is about.

You can understand their confusion. After all, the movie was scheduled for release during Pride month. And Pride has become mainstream now, compared to even five years ago. In a culture where the Ministry of Defence now displays the rainbow on its Twitter handle, progressives really can’t see why anyone would want to stop their children from watching Lightyear. After all, aren’t they being taught all this in schools? Yes, they are. And if they are not, they will be soon.

For some, the same-sex kiss is enough to prevent them from taking their kids to see the movie. But for me, Lightyear raises another question that doesn’t seem to have been ‘settled’ in secular culture. It’s about gender. Alisha and her wife don’t just kiss; they have a child. In a world of post-modern, authentic self-determination, women can conceive without men. One assumes a man was involved in some way, although maybe in the Lightyear universe, that’s no longer neccessary.

If your child is watching this movie, maybe they’ll ask about it. And if you’d like to have that conversation with them, go ahead. But it’s probably more likely that they won’t question it at all, because mainstream culture teaches that two people of the same sex can just have a baby – like a man and a woman can. Gender doesn’t matter. 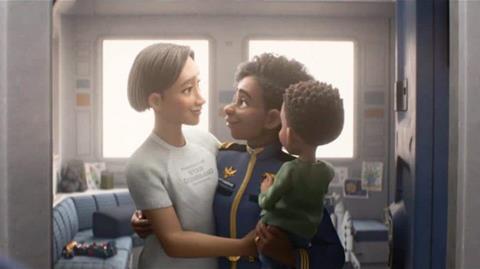 Alisha Hawthorne with her wife and child

And Lightyear is a movie in which gender really doesn’t matter at all. Of course, this has positive elements as well as negative ones. Alisha’s granddaughter, Izzy, wants to be a space ranger, just like her grandmother. She leads a small, rag-tag team of underdogs including an old female ex-con (although her gender is very hard to discern) and a cowardly Australian man.

While moving on from the rigid archetypes of the helpless Disney princess who needs rescuing by the swashbuckling prince is a big step forward, we’ve now moved to the far extreme position: girls can do anything boys can, from being a space ranger to having a child with another woman. In fact, men and women are interchangeable in Lightyear. But why should this surprise us? After all, we live in an age in which US Supreme Court judge Ketanji Brown Jackson recently refused to define the word “woman” because she’s “not a biologist”.

Made in God’s image

Christians know that men and women are both image-bearers of God; of equal value and one in Christ. But they are not the same. As we watch competitive sport tearing itself apart over this very fact, that truth comes into sharp focus.

All of the above issues might just about be OK, if the movie was as entertaining as Toy Story 2 (a benchmark in animation, movie-making and storytelling) in which Buzz is actually funny. Sadly, Lightyear is neither as comedic or poignant as its predecessors, and seems to lack a clear motive or message.

Lightyear sets itself up as a movie about our hero’s origin story, but Buzz really isn’t much of a hero this time around; he’s someone who needs to learn to accept help. While I don’t have a problem with a film where teamwork is the lesson – the Bible tells us in 1 Corinthians 12:12-27 that we are members of one body – it is a little underwhelming as a central theme.

And, as an origin story, it also falls short. At the start, we’re told that this is the movie Andy watched in 1995 which made him want a Buzz Lightyear toy. That seems unlikely, unless Andy was attracted to the idea of a space ranger whose greatest asset was the ability to accept help. So, for me, right from the start, the movie is based on something that simply cannot be true. And although I wanted to suspend my disbelief and go on an exciting journey, in the end, it just wasn’t giving me the buzz that I’d hoped for.