Does allowing same-sex marriage result in church decline? Here's what the numbers show

All of the denominations in the UK that are currently growing are those whose 'confidence in the authority of Scripture enables them to stand against progressive ideology’, claims the author of new research on church decline. But is it really that simple? Dr Ian Paul investigates 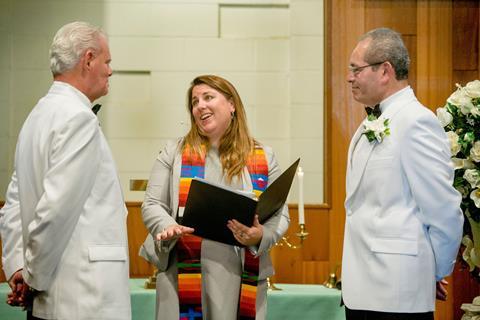 John Hayward is a Christian and a mathematician, and has been writing about the statistics of church growth and decline on his website, Church Growth Modelling, for many years. His most recent research presents a stark reality to churches in the UK. But alongside that, he offers some challenges to the direction that many are going in.

In the first stage of his analysis, he does several things. First, he simply looks at the growth and decline of a range of different denominations or networks, using research data and information from the churches themselves. At one level, this is not rocket science - but it is amazing how easily the national leadership of churches find it to avoid reality! What is very striking here is that almost all the pre-1900 denominations are in decline and all the post-1900 denominations or networks are growing.

From this, Hayward uses an idea that he first proposed in 1999, but which has now gained popular currency in the public discussion about Covid: the use of the R-number to measure effective spread of faith. His observation is that faith spreads - and, by default, churches grow - using the same mathematical dynamic as infectious disease. If a church has "enthusiasts” who share faith so that others come to believe, then that will lead to growth. Hayward qualifies this by noting that enthusiasm is time limited, in the sense that the enthusiasm of new converts can wane and, as they are integrated into the church community, their number of non-Christian relationships fall. In other words, churches which are seeing people come to faith will continue to do so, but churches which have few converts will have fewer still in the long run.

When culture becomes hostile to faith, people only attend church if it really matters to them

From this, Hayward presents the "reproduction potential” of UK churches - and finds that this matches closely with the actual data of growth and decline, suggesting that the model is a good fit to reality.

Finally, Hayward predicts when denominations will become extinct, which makes for grim reading. All the established Welsh and Scottish churches, along with the Methodists, will be gone by the mid-2040s, according to his models. The CofE and Roman Catholics will last to 2060 but, by 2090, even Baptists and Brethren will be gone.

This analysis needs some qualification. As Hayward himself says, this will only happen “if nothing changes”, and many churches are making changes. Whether or not it will be too little, too late remains to be seen.

To date, no growing church has adopted same-sex marriage

And it is important to note that, unlike most other denominations, the Anglican Church is a strange mixture of traditions and practices - some of which are growing healthily and others which are in precipitous decline. So the CofE will only die off if growth does not outweigh the decline - and at some moment in time, we are likely to reach a point where that does, in fact, happen.

Finally, Hayward’s research assumes straight-line decline, even though he notes that decline, like growth, is normally exponential; that is, a curve rather than a straight line. The reason for his approach is that this fits the data well - but also because individual churches and denominations actually drop off a cliff edge in their final days. The last members either jump ship or, if a congregation is all of a similar (elderly) age, within a short number of years, they will pass away.

In his second article, Hayward turns away from the purely mathematical to look at the relationship between theology and decline. Rather than use subjective judgements of his own or others, he looks at the reality of theology through the lens of the ‘shibboleth’ issue of same-sex marriage (SSM).

He differentiates on a spectrum between those opposed to SSM, those who have debated it, those who are considering it or have allowed it in part, and those who have adopted it in full. The result of this is more nuanced; the Catholic Church, Salvation Army and Brethren (who are all opposed) are declining but, tellingly, there are no growing churches among those considering the issue or who have adopted pro-SSM positions.

Hayward summarises his observations: “To date, no growing church has adopted same-sex marriage. All of these denominations hold firm to historic Christianity. Indeed, they are all evangelical in doctrine. Additionally, they have statements that affirm marriage as between a man and woman only – the historical and Biblical position. I propose that their confidence in the authority of Scripture enables them to stand against progressive ideology and drives their efforts in making disciples. They know what God requires of them in both behaviour and mission.”

It appears then - from statistical analysis and nothing else - that taking the historic view on the nature of marriage is necessary for growth, even if it is not, by itself, fully sufficient to ensure it.

Does this claim make sense? On the whole, I think it does, though we need to add some qualifications:

Firstly, we must be careful to not simply play a numbers game. If numerical growth alone is what a church is looking for, then the best strategy may be to adopt a prosperity gospel approach, promising each member wealth and riches! It goes without saying that numbers alone are never an adequate metric if separated from questions of faith, truth, and theology. However, numbers are people, and people matter. And it matters if, in a few years, there is no-one to proclaim the gospel to the next generation.

Secondly, I think Hayward’s conclusion makes sense in the light of history. In previous generations, when Christianity was ‘respectable’, attending church wasn’t a real measure of faith. But when culture becomes hostile to faith, as is increasingly so in the West today, people only attend if it really matters to them. And all through history, it is in these moments that being committed to the counter-cultural demands of faith makes all the difference.

Thirdly, it is striking that, in the Gospels, Jesus makes two things clear: first, that “the Kingdom of God has come near” (Mark 1:15) and that secondly, entering into that kingdom is “hard” for many (Matthew 19:23). Jesus emphasises that the promise of eternal life is within touching distance but, equally, being his disciple is a costly, challenging thing that will lead to loss, disruption and dislocation.