The Simpler Life, a new reality TV show from Channel 4, follows 24 urbanites as they attempt to live by Amish principles on a farm in rural Devon. Portia Berry-Kilby looks at what it can teach Christian viewers 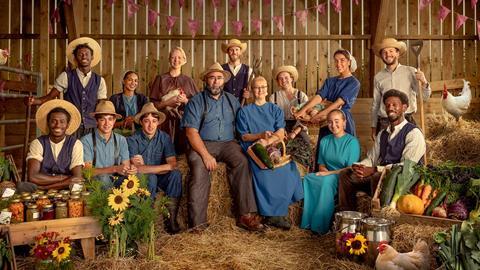 Sold as a “scientific experiment” designed to see whether the Amish way of life has an impact on the health, happiness and habits of 24 city-dwellers, The Simpler Life is a new reality TV show from Channel 4. The contestants move to a farm in rural Devon and attempt to live by Amish principles, led by example by the Millers, an Amish family. But beyond the sociological and emotional benefits, The Simpler Life communicates some deeper truths, of which all Christians could do with being reminded.

So what makes The Simpler Life such good Christian viewing?

1. The importance of community

The participants have all signed up for the “‘experiment” of simpler living for a wide variety of reasons, but many express feelings of loneliness or a desire for greater connection with others. After two years of Covid-19 measures restricting many of our everyday social interactions, it’s something most of us can relate to.

Putting 24 strangers together in a basic, rural location might make good TV, but it’s a risky manoeuvre. Those who can’t hack it leave fairly swiftly, but the core that remain bond remarkably quickly. For the youngsters on the show, who seldom had to bother about other people in their former lives, this new sense of belonging is a joy to see.

The Simpler Life also conveys the importance of family in a subtle, yet powerful, way. A particularly moving moment occurs when 28-year-old content creator, Victoria, develops a deep bond with Edna Miller, the Amish mother. Victoria opens up about her lack of close relationship with her own mother and, in Edna, she finds both a maternal figure and role model. Not to give away any spoilers, but when the Amish family leave the participants to their own devices and depart from the farm, I’d be surprised if any viewer does not feel compassion for Victoria. It really does feel like a family departure, with all the heartache that brings.

Forgoing modern comforts can be tough, especially if consolation cannot be found in the transcendent

While many singletons on the show are searching for meaning, the Millers have already found it. Other factors undoubtedly play into their contentment, but there’s no shying away from the happiness their family unit brings them.

As Lent draws to a close and we reflect on the ways in which we’ve (inevitably) failed to keep up any Lenten penances we decided to adopt, we are reminded that, as Christians, we might not be as detached from the material world as we would like. But seeing 24 urbanites shipped off to rural Devon without phones, makeup or chocolate reminds us that material detachment is, in fact, possible.

Some participants have a harder time adjusting than others, but a strong core succeed. “We need food. We don’t need alcohol,” is one revelation made by a participant when arguing starts over whether a few beers could be introduced to the farm. Some other participants want a radio, to dance or keep up with the footie, but later, the radio is returned and a renewed commitment to a lack of materiality is made. Any Christian could learn a thing or two from these Amish LARPers about living simply.

4. Traditional can be good

In order to fully embrace their Amish lifestyle, the contestants get stuck into traditional gender roles. With the women in the kitchen, cooking and doing the laundry, the men show off their brawn in the fields. For some, being confined to kitchen chores is aggravating but, for many, the roles are liberating, offering the opportunity to foster fraternal or sororal bonds. In such circumstances, the gender stereotypes seem less cliché and more of a chance to learn something about oneself in a supportive environment. Far from finding it stifling, one participant reflects that she’s discovered she can be a “homemaker”.

For a 21st Century TV show - on Channel 4 no less - to present seemingly-outdated stereotypes in a neutral, and arguably positive, way makes a pleasant change. While I hope The Simpler Life doesn’t send girls running to the laundry room, if it reduces the taboo surrounding individuals freely choosing a home-centred way of life (should they wish for it), I’m glad.

5. It doesn’t always go to plan

The Simpler Life clearly communicates the message that we do not always get it right. The lifestyle does not agree with everyone - in fact, the dropout rate is high and departures happen quickly. Without faith in God as a driving force for withdrawing from the modern world, such a low success rate is perhaps not too surprising. Forgoing modern comforts can be tough at the best of times, let alone if consolation cannot be found in the transcendent. But ultimately, the participants are there to learn, and it’s good to see those who persevere when things don’t go to plan.

Tears, stress and cross words may get in the way of perfect harmony, but this is real life. The Simpler Life reveals human brokenness but also the resolve to improve. In short, it shows hope.

It’s more than just the scientific community who can learn a thing or two from this Amish reality TV experiment. Watching others adapt to a simpler way of life can remind Christians of its value too. Who knows, it might even have a few of us homesteading by the end of the series.

The Simpler Life is available now on All 4