Belfast has been tipped for 7 Oscars. Here’s what Christians can get out of it

Kenneth Branagh’s film doesn’t offer us a deeper insight into Protestant-Catholic relations but it does remind us that faith can always be weaponised, and Christians must have compassion on those who are fleeing violence 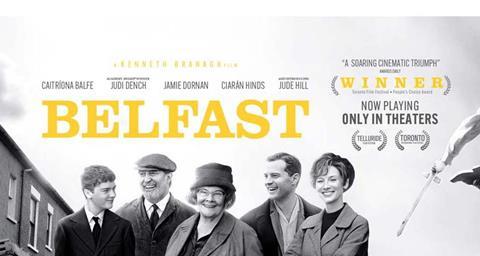 It could have been called Beirut. Or Mogadishu. Or Damascus. Any name that conjures a two-dimensional picture of a place and a people defined by a single terrible narrative. But Belfast, Kenneth Branagh’s love letter to the city of his childhood, offers something more than misery and violence. It offers the beauty, banality and variety of human life lived anywhere – even places whose names are synonymous with violence.

If you judge someone for fleeing a situation that has become intolerable, you ignore the years of agonising over the decision

Critics have disliked this about Belfast, a film rooted in the viewpoint of a small boy in 1960s Northern Ireland. Some have called it a chocolate box version of the Troubles, set to a jaunty Van Morrison soundtrack, that fails to fully engage with the reality of the politics and terror of that time and place. The suggestion is that Branagh has sacrificed truth for beauty. I think he has done something far more interesting (with, it must be said, a wonderful soundtrack). He has told a truth that often gets sacrificed in films about difficult places and periods of history: that people are people and much of life will be ordinary, small, funny and beautiful, even when surrounded by conflict.

That’s not to say Belfast completely ignores Northern Ireland’s occupation and the sectarian violence that defined the late 60s (and, sadly, the decades since). Mobs prowl the streets. Checkpoints and soldiers impose themselves on human landscapes. And Protestant and Catholic families alike live their lives under a cloud of fear. But that is the point. They live their lives. They fall in love, they cherish grandparents, they struggle financially and romantically. They live.

Branagh’s award magnet may not tell the whole, awful story, but it lays out some universal truths in stark black and white. That occupying armies always dehumanise the civilian populations they patrol. That political instability and unrest always make room for bullies and gangsters to ride roughshod over ordinary folk. And that religion, when used as a tool to divide people, is almost always toxic.

The truth about faith

Religion gets a bit of a bad press in the film, but it’s hard to call its portrayal inaccurate. A fulminating preacher becomes the embodiment of hell as he preaches, and children are left to sort through the aftermath of terrifying images to make some kind of sense of how they might be safe. Countless films have done this with growing up Catholic, so it is nice to see Protestant preaching getting the same deserved stick.

But if one thing about Belfast jars, it is the occasional glib reference to all the larger problems being caused by ‘religion’. As with most new atheist rhetoric around religion being at the heart of most historic and contemporary conflict, this view is laughably naïve. It imagines a world without greed, national interest and industrial appetites driving violence. It pretends that powerful nations do not invade and occupy smaller nations. It suggests that the tools used to keep people divided are somehow the cause of the trouble.

As Christians, we know that our creeds, our sacred texts and even our faith can be misused by fools as well as rulers and principalities. Yes, ordinary folk from Bethlehem to Belfast buy into the lie that God needs us to kill others to keep him safe. But, usually, they do so because their faith has been weaponised by those who seek to profit and gain ground – be they conquerors or freedom fighters.

As Christians, we know that our faith can be misused by fools as well as rulers

Belfast doesn’t delve into this, but, then, it doesn’t have to. It’s not trying to teach us anything except that real people live here. It’s a film both deeply immersed in a specific place and time, and a film about a repeating human experience: of loving the place you call home, but feeling driven to leave it. If Christian audiences get anything out of this film, it will not be a deeper insight into Protestant-Catholic relations or imperialist power and its insurgents, but an insight into why people leave. And the lessons, I think, are clear.

If you judge someone for wanting to flee a situation that has become intolerable to them, you ignore the years of agonising over the decision. You may lack empathy or basic humanity; or perhaps the view comes from what you’ve been told, taught or sold by politicians or the media. But it is not of God. A film like Belfast is valuable because it may help some people to see and understand the human stress and strain of living in dangerous and difficult places, and why people might feel compelled to leave. Hopefully it will help some of us avoid committing blasphemy against the child who was exiled to Egypt or heresy against the teacher he became – Jesus, who preached mercy and love above all things.

There is so much joy in this film, but we would be missing out if we ignored its lessons.