Why it’s dangerous for Christians to fit in 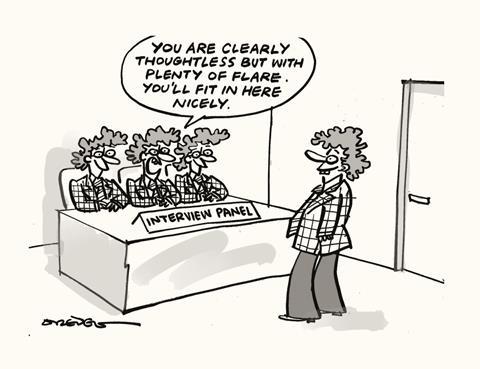 The photograph hangs in our hallway, a black and white reminder of a beautiful, blue-sky day. The shot features a smiling young couple standing on the steps of a church, married just minutes earlier. Kay and I tied the knot in 1978, the year when the first cellular phone was introduced, Grease was the hot new movie, some of the greatest music in history was produced and the clothes were hideous. Looking back, it seems that a fashion demon roamed the earth, mugging all and sundry, including us.

That photograph shows me wearing a suit jacket with lapels so wide that a gust of wind could have swept me off to Sweden. I’m wearing flared trousers, big enough to act as flaps during my flight to the land of Abba, who, by the way, were champions of truly awful attire.

Back then, I had plenty of hair, which was permed. My curly fringe stuck out, forming a potential rain shelter for children and small animals. I’m biased, but Kay looked beautiful, even though her wedding dress was a flouncy nightmare. Guests viewing the photo ponder Kay’s loveliness, stood next to nerdy me, and usually ask her a question: “Why?”

We also have questions, but not about why we married. We wonder why we considered those fashion choices to be attractive. What were we thinking?

The answer to that is simple – we weren’t. We were just following the trends. Only in looking back do we stand amazed at the atrocious garb. Like the rest of the world, we just went along with the crowd. We humans are rather gifted at that.

Ancient fashions may make us smile, but there are far more serious consequences to mindlessly following the barked orders of our culture. In a world where values and norms are shifting at warp speed, those who follow Jesus can feel intense pressure to march along to the beat of culture’s drum. Christians have always been called to be nonconformists, regardless of the denominational club that we’re part of. The apostle Paul, who caused riots everywhere he went, offers us a clear challenge, still relevant today: “Don’t become so well-adjusted to your culture that you fit into it without even thinking” (Romans 12:2, The Message).

But this is easier said than done. Step out of line with the consensus, and we quickly find ourselves tagged as intolerant and bigoted. Ironically, the worshippers of tolerance frequently refuse to tolerate a dissonant voice, even if that voice is generous and kind. And then there are real concerns about biblical illiteracy among believers. Some of us don’t really know what scripture has to say on controversial moral issues, and worryingly, we’re not overly concerned about our lack of clarity. All this can create a lethal cocktail where we dash, lemming-like, to thoughtlessly agree. The final nail in the coffin comes when those who teach and preach back away from hotpotato topics, like sexual ethics, gay marriage, or vaccination conspiracy theories. Biblical dialogue is cancelled because there’s fear of the backlash that might result.

We’re called to be people who wrestle with scripture, including the bits we don’t like. If we are to be faithful, and known as Jesus’ disciples, thoughtful reflection and gracious courage are called for, especially when culture contradicts Christ. Docile, mindless adherence will surely cause the salt to lose its flavour, and dim the light of love that we are called to be.

And if you need a tie big enough to double as a tablecloth, just know that I’m your man.