The NBA basketball player Stephen Curry is a Christian athlete known for inscribing Philippians 4:13 on his trainers

It was one of those Christian gatherings that felt like a cheerleading session. The preacher was working up a serious sweat as he dashed around the platform, his bald head shining.

“We need an army of people who will rise up in the knowledge that, through Christ, we can do ANYTHING!” he bellowed. The ebullient congregation, apparently unconcerned about this red-faced minister’s blood pressure, roared their approval, amens echoing around the building.

As often happens during these occasions, a mosquito-sized niggle began buzzing around my brain and, by now, those pesky question marks had morphed into an alarm bell.

The theme of the message was that frequently misquoted statement of Paul’s: “I can do all things through Christ who strengthens me” (Philippians 4:13, NKJV), a text that adorns many Christian refrigerators and is often quoted by believing athletes.

The thing is, I can’t do all things, and neither can you. I can’t give birth to twins, play the bassoon, speak Cantonese or fly without a ticket. And the preacher who said we could do anything can’t either. He’s unable to dash around without perspiring, preach without yelling or (like me) perm his hair, seeing as there’s a shortage of it.

I can, however, do that which Jesus calls me to, because he will equip me for that calling. But that does not mean a life with no limits. Paul penned those words while stuck in prison and so, during that season, even he couldn’t do some things, including popping out for a stroll.

It’s also a good idea to know what we should not do. I used to lead worship, until the blessed day when a faithful friend gently informed me that the church would breathe a huge sigh of relief if I would just hang up my guitar – forever.

All that said, I’ve recently been inspired by Mabel, a sprightly, beautiful 87-year-old member of our congregation. Lovely Mabel has a smile that can light up a room.

She came to Christ as a 13-year-old, and quickly discovered an acute hunger for scripture. Having met the love of her life, Ed, at Bible school, the two married and pastored churches for three decades before becoming missionaries, serving in Taiwan, Alaska and Japan.

When she was a child her grandfather gave her an old piano and she developed a love for music. Thousands of hours of tuition and practise have paid off – listening to her play at church is a joy. 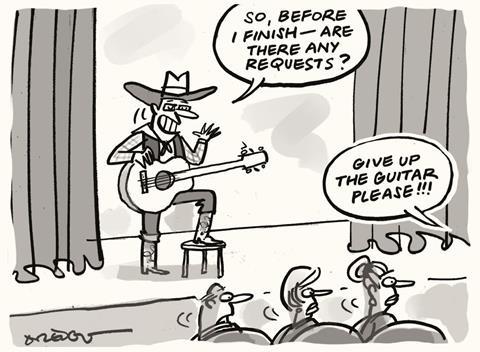 But what makes her virtuosity so impressive is that Mabel was born with only one hand. Her right arm ends just before the elbow. She has no forearm, just tiny buds where a hand should have developed.

Just two years ago, after 64 years of marriage, Ed passed away after a battle with cancer. He shared Mabel’s can-do attitude. “Don’t sit around feeling sorry for yourself after I’ve gone, Mabel,” he told her. “God has still got a lot for you to do.”

And so she is doing just that. Mabel is a consummate encourager and prayer warrior. “I’m not extraordinary,” she told me. “I just want to glorify Jesus, and I want people to know that his word is true.” At a recent meeting, Mabel prayed for me.

After she’d left, I felt renewed, refreshed and more determined to follow Jesus, all the way home. My tenacious one-handed friend helped me to realise that while I can’t do anything, with Christ, I can do a lot more than I think.