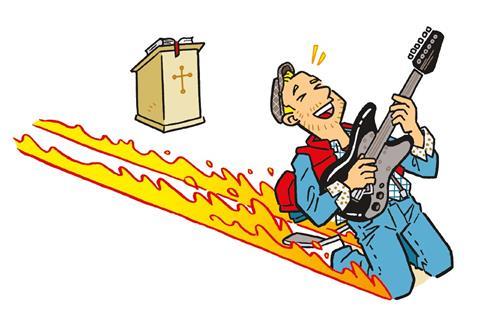 I started playing guitar because of that scene from Back to the Future. Any child of the 1980s knows immediately what I’m talking about: Marty McFly’s blistering ‘Johnny B Goode’ solo. As I watched it, my jaw hit the floor.

The combination of the stunning musicianship, the energy and the stage craft made the performance completely unforgettable.

It was a defining moment in my pre-teen life. I obsessively dedicated myself to learning the piece, drilling it until I was able to not only play it competently while seated or standing, but until I incorporated the knee slides and jumps from the movie too. I even learned to play it behind my head as a party trick. In short: I was inspired.

Fast forward ten years. I had just become a Christian, and was swept up in the honeymoon of my faith. I could hardly believe it when I was asked to lead worship at our youth group. Finally, I had an opportunity to use the skills I’d been honing behind the scenes to express the insane joy I was experiencing in Christ.

Then I was taught the ‘rules’ of worship music. My enthusiasm deflated like a cheap air bed.

It was my sacred duty to resist the temptation to play colourful solos or sing any acrobatic lines. I was to shrink into the background, playing parts that were barely noticeable. My musicianship was a distraction that had the potential to steal glory from God.

Being new to the faith, I swallowed this spiritual-sounding nonsense. But I couldn’t feel more differently now. I no longer believe in an insecure God who is somehow threatened by my B+ guitar solos. Especially since Psalm 33:3 expressly tells me to “Play skillfully with a shout of joy” (NKJV).

No, I believe in a proud heavenly Father who takes pleasure in seeing the gifts he wrote into my DNA coming to life. God isn’t glorified by clipping our wings. He wants me to shine; it’s all a reflection of his light anyway.

I also reject the notion that complex, intricate musicianship is a distraction from the heart of worship. That’s not how music works. The best artistry draws us in deeper, allowing us a more profound experience. Think of the impact of Handel’s Messiah: it’s a work of nuanced genius requiring incredible virtuosity.

You could say that it’s completely over the top (by modern worship standards). Yet the effect is distinctly worshipful: the Messiah himself is amplified and given centre stage by the skill of the performers.

That said, maybe you remember how Marty McFly’s performance ends. Playing a lot of complicated parts, he eventually gets so lost in his own ego that he crashes and burns, leaving the audience lost and confused. Sometimes, keeping it simple is actually an expression of skill. Mastery can look like restraint.

The Bible tells us that “where the Spirit of the Lord is, there is freedom” (2 Corinthians 3:17). That means our worship needs to be free from restrictive, legalistic ideas that hamper our expression. So go ahead, throw your guitar in the back of your DeLorean and start practising those knee slides.