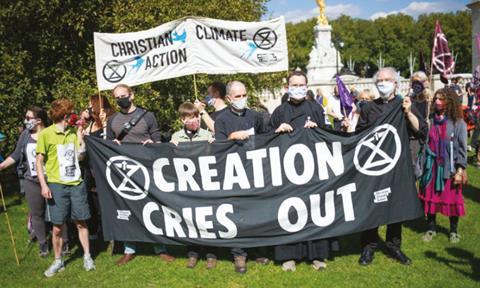 My eyes used to glaze over at the mention of ‘climate change’ or – as it was known when I was growing up – ‘global warming’. As someone who was more arts and humanities than science, there was a fundamental disconnect between my actions and how they related to rising sea levels or increases in temperature. How could me not recycling a plastic bottle lead to floods, droughts and storms in other parts of the world?

To be honest, the science still makes little sense to me, but I’m convinced by those who are much more qualified. Like the UN’s Intergovernmental Panel on Climate Change (IPCC), who recently gave a dire warning that human activity is changing the climate in unprecedented – and in some cases, irreversible – ways.

This “code red for humanity” is terrifying, and it’s time for the Church to take climate action seriously and resist the urge to relegate it to the pile of all things ‘woke’.

I understand the tensions for Christians with particular eschatological views about how the end of things might turn out: as people looking towards a time in which Christ returns and restores all things, does it really matter what happens to the planet in the future?

But the future is precisely the thing that makes me pay attention. Because it involves our children. It’s this anxiety, about the earth that my son will inherit, that led me to join the Mothers Rise Up march in 2018 – one hand holding my banner aloft and the other pushing my son’s buggy. It’s our children and grandchildren who will ask us what we did to combat climate change when we had the opportunity to do so. Like generations before asked their grandparents what they did in the war, our children will ask us whether we took individual action or urged our governments to take radical steps to make a difference. Are we prepared to tell them that we didn’t believe the scientists, or we didn’t like the leftie liberals who were urging us to switch to sustainable forms of food and transport? Are we prepared to tell them that we didn’t bother to steward the earth because we thought that Jesus might come back soon?

This is also a mission issue. The Church has to engage with climate change because it’s what young people care about. Last month, a new survey by University of Bath revealed that 60 per cent of young people are very worried or extremely worried about climate change, with 45 per cent of them saying it affected their daily lives. For three-quarters of those surveyed, the future is frightening; more than half think humanity is doomed.

Surely this is a moment for the Church to step in. Not just to give young people hope in things beyond this world, but to show them that we’re not blind to the biggest issues facing humanity, or prepared to turn our backs on those in the global South – young and old – who are suffering disproportionately from the effects of climate change.

As the UK hosts the COP climate summit in Glasgow in a few weeks’ time, let’s show the world that the Church cares about the future, not just about clinging to the past.