A new report into family life shows one in four families are now headed by single-parents. Drawing on her own experience as a child of divorce, Rebecca Chapman says the Church has a vital role to play providing the “protective effect” children desperately need 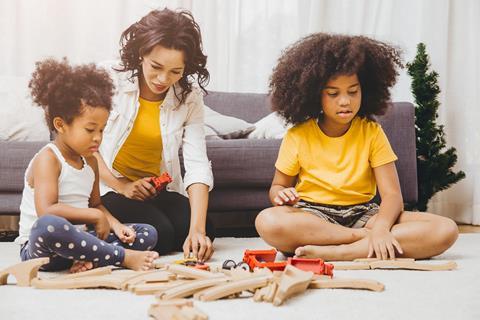 There are lots of things about my childhood that I used to think were normal. Wearing fetching 1980s lime-green tracksuits, for example, or sporting unflattering pudding basin haircuts.

Crossing car parks clutching a suitcase, being shuttled from parent to parent was less common, as was having a parent cry a lot and threaten suicide. Although my life was ‘comfortable’ and full of privilege – a private all-girls school, a series of au pairs, music lessons, even ballet for a while (until I became a tomboy and refused the tutu) – all the middle-class trappings in the world didn’t magically undo the huge impact of separation and divorce.

The government recently published the first part of its Independent Family Review – a report commissioned to understand the modern family in England. The results show that now nearly a quarter of families are headed by a single parent; half of those born in 2000 spent at least some of their childhoods in single-parent households, compared with just over a fifth of those born in 1970.

Previous research shows children raised in single parent families generally do less well academically, and are at increased risk of poor mental health . We know single parents also experience higher levels of depression, chronic stress and loneliness than those who are married.

The Children’s Commissioner launched the review highlighting the “ability to rely on family ‘a lot’ in time of crisis is associated with significantly higher overall well-being”. The review describes “the protective effect” that such a family provides: the presence of “emotional connection… shared experiences… strong, positive, and enduring relationships and the ability to depend on one another for practical and emotional support”. The Children’s Commissioner calls this a “power that provides a shield from life’s challenges” but acknowledges that for many this support might include grandparents and family friends.

When my parents split up, the “protective effect” was provided by my church family. Week-in-week-out, as I moved up through each of the children’s and youth groups, the volunteers were there for me. Stickers and encouragement when I remembered bible verses gradually became tea, sympathy and prayer after break ups.

For me, Church was my place of security and safety, the place I would instinctively run to when upset, even during the ‘behaving badly’ years – drinking behind the church or sitting by the church porch in the early hours. Church was where I could find calm and the people I could rely on in a crisis – a place where I belonged. I went on to study theology at university, and on bad days I could be found in Durham Cathedral – old habits die hard (or perhaps train a child in the way she should go…).

This year will bring increased stress and pressure in many homes (and marriages) during the cost-of-living crisis. Providing a place of welcome and safety for young people, obviously needy or not, will be vital. Young people from single-parent families don’t need to be told their behaviour is wrong; they want to know they are loved, by you, by your church, and by God.

Their parents also need encouragement – bringing up children can feel gruelling at the best of times, even as a team of two. We need to tell single parents that we see them doing their best, that they’re doing great, and to ask how we can help. Many single parents are utterly amazing people. For them, having to do it all is their ‘normal’.

I used to think my childhood was ‘normal’. It wasn’t, nor was it even predictable. But I knew God loved me, and he was constant – I had his church, full of love, where people had always been happy to see me and ready to listen if I wanted to talk, with no judgement. They provided the “protective effect” during my parents’ divorce, re-marriage and then another divorce.

My mum has since been diagnosed with a serious life-long mental health condition, which makes sense looking back. Now I’m married with three sons I can see just how unusual some aspects of my home life were. But I have always known God loved me because the church I grew up in was there for me, providing the calm consistency I needed.

It’s tempting to read this new review and cheer the reminder of the positive impact the nuclear family has on children, but let’s also consider the (almost) one in four children currently in lone parent families, and the many more who will be in the future. As church communities how can we do more to provide “the protective effect” that we now know many of them need?

Parenting help and resources from a Christian perspective are available now at premiernexgen.com

Rebecca ChapmanRebecca Chapman is a mum of three from London, a lay member of the Church of England’s General Synod, and a trustee of Christians in Media.