I wasn’t well behaved at Trooping the Colour, but now I’m so grateful for the Queen’s steadfast example

Jeff Lucas shares a story from his childhood, when he attempted to interrupt the Queen’s official birthday celebrations 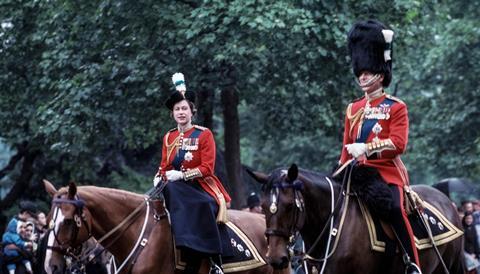 It was Trooping the Colour, the day when the monarch’s official birthday is celebrated with a glorious parade. Her Majesty Queen Elizabeth, resplendent in her Guards uniform as their Colonel in Chief, rode an immaculately groomed horse.

The crowds that lined the Mall clapped and cheered and waved a thousand Union flags, a chorus of appreciation and affection.

But not all the voices were united.

Two rather silly boys ran alongside the parade, yelling inappropriately at the Queen. Glares from the crowd and calls for them to hush were ignored, although their rudeness was more naughty than malicious. And Her Majesty could have turned her head and shot them into silence with a withering glare. But she did not. Head held high, face fixed, she rode on, impervious to the disruption.

And that is what our gracious Queen did. She rode on for 70 years of service, eyes forward, through tsunamis of family turbulence and earthquakes of cultural change. She came so young to the throne in 1952 in a world that bore very little resemblance to the world she left in 2022. Her whole life lived under the glare of the world’s media, billions of words were written about her and her family. The domestic turbulence of the House of Windsor became the fodder for the smash hit series The Crown, a mingling of fact and dramatic licence. Even in deep grief she found herself on stage, sitting alone, hunched over in sadness, at the socially-distance funeral of her husband Phillip, the Duke of Edinburgh.

Other trials were to come. Prince Andrew entangled with the disgraced Jeffrey Epstein. The tell-all book from her grandson Harry. Whispers of racism in an interview with Oprah. There must have been so many times when she wanted to speak up, defend, clarify, dispel the rumours, especially when the rumour mill was peddling fiction. But through it all, she held her tongue, held her nerve, and continued on, face forward. Little wonder that on the day of her death, the Washington Post described her as ‘an inscrutable beacon of continuity’.

In celebrating her remarkable life of service, we must not canonize her and dub her as a flawless saint. When Princess Diana died, there was criticism about Her Majesty’s initial silence for five long days, and then the refusal to lower Buckingham Palace’s flag to half mast. Perhaps her determination to honour tradition and protocol made her seem a little distant in that time of national anguish.

But the outpouring of goodwill that marked her 70th Jubilee event celebrated this truth: she stayed the course and finished well. And her very public pledges of allegiance to the King of Kings, Jesus Christ, were bold and clear.

How well I remember her eyes-front stance that day at the Trooping of the Colour, for I confess, with some embarrassment, I was one of those loud mouthed lads.

Growing up and growing old, hers is the only reign that I’ve ever known, and I’m so grateful for her steadfast example. I’m reminded of that resolute King of ours, who as the Old Testament prophet described, “set his face as a flint” (Isaiah 50:7) headed ultimately towards a splendid throne, but went there via Calvary’s cross. And I’m nudged to be found faithful, vigilant, determined, eyes forward and fixed on that same Jesus, all the way home.

God save our gracious Queen. May she rest in peace, and rise in glory.