Heidi Crowter: ‘We are amazing just the way we are. Please accept us.’

The Christian disability rights campaigner is heading back to court, continuing her fight for an equal right to life for all 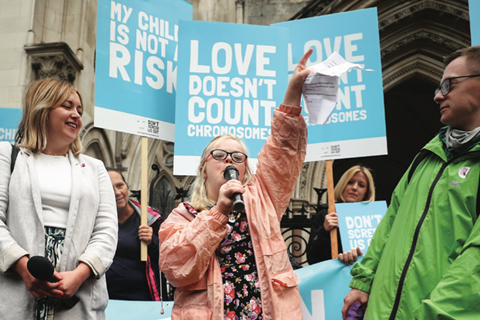 When Heidi Crowter first found out that an unborn baby with Down’s syndrome can be aborted at any point up until birth, she was enraged. “What’s the difference between my nephew [who doesn’t have Down’s syndrome] and my husband [who does]?” she asks me emphatically when we speak. “Nothing! I see no difference!”

Crowter, 26, is vivacious and bubbly. Her social media bio “Heidi Crowter – Living the Dream!” sums her up perfectly – she loves her life, and passionately believes that babies with disabilities deserve the same rights as everyone else, and that current UK law discriminates against them.

Under the 1967 Abortion Act, babies can be aborted right up until birth if they are deemed to be “seriously handicapped”, a description which includes Down’s syndrome. For campaigners such as Crowter (who has Down’s syndrome), this is an outdated throwback to a less medically advanced, less tolerant society. They argue that better pre-natal screening means that most disabilities are picked up early enough to allow parents choice under the existing 24-week window for legal abortions. And better ante-natal healthcare means that children born with Down’s syndrome now enjoy good health outcomes, with life expectancy having increased from twelve years in the 1940s to 58 years in 2018.

Alongside this, attitudes towards disabilities have undergone a seismic shift. Today, there is an increased societal expectation that people with disabilities should no longer be hidden away, and should have equal access to the same education, employment and life opportunities as anyone else. In 2019, Ellie Goldstein became the first model with Down’s syndrome to represent Gucci. In 2020, star of The Peanut Butter Falcon, Zach Gottsagen, became the first person with Down’s syndrome to present an Academy Award. And when CBBC recently announced the appointment of their first presenter with Down’s syndrome, George Webster, it was met with universal approval. Crowter, like many people with Down’s syndrome, is married, lives independently and, prior to Covid-19, worked part-time. 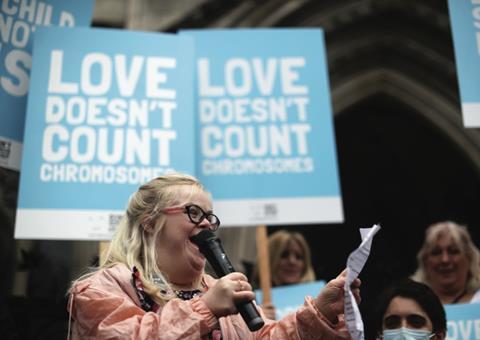 Yet in the UK in 2018, 82.5 per cent of babies diagnosed with Down’s syndrome before birth were aborted – a result, at least partly, of “discriminatory legislation, policies and practice”, according to campaign group Don’t Screen Us Out. Parents talk of being pressured into having abortions after learning their child may have Down’s syndrome, even when they have made their wishes clear, and of doctors and nurses delivering the news with sadness and regret, automatically framing it as negative. It is this dichotomy between ante- and post-natal attitudes to equality that motivates Crowter’s campaigning.

Her views have put her at odds with secular pro-choice campaigners, who she says are intent on focusing on her Christian faith as a way of writing her off. But while her faith is clearly important to her (“I’ve got a big faith!” she declares with a grin at the start of our conversation), her campaign isn’t about religion. In Heidi’s own words, as she addressed crowds outside the high court in July 2021, it’s about challenging the “downright discrimination” of a law that “makes me feel like I am better off dead. There is no difference between me and someone who doesn’t have Down’s syndrome. Life is good for people like me, and abortion law needs to show that everyone is equal.”

As far back as 2017, the United Nations Committee on the Rights of Persons with Disabilities recommended that the UK change its abortion law to offer all babies, irrespective of disability, the same right to life. The government declined to accept those recommendations. Now, Crowter, together with Máire Lea-Wilson, whose son, Aidan, has Down’s syndrome, are legally challenging that decision.

During their high court case, Heidi and her team argued that existing UK law was incompatible with the European Convention on Human Rights (ECHR). However, the court ruled against them, saying that there was no precedent from the ECHR that a foetus has a right to life, and that existing legislation balanced the rights of pregnant women with the interests of the unborn child. Despite the setback, Heidi and her team will take their case to the court of appeal next month. In a recent interview with Christian Concern, Crowter was asked how she found the strength to carry on. She simply replied: “If God is for me, who can be against me? The love of Jesus convinced me to carry on. I will not give up fighting for equality for me and my husband and others with Down’s syndrome.” 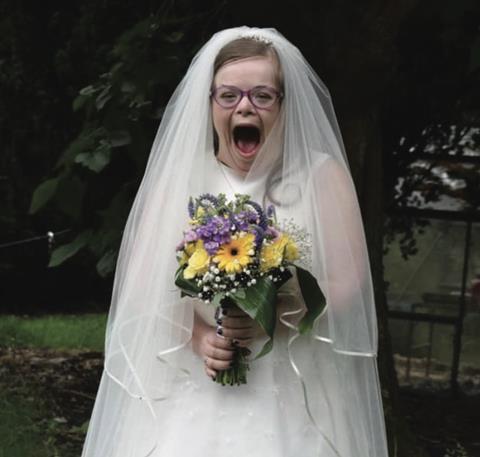 Tell us why you feel so strongly about this issue?

Could you tell us how you became a Christian?

I was born into a Christian family. It was quite hard at first, because I was in and out of hospital a lot. I don’t remember all of it, but I do remember that I became a Christian when I was about twelve. I can’t really pinpoint a moment; I feel like it was a gradual process. It was through a man called Paul Watts – he was my pastor, and he’s probably my best Christian friend. We have a great relationship; I can see Jesus in him. I basically became a Christian through seeing his example. And the verse that saved me was John 3:16: “For God so loved the world that he gave his one and only Son, that whoever believes in him shall not perish but have eternal life.” It’s my favourite verse! Ever since I walked into my church, they’ve been amazing to me. They absolutely love me!

Do you get nervous or scared when you go to court?

I’m usually trying not to fall asleep because it’s boring! I’m not normally nervous but, if I am, I just think about the story of Esther in the Bible. Well, it’s not the story, I like the person. Because she was strong enough to save her people. I just keep looking to heaven. One day, it’ll all be perfect. My energy is probably from Jesus and my faith. I think it’s my faith that keeps me going!

How have you coped with all of the media attention?

It is hard sometimes, as some journalists do try to steer me the wrong way [and] get me to speak about other stuff, not really about the case. They always talk about abortion as a whole, about how I think that abortion is wrong, but it’s not about that. It’s not about faith. It’s about the discrimination.

How can Christians pray for you as this court case goes forward?

I’d like people to pray for me, because I get a lot of backlash sometimes, from not very nice people.

HAVING DOWN’S SYNDROME DOESN’T DEFINE WHO I AM

One of the people who works for the British Pregnancy Advice Service said on Facebook – and it was quite hard to read – they said: “No woman should not be able to have an abortion because of Heidi Crowter.” So you can pray that I get protected from that. And I’d also like you to pray for success for the case; that people will actually have their hearts changed.

We’ll go and get a glass of prosecco!