Even silent prayer is banned inside abortion clinic buffer zones. There’s no place for them in a democracy

Bournemouth recently became the latest council to make prayer, protest and offering counselling illegal outside abortion clinics. But now the government is planning to make it law across the UK. It’s an erosion of freedom of expression that has wide-ranging implications, says Danny Webster 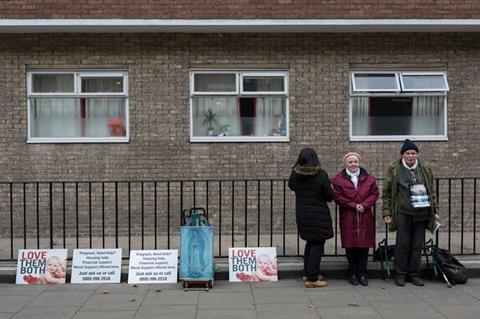 Pro-life campaigners opposite a Marie Stopes clinic in London

The 2019 Conservative manifesto included a commitment to champion freedom of expression and tolerance. If the new prime minister is serious about honouring the pledges made at that election, removing buffer zones from the Public Order Bill should be one of its next acts.

More broadly, the whole approach of the bill is to give the police greater power over protestors and to restrict the parameters within which free speech is permitted. The government tried to introduce many of these powers during the passage of the Police, Crime, Sentencing and Courts Act earlier in the year. They were defeated in a series of votes in the House of Lords and, due to procedural reasons, could not override the House of Lord’s veto. The Public Order Bill is also expected to meet with stiff opposition when it goes before the House of Lords next month, but the government may use their majority in the House of Commons to ensure it passes this time.

A freedom worth having

Freedom of expression requires letting people, with whom you may fundamentally disagree with, speak. It means allowing people to speak in ways that you find insulting and offensive. The seminal judgment from Lord Justice Sedley in 1999 declared that: “Free speech includes not only the inoffensive but the irritating, the contentious, the eccentric, the heretical, the unwelcome, and the provocative provided it does not tend to provoke violence. Freedom only to speak inoffensively is not worth having.”

What the government is currently proposing will override this vital legal principle and shut down free speech. There are many opponents of this proposed new law: climate activists are outraged that it would stop their attention grabbing direct action protests and anti-racism campaigners are concerned that they could end up treated more harshly than those they oppose. The bill will also create an offence of being suspected of intending to cause disruption.

My daughter’s life was saved because of them. Please don’t criminalise offering help to women when they need it most

These concerns have received strong backing from the liberal press. This week, The Guardian noted that many historic protests, such as suffragettes chaining themselves to the gallery in parliament, would have been illegal under this new law. However, such outcry has been silent on the ban on people praying within 150 metres of abortion clinics.

This is the problem with much of the defence of free speech: we place our own limits on how far that freedom should extend, and that undermines this fundamental human right. Someone extends more tolerance to protest actions if they agree with the purposes of the protest than if they disagree. While understandable, that is simply not a basis for using majority rule to limit expression on certain issues.

What does the proposed Buffer Zone amendment do? 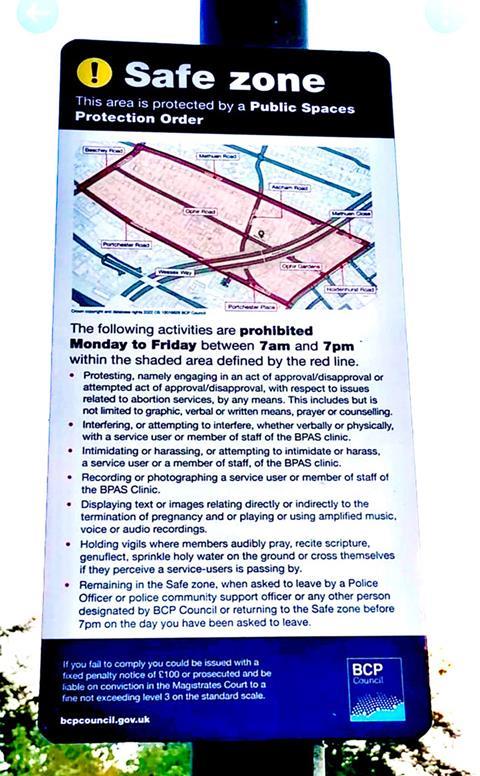 The amendment bans any act that seeks to interfere with access to abortion services within 150 metres of the premises or entrance. This includes intimidating and harassing behaviour (which is already illegal) but goes far further. To be clear, anyone seeking to offer advice, support or prayer for women considering an abortion should do so with compassion and care. Harassment and intimidation do not reflect what it means to honour the dignity of all people created in God’s image.

The proposed provision also covers any act that advises or persuades, attempts to advise or persuade, or otherwise expresses an opinion. This is not about the opinions of those protesting or praying, but that they would dare to try and persuade others of their view.

But this hasn’t reached the zenith of illiberalism of this measure. To fall foul of the new rules, you don’t even have to say a word. You just have to be there more than once, because to “continuously, persistently or repeatedly occupy” is also classed as interference. The amendments proponents have made no secret that this would stop people from holding a silent vigil outside the entrance to an abortion clinic. What is proposed under the headline of stopping harassment is swiftly followed by stopping people from silently praying on a public street.

Campaigns such as ‘Be Here For Me’ have emphasised the value of support that women considering an abortion can receive. One woman commented: “The support I received from peaceful volunteers outside the clinic where my abortion was scheduled changed my life. My daughter’s life was saved because of them. Please don’t criminalise offering help to women when they need it most.”

This is not just about tolerating views that some may disagree with, it is restricting lifesaving advice and support.

One under-reported aspect of this proposed new law is that the activity does not have to take place on public ground; it affects everything within 150 metres that is visible from a public highway or an abortion premises. This means that someone on church property within this zone could be prohibited from displaying a pro-life poster, as that could be viewed as seeking to influence or interfere with access to abortion.

Freedom of expression requires letting people, with whom you may fundamentally disagree with, speak

In 2018, following a review on the necessity of further measures outside abortion clinics, the then Home Secretary, Sajid Javid, commented: “I have therefore reached the conclusion that introducing national buffer zones would not be a proportionate response, considering the experiences of the majority of hospitals and clinics, and considering that the majority of activities are more passive in nature.”

This government has also already acknowledged that the amendment is not compatible with the UK’s human rights obligations.

A few local councils have already passed measures similar to those included in the amendment, most recently in Bournemouth. Those individual ‘public spaces protection orders’ are concerning enough, but at least councils currently have to demonstrate the need for the order. This new law would take away any such protection and impose a deeply repressive erosion of freedom of expression without any need for justification.

Critics of even the most peaceful and unobtrusive activity outside of abortion clinics argue that it constitutes harassment of women who have already decided on a course of action. But where there is harassment, existing criminal law can, and should, be used to address problems. Where there is not, it is important to consider how free speech can be protected.

When the clause was debated in parliament, Stella Creasy MP insisted that this was about abortion, and not free speech, suggesting that people don’t pray or protest when someone attends a clinic for a hip operation or ankle injury. This betrayed more than I think she realised. Of course an abortion is different to a hip operation or an ankle injury. One is mending a human life, the other is taking it.

Critics of abortion protests should acknowledge that their moral framework cannot reconcile the importance that others place on human life before birth. Climate change activists often appeal to the importance of the issue they are addressing to justify their actions; similarly, it is important for those supporting abortion (and therefore opposing prayers and protests) to understand why so many strongly believe that abortion is wrong, and are therefore driven to help both pregnant mothers and unborn babies.

The government considered the vote on buffer zones as a conscience issue, meaning they did not instruct MPs on how to vote. This is normal for issues such as abortion and assisted dying, but this was a vote about freedom to speak, act and even pray in response to their deeply held beliefs. This was a vote against freedom of expression, directly in contradiction of the government’s 2019 manifesto pledge. When the House of Lords debate this measure in a few weeks’ time, the government should make clear that, in this new season, they will prioritise freedom of expression and commit to removing the amendment.