Think praying in public could never be banned in the UK? Bournemouth council wants to do just that 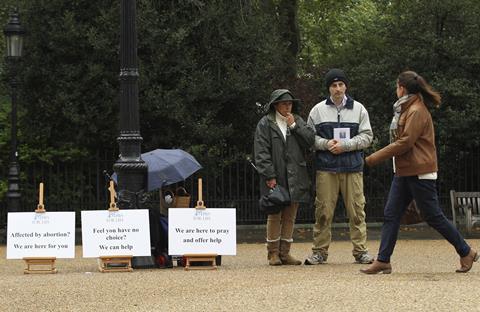 If you were told that an authority planned to ban events where “members audibly pray, recite scripture, genuflect, sprinkle holy water on the ground or cross themselves”, where would your mind go to? Communist China, perhaps? Saudi Arabia?

Shockingly, this quote does not come from some far away country where Christianity is banned but from a proposal made by Bournemouth, Christchurch and Poole (BCP) council.

BCP council wishes to bring in a Public Space Protection Order (PSPO) around the BPAS abortion facility on Ophir Road. They say that it is necessary to “protect the staff and visitors who have been affected by the behaviour of those who congregate, hold vigils and protest outside”.

Holding vigils outside abortion facilities is controversial, even among Christians. But it is indisputable that there are many people alive today because their mother was offered help, support or prayer outside one. The impression given by the media is that those attending a vigil scream at women and call them murderers. The reality is (usually) a few people quietly praying and/or offering leaflets.

If a council can decide that praying and reciting scripture can be banned in one place, they can do it in others

A recent tweet from Back-Off Scotland, a group that campaigns for buffer zones, shared a video with the caption: “This is what awaits you when you come out of an abortion appointment. And what you have to walk past if you’re a staff member.” It tells you to turn the sound on, as if you’re going to hear something very shocking. But when you play the video, you see four elderly people, quietly praying to St Michael the Archangel.

This is what awaits you when you come out of an abortion appointment. And what you have to walk past if you’re a staff member. And what you’re confronted with walking down the street if you’ve experienced baby loss.

While this might seem odd to those not familiar with that particular Catholic devotion, talking about having to walk past four senior citizens praying as if it’s some kind of terrifying ordeal seems a little far-fetched.

Leaving aside the misrepresentation, what is of most interest is the actual behaviour the council wants to restrict. “Intimidating or harassing…a service user or a member of staff” is fair enough. We can all agree these are unacceptable - but they are also already illegal.

The next is more worrying: “Protesting, namely engaging in an act of approval/disapproval…with respect to issues related to abortion services, by any means. This includes…graphic, verbal or written means, prayer or counselling.” The absurdity of banning approval or disapproval of abortion (or any other moral choice) has been pointed out many times. So a woman’s partner or mother can’t give any opinion? What about abortion staff?

But notice the specific reference to prayer and counselling. A few years ago, the narrative around vigils was that they were just about harassing women. No one would admit that pro-lifers genuinely wanted to offer help, or just quietly pray. Now this is fully acknowledged, but still BCP council wants to ban it. It seems that any level of opposition to abortion, even when there’s no intimidating behaviour, cannot be tolerated.

We need to recognise how momentous – and dangerous – this really is. In 2022 in the UK, a council wants to ban Christians praying in public, reciting scripture, crossing themselves, or offering help to pregnant women - even if they may actually want to receive it. It’s hard not to see an anti-Catholic prejudice of the kind that should have been left behind with the 1829 emancipation.

That prayer is now being considered inherently threatening shows that society is moving in a worrying direction. And this is why bans on prayer around abortion facilities should worry us all.

Whether or not you agree with pro-life vigils, if prayer is now seen as inherently threatening, it affects all Christians. If a council can decide that audibly praying and reciting scripture can be banned in one place, they can do it in others. Are religious processions next? Street missions?

We need to stand up for our rights to proclaim the word of God in the public square. And this right cannot be restricted to the bits of Christianity that society finds palatable. If our rights to freedom of religion do not extend to praying for some of the most vulnerable people in society – unborn babies and their mothers – then what good are they?

For residents of Bournemouth, SPUC has created a guide for responding to the Council’s consultation on the buffer zone. Email info@spuc.org.uk to request one.

Alithea WilliamsAlithea Williams has been heavily involved in the pro-life movement since her student days, and was a founding member of the Alliance of Pro-Life Students. She joined the Society for the Protection of Unborn Children (SPUC) as a communications officer in 2016, and is now combining her love of politics with pro-life work as campaigns and parliamentary research officer.