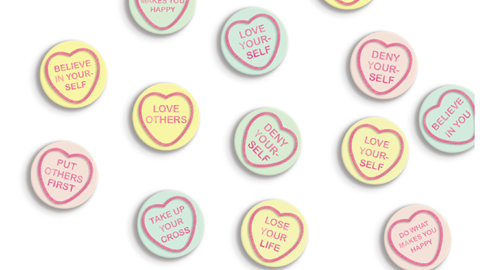 Why ‘being yourself’ is a bad idea

Following your heart won’t lead you to fulfilment, but denying yourself might, argues Bishop Graham Tomlin

For years I’ve wanted to write a book explaining to my friends who don’t have Christian faith why it makes sense to those of us who do. But where to start?

In the early years of the Church, being a follower of Christ was a dangerous thing. It could have got you killed, because it went against so many of the assumptions of the age. I want to rediscover this countercultural aspect of Christianity, not because I particularly want to be martyred, but because only by seeing it in this way can the Christian faith be revealed for what it is. I decided to begin with one of the most common bits of wisdom we tell each other these days.

You’re going for a job interview, nervously anticipating a first date or meeting someone you want to impress. You go to a friend to ask for advice and what are you likely to be told? There’s a fair chance you’ll get the advice I’ve been given on numerous occasions: “Just be yourself.”

It’s the staple of many a Disney film, trashy novel or TV advert – follow your heart, be true to who you are, be yourself. The ‘wellbeing’ or ‘spirituality’ sections of any local bookshop thrive on such a message, with titles such as Learning to Love Yourself, Believe in Yourself, Know Yourself or Respect Yourself.

Martin Luther had a characteristic way of describing the human condition. He said it consisted of “the heart curved in upon itself”. The image is of our hearts turned inwards in self-regard and self-consciousness, rather than turned outwards towards God, the source of life, and to our neighbours around us. It’s like a flower that instead of being stretched out towards the sun, shrinks away from the light and turns back towards the soil, shrivelling up, losing its colour and life, slowly dying a long, slow death.

This turning inwards is a picture many of us can recognise. Do you ever find yourself worried about what others think of you? Whether you have made the right choices in life? Anxious about how many followers, likes or retweets you get? Why other people seem to live so much more interesting or successful lives? Maybe those thoughts occupy a lot of your waking (and dreaming) time, and, when they rear their heads, chase any other more positive thoughts out of your mind.

The deeper problem is not just that we have a tendency towards this unhealthy introspection as individuals, but we have done it as an entire culture over the past few centuries.

A CULTURE OF SELF ABSORPTION

Charles Taylor, the Canadian philosopher, put his finger on the way we think about ourselves in the modern world and how that’s different from the way people thought in the past. He said that in past times, most people believed that they fitted into a large cosmic order, held together by God, or some kind of universal moral law (religions like Christianity, Judaism or Islam tend towards the former, others like Confucianism, Taoism or Buddhism the latter). The point about this wider structure was that we didn’t choose it, it was just given. To find wisdom or moral guidance, therefore, you looked outside yourself to God or the moral or natural law.

Over the past few centuries, many people in the West have abandoned faith in God, or any sense of a given cosmic order. As a result, there is no longer any overarching “sacred structure”, as Taylor calls it, which holds the world together. So we are left on our own as individuals in a world without any pre-determined architecture that tells us who we are and that gives us a sense of security and identity within a wider scheme of things.

Of course, we actually find it impossible to live in total chaos, with no structure whatsoever, so we have to manufacture it ourselves. Where do we look for moral guidance and direction? We look not to the heavens or the hills, but into our own hearts. We look inside. We look into our own inner emotions and desires.

In the 18th century, the idea began to grow that each of us has our own particular way of being human, our own individuality that sets us apart from everyone else. And so, to find moral direction, we search our inner selves, assuming that our true identities are hidden somewhere within, and the clues to that identity are found in our strongest and loudest desires and longings. The overriding moral law therefore becomes about being true to that self. We get the cult of authenticity, where the only true imperative is to be authentic, to “be yourself”.

This idea of being ‘true to myself’, or ‘finding myself’, as a plea for authenticity and the pathway to personal fulfilment was fuelled by the idea that if we were able to peel off every layer of expectation laid upon us by society, the artificial constructions of identity, gender, class and occupation, the irritating demands that others place upon us, we would find our true selves hidden within, like a cook preparing an artichoke, peeling away the rough leaves to find the hidden tender heart inside.

Yet, what if we are, in fact, more like onions than artichokes? What if, when we peel away the expectations of others, the roles we play in society, we get to the centre to find there is nothing there? What if there is no mysterious ‘self’ waiting to be discovered, no essence of ‘me’ that is stifled by the irritating other people who expect me to play roles prescribed for me?

An alternative and much more ancient view is that our selves are not so much discovered as created. Of course, we are born with a particular DNA, derived from our parents and ancestors. We are each created different and unique, with potential to do good and to do harm, and yet from that moment on, those inner selves get shaped and moulded by what happens to us and what we choose to do. They grow and develop, just as our bodies do. We shape our inner selves over our lifetimes by the choices we make, the commitments we enter into, the relationships we form, the habits we let take root, the way we react to what happens to us. A newborn baby has a ‘self’, but it is like putty – over a lifetime it gets squeezed and formed by what happens to her and what she chooses to do, and eventually often gets hardened into a fixed shape, sometimes good, sometimes not so good.

I may be alone in this, but whenever I’ve been told to “be myself” I’ve found it to be confusing and unsatisfying advice. When I meet someone new, the last thing I want them to know is the odd jumble of thoughts and feelings going on inside my mind and heart – the anxiety, jealousies, fears or frustrations that swirl around – and so I present a carefully sanitised and selective version of myself, designed to hide the bits I don’t want seen, and to present the parts I do. The person who says exactly what comes to mind, expressing themselves without reserve or any self-control will often end up hurting others and breaking confidences and relationships.

I expect that the most saintly and attractive people you have ever met were not consciously trying to be themselves – actually they were not thinking of themselves at all – they were more interested in you and what you had to say. In fact, our moments of greatest joy are usually those moments when we are hardly conscious of ourselves at all – those moments of sheer wonder, when we are transfixed by a spectacular view, a piece of music that seems just perfect, an example of astonishing sporting prowess or the delight in someone we have fallen in love with. In those moments we are caught up in fascination of something or someone outside ourselves, losing for a precious moment the crippling self-consciousness that so often cramps and diminishes us.

Jesus’ advice on the issue of ‘self’ is stark: “If any want to become my followers, let them deny themselves…” (Mark 8:34, NRSV, emphasis mine) What does he mean? Does he mean erasing ourselves, in a kind of masochistic self-abnegation? Becoming a doormat for others? This is an idea I think St Paul must have pondered, and he helpfully unpacks what Jesus might have meant.

In Paul’s writings, we often find the language of two selves – “your old self, corrupt and deluded by its lusts, and…the new self, created according to the likeness of God in true righteousness and holiness” (Ephesians 4:22-24, NRSV). He argues that the death and resurrection of Jesus have opened up the possibility of discovering our true selves. The self we have to deny and to discipline is that old corrupt and deluded self, the new self to emerge – the only one that will ultimately make us content – is the one we must nurture and encourage.

When Jesus was asked the question: “Which is the greatest commandment?” he did not say, as many modern lifestyle gurus would say: “Be yourself”. Rather, he quoted the Old Testament: “You shall love the Lord your God with all your heart, and with all your soul, and with all your mind… And a second is like it: ‘You shall love your neighbour as yourself’” (Matthew 22:37-39, NRSV). This, according to Jesus, is the secret of the good life – not learning to “be ourselves”.

The problem is that I can’t do this alone. I can’t turn my curved-in nature outwards any more than a flower, by sheer self-will, can turn itself upwards. Just as a flower has to be drawn upwards by the sun, the source of life and heat, so, too, I can only be turned outwards by something more powerful and compelling than the hurts and anxieties that constrict and constrain me. That is what we find in the grace of God, shown in the face of Jesus Christ. He enables this flowering of our true selves.

This is the invitation of Christian faith: the invitation to lose your crippling self-obsession and learn to love God and your neighbour – the person God has placed next to you, whoever they are – and to become truly happy in the process.