Friends: The lasting legacy of TV’s most popular sitcom

With just 10 days to go until the Friends reunion, Jamie Cutteridge considers how the show has connected with young and old alike, and what Christians can take away from it 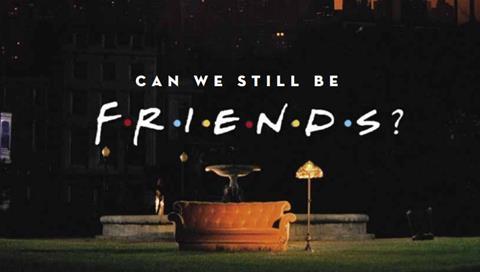 In hindsight, the theme tune could have been advertising a church, couldn’t it?

So no one told you life was gonna be this way
Your job’s a joke, you’re broke
Your love life’s DOA [Dead On Arrival]
It’s like you’re always stuck in second gear
When it hasn’t been your day,
your week, your month
Or even your year, but
I’ll be there for you
(When the rain starts to pour)
I’ll be there for you
(Like I’ve been there before)

Let’s hope this hasn’t given any ideas to an upcoming hipster church desperate for attention. But no, it wasn’t the song from the kind of church that changes its cringeworthy sign out front every week, it was of course, Friends (or, to give its proper title: F.R.I.E.N.D.S). One of the biggest sitcoms of all time, Friends is now 25 years old, and the highly anticipated reunion is just days away…

Originally broadcast on Channel 4 and E4 in the 1990s and early 2000s, Friends enjoyed a new lease of life after being added to Netflix in 2018. It has since become the most streamed show in the UK. That’s quite remarkable when you consider Netflix has spent millions producing and promoting brand new shows - yet none of them have matched the popularity of this decades-old sit-com.

The first episode of Friends is closer to the release of the Rubik’s cube than the last episode is to today. So, allow us a moment of nostalgia as we reflect on a quarter-century of the show, examine why it became so popular and consider what its lasting legacy might be.

Perhaps the enduring mystery of Friends is why it was as successful as it was. Predecessors and contemporaries such as Cheers, Frasier and Seinfeld were all more admired by critics, and equally popular with US audiences, yet aside from the omnipresence of Frasier on early morning Channel 4, no American sitcom before Friends, and very few after it, got close to the same traction in the UK.

Although the show was undoubtedly funny, a significant part of Friends’ charm and popularity came not from the jokes, but the characters. Phoebe, Ross, Monica, Rachel, Chandler and Joey were the real heartbeat of the show. It was, in essence, a glorified soap opera. The six month wait to find out what happened after Ross got Emily’s name wrong at the altar was utterly agonising.

Few TV shows appeal to multiple generations, but Friends did. The chances are you’ve probably had a Friends phase, whatever your age. Perhaps you watched it as an adult when it was first released to TV. Or maybe you got involved as a teenager when Ross and Rachel got married in Las Vegas in 1999, and now the teenagers in your youth group are discovering it on Netflix. Which is all well and good, but does bring us on to a predictable dilemma.

Unsurprisingly for a 25-year-old show, some elements of it haven’t aged particularly well. As our culture’s approach to gender and sexual ethics has shifted, some of the gags in Friends can appear unfashionable. Chandler’s comedic shame about his dad’s cross-dressing, or his fear about being mistaken as gay, and Ross’ assumption that a male nanny would be gay, all feel jarring in 2019 in a way that they didn’t in 1994. Similarly, the “fat shaming” of Monica’s past is a reliable source of comedy throughout the show, but doesn’t exactly fit into our healthier, body-positive approach to self-image. And some of the relationship dynamics at play are clearly pre #metoo: Rachel dates her intern, Ross goes out with a student (though this is at least treated as fairly iffy) and Monica has a long-term relationship with a much older man who knew her as a child. It’s also very white for a show set in a city as diverse as New York. There has been a backlash against some of these elements, spearheaded by young people discovering the show for the first time.

THE CHANCES ARE YOU’VE PROBABLY HAD A FRIENDS PHASE, WHATEVER YOUR AGE

The lazy, defensive approach to young people calling for boycotts of Friends is to claim that political correctness has, once again, “gone mad”. Some use unkind labels such as “snowflake generation” to write off the show’s young critics as overly sensitive. The more nuanced approach is to recognise that there are cringeworthy moments in Friends and that the sexual and gender politics will be jarring for many, but we should also understand that sitcoms provide a snapshot of their era. The greatest comedy show of all time (this isn’t up for debate), Fawlty Towers, is a prime example of this. At times, John Cleese’s masterpiece is perfectly written, and while the variety of jokes surrounding Spanish waiter Manuel come from communication problems, there is still an element of Manuel’s inherent ‘otherness’ being the focus of the joke. Similarly, the Major in the show, while meant to be laughed at, rather than with, for his old-fashioned, uncomfortable racism, uses words to describe Indians and West Indians that you simply wouldn’t hear on TV any more.

If you ever watched Friends to get good relationship advice, then you’re doing it wrong. But it’s certainly possible to enjoy the show without condoning all of its messages. In fact, in somewhat normalising the idea that a child could be brought up by gay parents, and by painting relationships that put men and women on a mainly equal footing (as long as you view Joey’s approach to relationships as the prime example of how not to do it, rather than something to aspire to), it at least began to paint a somewhat progressive, 21st Century approach to love and loss. However, this is not an opportunity for those of us who are younger to use Friends as some sort of learning exercise to show older generations how they’re wrong and outdated. Instead, this could be an opportunity for both generations to listen to each other. Older people can hear why certain jokes and ideas are no longer acceptable, while young people can see through Friends that their parents, grandparents and church leaders, who may, on first glance, appear outdated, are simply, like all of us, products of their time.

There is a benign godlessness to Friends. We wouldn’t expect any heavy theological expositions in a sitcom, but there’s a complete absence of almost any religious engagement outside of the cultural Jewishness of the Geller family (let’s face it, for many of us, everything we learned about Hanukkah, we learned from The Holiday Armadillo). Even the Gellers’ apparent religion seems to come and go according to when it’s useful for the plot. Perhaps that is a reflection of the postmodern view of faith – it’s a useful tool when we need it, but it’s pretty disposable and ignorable the rest of the time.

THE SHOW MODELLED HOW TO NAVIGATE FRIENDSHIPS WHEN TIMES WERE TOUGH

What is perhaps more interesting is how little the show had to say about…anything. Other than the intricacies of the characters’ lives and relationships, it wasn’t really about anything. It didn’t paint a vivid picture of late 20th Century life. It was overwhelmingly safe, desperate to please everyone, no matter your race, sexuality or religion. That might go some way to explaining its popularity.

Ultimately Friends was about exactly what it says on the tin: friendship. Relationships that stick by you through three failed marriages, seven babies, a trip abroad, two successful marriages, a few deaths of peripheral characters and the crushing inevitability of it not being your day, your week, your month, or even your year. It’s a show about those kind of friendships. A programme that reminds us that real friendships can survive break-ups, and cheating with your friend’s girlfriend, and more break-ups, and bad spray tans, and weird artwork, your mate’s awful singing, and shaving a woman’s head to get back at your ex, and irrational jealousy, and your younger sister being given the Porsche, and disastrous thanksgiving meals, and bad teenage haircuts, and leather trousers, and not knowing what one of your best friends does for a living.

At its best, the show modelled how to navigate friendships when times were tough. When forgiveness was needed. When stuff was broken. And in those moments, we saw glimpses of Christ, fragments of religion beyond holiday armadillos. We saw relationships worth fighting for, ones worth giving up status and taking on humility for. We saw restoration in the face of hurt. We saw a God who sticks by us no matter what. And perhaps, in the midst of our world of pain, we saw a man hanging on a cross whose core message is: I’ll be there for you.

Jamie CutteridgeJamie Cutteridge is the director of With, a new Christian community and retreat centre dedicated to praying for and with young people bewith.community