It was one of those evenings on the internet where everyone is talking about the same thing. Sometimes it’s wild rumours about a former prime minister. Other times it’s arguing over the colour of a dress. If you can’t imagine what that’s like, just remember the weekend of the Dominic Cummings furore. Whether we were simply seeing the story unfold, were stunned/delighted by the government continuing to defend him, or waiting for him to turn up to his own press conference, it was the only thing anyone was talking about, much to the detriment of those of us who wanted to enjoy the bank holiday sun but are addicted to the internet. Every opinion shared was jumped on, every view was argued against. We’ve all seen days like it.

But the story I want to share is different. This time it was a more sombre jamboree, if such a melancholy soiree could ever exist. It was the day one of the most successful basketball players in the world died. The sports corner of the internet was a sad place, as favourite moments of Kobe Bryant’s career were shared. And, because this is the internet, despair soon turned to rage.

Less than two hours after the story broke, the BBC News at Ten reported on the story. And somehow, disastrously, some of its package included footage of LeBron James, a different basketball player who crucially had not died that day. To compound the idiocy, the videos of James were of him playing and, as those of you who have ever glanced at a moment of sport will know, he had his name on the back of his shirt. It was a bad error at a bad time. Two men confused – critically, two black men confused – in a majority white country. It was bad.

we know what happens next. The clip gets posted to Twitter. People get angry. People get angry about anger. The spiral continues. Some people suggest that the BBC is intrinsically racist. Others say it needs more diversity in its workforce to avoid these mistakes. Others point out that the mistake could have happened to and about anyone, but, as many highlight, it didn’t happen about anyone, it happened about a black man who was confused with another black man.

But before those debates really got started, I did something silly. I got involved.

Here’s a bit of context: Kobe Bryant was one of the best basketball players of all time. Until recently he was third in the rankings of top-scoring NBA players. In fact, it was only the night before he died in late January that Kobe was overtaken in that list by, you guessed it, LeBron James. And so the footage the BBC showed was actually the footage of LeBron overtaking Kobe. Footage that would have been tagged ‘Kobe Bryant’ as well as ‘LeBron James’ in the media folder. That is, almost certainly, how the mistake happened. It still took a whole heap of other mistakes, such as not knowing what Kobe looked like, not checking, not seeing the name on the shirt, but it’s safe to say the researcher didn’t search for “black basketball player” in the BBC archive and think “that’ll do”. And no, that doesn’t make it OK; ignorance that exists must be challenged. 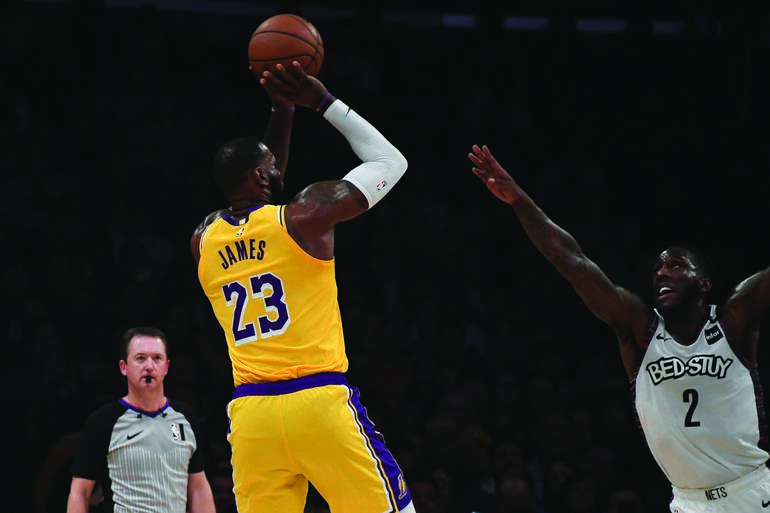 We don’t know who made the mistake. And not just the initial mistake. We don’t know whose and how many eyes the clip passed before it made its way onto BBC One. So the internet’s ire was pointed at no one in particular. Until I stepped in.

My tweet began: “Obviously this is really bad...” I hoped this would be enough, but I was undone by my next word: “...but...” I then explained the above Kobe/LeBron context, assuming that many of those angry tweeters wouldn’t have known about the previous night’s events. This was a mistake. But a mistake that, ultimately, I stand by. I haven’t deleted the tweet. I don’t think I was wrong. It was perhaps a “wrong place, wrong time” scenario. As more and more people saw the video, my reply seemed to be the only one coming close to defending it (I wasn’t defending it) and as such I became a fortuitous target for those looking to direct their anger at someone. And the more replies tweets get, the more people see it...and so on...and so on...Suddenly my Twitter was basically unusable for 48 hours, because I was receiving so many angry messages. My tweet appeared in close to a million timelines. I became the viral sensation that we all dream of being, for the reasons we all fear.

Why do I share this self-involved story? Well, believe it or not, it isn’t just so you can see how edgy I am. Nor, very importantly, is this an elongated attempt to defend myself for the BBC. The thing is, I’ve learned something really valuable from this experience. Pile-ons happen all the time on the internet. Every day someone is jumped on because they made a mistake, used an outdated term or was downright offensive. And look, I’ve been part of those pile-ons. They’re fun. It’s nice to feel right, to show others how morally correct you are in your language and understanding.

This isn’t something specific to ‘woke’ Twitter either. In fact, you too can create your own personal internet pile-on: simply choose your social media network of choice (this happens as much on Facebook as it does Twitter, and oddly manages to happen on the image-centric Instagram as well), and combine it with some of your core opinions. Boom, you have asocial media storm.

This isn’t something only happening ‘out there’, in the world, either; Christians are just as prone to jumping on someone they disagree with on social media as anyone else. And similarly, this isn’t just a liberal-on-conservative crime; this is happening both ways. Sometimes it transcends typical camps, and the political becomes personal, as we saw in the tragic story of Caroline Flack, the TV presenter who killed herself after receiving abuse by the media and general public over allegedly attacking her boyfriend.

Here’s the thing: one of the reasons I’ve reflected on my experience in the way I have, is because for years I loved a pile-on. The smug sense of satisfaction when you post the message. The rush of endorphins whenever anyone likes your comment. I’ve been guilty of getting stuck in on the internet’s bête noire of the day. And I’ve enjoyed it. Everyone enjoys it. But look, if you spend enough days being the greyhound, eventually you become the rabbit

There are certain things that we blame on the internet that were always there in society: our narcissism, our obsession with sex, our individual isolation. They existed before the internet, they just look different in our hyper-connected culture. But the mass ‘pile-on’ seems an inherently digital phenomenon. Maybe it’s the dehumanising effect of usernames and avatars. Maybe it just looks like fun to get involved in.

But I wonder if it’s actually less connected to the internet and more reflective of a similarly modern phenomenon; that everyone feels like they’re ‘losing’. In the world of politics, those on the left feel like they’re losing because...well, they are. Recent elections in the UK and US have both been won by right-leaning parties and, to make a generalisation, Brexit was more popular with those on the right. At the same time, those on the right fear they’re losing the ‘culture war’, as society as a whole is seen to be becoming more liberal. In the Christian world, it’s similar: Christians with more ‘progressive’ views feel ignored by mainstream churchmanship, while those holding more ‘traditional’ beliefs see the ‘inevitable’ slide towards liberalism happening before their very eyes. And all of us, no matter what we believe, or do, or act, or say, or are kept awake by at night, feel powerless to change the ongoing series of defeats inflicted on us.

So in a world where we consistently ‘lose’, taking part in these pile-ons is perhaps less about being right, and more about winning, getting one over on the bleeding heart lefties/dead behind the eyes Tories/woolly liberals/living in the past conservatives (delete as appropriate). I wonder if this is actually telling us something far deeper, then, something about the way we view our adversaries? Did you notice the word I used there? Adversaries – opponents, enemies. That’s the way we talk about them nowadays. Those we disagree with are not just people we differ from; they’re rivals to be beaten, foes to be smote, antagonists to be overcome.

I’ve been really struck recently by the reading of the Good Samaritan in Rev Dr Samuel Wells’ excellent book A Nazareth Manifesto (Wiley-Blackwell). In this understanding of the story, we find ourselves as the injured man on the side of the road, rather than the person walking past. And as we sit in that position, the question we ask ourselves is not whether we have the ability to help those we might consider in need, but instead our willingness to accept help and love from those we think ourselves better than. Are we willing to learn, genuinely learn, from those on the other side of the divide? To do that we suddenly have to appreciate the humanity of those we want to pile on, and then to stop and listen, rather than shut them down. So often, the invitation of Jesus is to humble ourselves, to the point of embarrassment. The internet is the opposite of this. It’s about being right and winning, about showing others how brilliant and correct we are.

The message here isn’t that there are certain opinions one cannot hold any more. The nature of the internet means that there will always be someone who agrees with you, and someone who thinks you need to be ‘cancelled’. How much flak you receive is, in some ways, less to do with what you say and more to do with which frenetic corner of the web your views end up in.

If there’s something else we see in the life of Jesus, it’s the importance of speaking truth, even when it’s unpopular, even when it gets you killed. But there’s nothing exclusively Christian about speaking truth; the whole internet is full of people telling you how much truth they’re speaking. Instead, perhaps lets focus on some of Jesus’ other teaching: treat other people’s idiotic comments in the same way you’d want your idiotic comments to be treated.