‘I’m transgender and I love Jesus’

Chrissie Chevasutt battled gender dysphoria for decades. They explain how a dramatic encounter with the Holy Spirit during a transgender dressing appointment changed everything

For most of their life Chrissie, 62, told a story. It was a moving testimony of God’s grace and power that was often shared in front of thousands of other Christians.

Growing up, Chrissie’s home environment was broken. Eventually, they ran away to London, where they battled drug and alcohol addiction, and teetered on the brink of prostitution. This self-confessed “God-hating alpha male” was part of a “very anarchist and rebellious rock ‘n’ roll culture”. In the midst of severe depression, Chrissie moved to India to seek spiritual enlightenment, but, finding themselves homeless and addicted to opium on the streets of Delhi, they railed at God. “I started to curse the name of Jesus.” 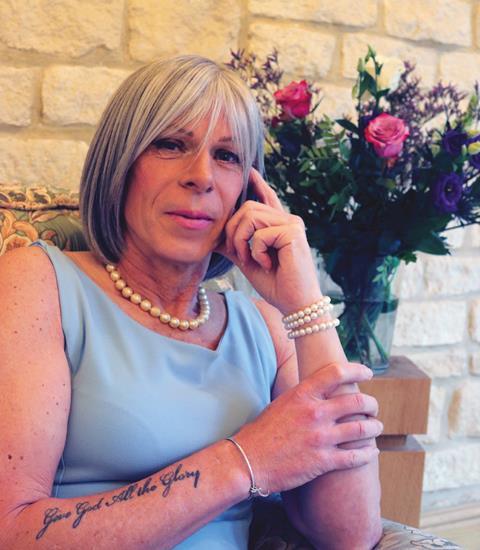 What happened next was lifechanging. A revelation that Jesus was “good, innocent, but we’d crucified him” came over Chrissie as they lay by the side of the road. “It was very profound. And in that moment, I looked at my own life and I saw how evil I had become. I’d given drugs to kids, I’d been abusive in all my relationships. And I just wept. I felt God say: ‘Go home. Love your family. Love everybody that I put in your path because you’ve never loved anybody before. You’ve never even loved yourself.’”

Back in the UK, Chrissie suffered agoraphobia and drug withdrawal. As they read the Gospel of John, they again became captivated by the person of Jesus – even in the midst of physical and mental breakdown. This culminated in a visit from a local vicar, who suggested an exorcism. “I consented, and that was my birth into the kingdom, I suppose,” Chrissie remembers.

Church was an alien environment, yet God was at work. “When the minister preached, the love of God fell on me and broke me to such an extent that I found myself weeping. This love was filling me, overwhelming me, washing me. And this happened week after week.”

After that came marriage, children, involvement in Youth With A Mission (YWAM) and leadership responsibilities within the Church.

This was the testimony that Chrissie shared regularly. But it was incomplete. It turns out, there was more to the story.

Chrissie had experienced gender dysphoria since they were five years old. Self-hatred of their male body, feelings of shame and unworthiness, and resulting struggles with addiction “to escape myself” persisted through adolescence and adulthood, and even continued after their conversion to Christianity. These secret struggles led to confusion, pain and suicidal thoughts. “I hated myself for being different,” says Chrissie.

There were occasions when Chrissie confessed the truth to trusted Christian friends. Each time, confession was followed by rejection. Chrissie was told that their tendency towards femininity must be crucified and put to death, as it was part of their sinful nature. So Chrissie “suppressed and repressed” all of their feminine instincts and instead developed a “toxic male persona”. “I was very aggressive,” they remember. “It was really a performative masculinity.”

After decades of feeling “detestable to God” but unable to change, Chrissie was driven to despair. This was compounded by familial, societal and church rejection, not to mention negative media portrayals of trans people. “We were always vilified, demonised, ridiculed.”

“I longed to transition,” Chrissie tells me. “But I was 55 and muscled, with skin like a crocodile. Physically, I don’t for a minute believe that I look feminine. I was grieving and I thought: When I’m an old man, I want some photos to cherish of who I could have been, and who I believed I always was.

Chrissie booked a transgender dressing service, in order to have some photos taken. They thought it would be a once-only opportunity. “This transgender life coach had done my makeup and hair. I stood in front of the mirror and looked at myself. And the love of God swept through me. I crumpled to the floor. I went to that dressing service feeling like Jonah in the belly of the whale, feeling that I’d run away from God and I deserved his judgement. Instead I felt the Holy Spirit say: ‘Chrissie, I love you just as you are.’ I just wept. I felt the Holy Spirit say: ‘Today, I’m setting you free from the shame, self-hatred, guilt and suicidal ideation.’ And in the seven years since, I haven’t suffered a single stroke of suicidal ideation, shame, self-hatred or guilt. That’s my Jesus. That’s what Jesus does.””

I THOUGHT I WAS DISPLEASING GOD AND I DESERVED HIS JUDGEMENT. INSTEAD I ENCOUNTERED HIS LOVE

A combination of that moment in the dressing room plus their own biblical study has convinced Chrissie to finally embrace their femininity and live as a trans woman. As they write in their autobiography, Heaven Come Down: “If there was a healing God needed to do, it wasn’t in delivering me from a feminine identity; the healing was in the restoring of it.”

“I didn’t read anybody’s theology, because my nature is just to go to scripture for myself,” Chrissie explains. “I researched the word ‘eunuch’. And the Holy Spirit led me on this journey, of seeing eunuchs as people excluded, damned and judged by law from the fellowship of God’s people, to Isaiah 56, where it says: “to those eunuchs…I will give them a name in my temple, greater than that of male and female.” God is exalting them. That is mind-blowing acceptance. But when you get to Jesus’ teaching, it’s even more mind-blowing. He exalts them as an example of kingdom living. The eunuch would be a broken, non-binary character and Jesus includes them. And then you go to the book of Acts and there’s the inclusion of the Ethiopian eunuch too.”

Chrissie feared that coming out would end their marriage of more than 20 years.

When Pam first read the letter from her husband, which revealed the full story, it came with a crushing weight. “I had absolutely no idea what I was taking in,” Pam writes, remembering the moment the couple sat together on the sofa, weeping. “… but in that moment my priority was to affirm Paul. Whatever this meant, we would face it together.”

Both Chrissie and Pam admit there was a grieving process, but somehow the couple have been able to weather the storm.

“Physically, the rules of marriage have changed,” Chrissie says. “Pam is not a liberal lesbian. She’s heterosexual. So all of a sudden, she’s got a feminine husband. It’s a huge shock. But I would say God is redeeming that and actually, our friendship is stronger, our love for each other is stronger. We’re laying down our lives for each other. Our family life has actually got real for the first time in our Christian experience, because I’m no longer pretending.

“But as I have stepped out of a lifetime of shame, Pam has stepped under shame. She’s felt the judgement of Christians no longer speaking to her. Ignored by her friends that she prayed with a couple of times a week, who no longer contact her.”

Having embraced their femininity, Chrissie now has a deeper understanding of their earlier addictions. “It was basically selfdestruction,” they say, “and, underneath it all, the reason for that was the hatred of myself for being feminine.”

For most of their Christian life, Chrissie accepted the Church’s traditional perspective on gender and lived as a man. Having now decided to live as Chrissie, there’s a lot of rethinking to do. “I can’t label myself except that I know I’m in a process of deepening my relationship with God. The naive belief in religious fundamentalism that I had when I entered the Church no longer holds intellectual integrity.”

To those who disagree with Chrissie’s newfound theology on gender, they reply simply: “If the fruit of me being transgender is a deeper love for Jesus, and a deeper love for scripture, then that’s got to be a good thing. I think everyone would admit that.”

Since coming out as trans, Chrissie says they have experienced “abundant and overwhelming joy”.

“Talk to my wife, talk to my friends and they will vouch for that. My character and my personality have been liberated.” 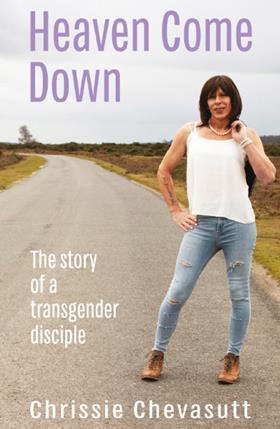 Agreement is hard to come by when it comes to the conversation around transgender issues. But the pattern of rejection Chrissie has experienced from fellow Christians should give us pause. There are questions that require an answer, not least: When we say “everyone is welcome” in our churches, do we mean it? Are we willing to look again at scripture’s teaching on gender, or are we fearful of what we might find? And perhaps, most pertinently of all, how can Christian communities best reach out with the love of Christ to the hundreds of young people whose gender dysphoria is driving them to despair?

Heaven Come Down by Chrissie Chevasutt (Darton, Longman & Todd) is out now