Speaking up on sex and gender is terrifying, but as a Christian and a woman, I can no longer keep quiet

For too long, the Church has watched in silence as high-profile women standing up for sex-based rights have been subjected to vilification by a powerful trans lobby. The fear is real, says Emma Fowle, but we must speak up 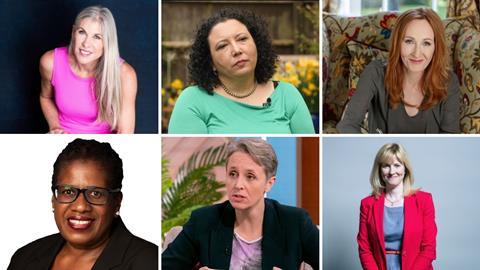 Growing up, Sharron Davies was my hero. As I spent my teenage years training to be a competitive swimmer, Davies was enjoying a comeback, returning to the sport from which she briefly retired in 1980 and winning a raft of British, European and Olympic medals. I gave up on my own Olympic dreams a few years later, but fast-forward a few decades and Davies is still a hero in my eyes.

In 1998, Petra Schneider, the swimmer who beat Davies to Olympic gold in 1980, admitted to doping – one of many athletes caught up in an endemic, state-sponsored program that would see East Germany win 90 per cent of the swimming medals that year. The unfair advantage that steroids gave Schenider still smarts, Davies says, and is one of the reasons she continues to stick her neck out for fairness in sport today.

Last weekend, FINA, the world governing body for swimming, voted not to allow transgender women to compete in female-only categories. In an interview with The Times following the decision, Davies described the East German doping regime that robbed her of gold as the equivalent of “putting girls through male puberty”. Forcing natal women to compete with transgender athletes creates, she said, a playing field in which females are forced to “accept a disadvantage before they start to race.”

Davies has long been a vocal critic of allowing trans women to compete in female sports. But, like many women who advocate publically for the protection of their sex-based rights, it has not been without huge personal cost. High-profile figures like author JK Rowling, gay barrister Allison Bailey, Professor Kathleen Stock and MP Rosie Duffield have between them received death threats, lost jobs, had the physical safety of their family threatened and received an onslaught of online and physical abuse. All from people who, ironically, accuse them of being illiberal.

But while Davies says that speaking up has, at times “made my life hell,” she would not have been able to live with herself “if I did not stand up and voice my opinion.” And that got me thinking. In her column for The Sunday Telegraph this weekend, journalist Nikki da Costa thanked Rowling et al. for speaking up on behalf of the silent majority of women – many of whom are, frankly, terrified of getting involved in what Davies describes as a “toxic debate”. And I am one of them. As a journalist and a Christian, you would think that I would be used to going against the tide of current cultural norms. Those who know me would probably say that I love a good heated debate, and definitely do not mind a healthy disagreement.

But somehow, stepping into this territory seems particularly unnerving. I discussed this piece first with my husband and then my wider team - something I would never normally do - supremely aware of the storm I could be walking into and the long term repercussions it could have. That in itself should be a red flag to all of us who value the freedom of expression that living in a healthy democracy should afford.

So many women, of differing faiths and none, have already been willing to stand up and count the (extremely high) cost of speaking up for what they believe in. It’s a concept that no Christian is a stranger to. In Matthew 10:22, Jesus warns his disciples that they will be “hated by everyone” for following him. Nonetheless, we are asked to take up our cross, even if it costs us our lives (Matthew 16:24-25). The issue of gender and sexuality is one that is central to many traditional, Bible-believing Christians (as well as many other faiths). But because of the heat of the debate, the complexities involved in communicating well - with compassion and love - and the very real risk of reputational loss, criticism and even physical violence, it is also one that many of us choose not to engage with. Heck, even most Christian leaders would prefer not to get involved.

Some have said that the tide is beginning to turn in the trans debate, as demonstrated by FINA’s decision, Maya Forstater’s recent court victory, various government departments quitting Stonewall’s controversial diversity scheme and continuing controversies surrounding the Tavistock Clinic, home to the UK’s only Gender Identity Development Service (GIDS). But there is still much to be fought for and, as a Christian and a woman, I, also, can no longer keep quiet.

To paraphrase the famous quote attributed to Edmund Burke, all it takes for a (very loud) minority to overrule a majority is for fear to silence them all. In the argument surrounding trans women and sport, I welcome FINA’s ruling, and pray other sporting bodies follow suit. Expecting women to compete against people born male, whose bodies are fundamentally, biologically different in a way that brings measurable advantage is unfair. Justice is a key, biblical concept, as is the concept of immutable truth. When judges and politicians become too scared to even define the word “woman” it puts Christians, who believe that men and women are created in God’s image – and therefore that biological, birth sex is a real, unchangeable thing – in an increasingly difficult position.

In the area of single-sex changing spaces, prisons and refuges, the agenda of self-identification must be challenged. Asking women to wholesale share these safe spaces with people who still have a penis is not OK, especially when research shows there is a credible risk that needs further discussion. According to evidence submitted to the government’s Women’s and Equalities Committee, 58.9 per cent of trans women in prison had been convicted of a sex offence, compared to just 3.3 per cent of women, and 16.6 per cent of men. Can it ever be right to move a person born male, who has committed violent, sexual crime against women, into a female prison? Yet that is exactly what happens. Under current UK prison policy, offending history and anatomy are considered irrelevant; a male prisoner who identifies as transgender and who has a Gender Recognition Certificate, must be allocated to the female estate, despite the risk to the women there. The Bible tells us to “defend the weak” (Psalm 82:3) and speak up for those who have no voice (Proverbs 31:8). Now, more than ever, women need the Christian community to use theirs.

I demand the right to be able to express my own view, based on Biblical principles, without fear of intimidation or threat

Am I bothered that the NHS has removed references to “woman” and “female” from its webpages on ovarian and womb cancer but not “man” and “male” from pages on testicular cancer? Yes, I am. Should we be allowed to graciously, considerately and compassionately disagree on whether you can ever totally ‘change’ sex? Yes. Because if you can’t do so without being threatened with physical violence, sacked from your job or hounded out of the educational establishment where you’ve worked for over 20 years (see Professor Kathleen Stock and University of Sussex), I’d argue that accusations of transphobic views are the least of our problems.

The right to freedom of expression, religion and belief are critical to the underpinning of what we know and enjoy as a tolerant, safe society. And that itself is underpinned by ancient Christian values. It should be perfectly possible, as the recent survey from More in Common reported, to “balance the experience of a small minority – who often go through real hardship and want to live their lives freely – with those who are concerned that these changes do not, inadvertently or otherwise, undermine sex and gender-based rights or women’s safety.”

Those concerns are not coming from a fringe minority of hard-right religious nut jobs either. Only 24 per cent of people surveyed thought someone who still had a penis should be allowed to use female-only changing spaces. A majority believe medical transition should only be available to those over 18. And just 19 per cent think transwomen should be allowed to compete alongside female athletes. But most are publically silent on the matter, fearing retribution from hardliners intent on intimidation.

At a recent event in Bristol, women’s rights group Standing for Women claims it was harassed, intimidated and threatened by Trans activists dressed in black tracksuits, balaclavas and masks. The afternoon ended with women being locked in a pub for their own protection, police standing guard outside. This behaviour – often from men or those born male – does nothing to alleviate the fears of women who have been fighting against male violence, domination and oppression since the dawn of time.

As a Christian, I have no expectation that anyone who does not believe what I believe will – or even should – live according to my values. I believe in a society where those who identify as transgender can live without fear or intimidation. I have great empathy and compassion for those who experience gender dysphoria. But also as a Christian, and a woman, I demand the right to be able to express my own view, based on Biblical principles, without fear of intimidation or threat. I demand the right to discussion, debate and sensible consideration of policy that protects the interests of the many and not just the few. I will no longer be counted among the number too scared to use their voice. I’m taking up my cross. Whatever the cost.