Hatun Tash: The radical Christian who was stabbed after criticising Islam

The Christian apologist Hatun Tash was stabbed at Speaker’s Corner yesterday. Tash is a former Muslim and an outspoken critic of Islam. In the following column, originally published in February, Sarah Lumgair explains how Hatun’s life has been threatened on numerous occasions 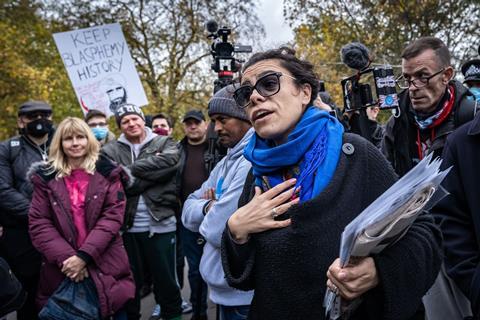 With a heavy sigh, Hatun closed the laptop and followed her landlord downstairs to meet the police officers. The date was Monday 2 November 2020, and it was the sixth police visit to the house in as many days.

Sitting down, Hatun quietly listened to the now familiar notice, known as an Osman warning, which is issued by police to the potential victim of a death threat: “The police are aware that you continue to attend Speaker’s Corner to express your religious views. By doing this, you are putting yourself at significant risk of harm from others. The police advise you to stop attending Speaker’s Corner, and/or expressing any views of this nature…”

From Hatun’s perspective, this was business as usual; the police had become regular visitors. But on returning to the kitchen, Hatun was confronted by a look of utter terror on her landlady’s face. It wasn’t just Hatun who had been given an Osman warning; every member of the household was now deemed at risk.

I struggle to convey the strength of emotion that gripped Hatun in that moment. Since she’d converted from Islam to Christianity, Hatan’s biological family had severed all ties. Now, this family had become her family, and knowing that she had put them at risk broke her heart. That week, she boxed up her belongings and left home, again.

Today at Speaker’s Corner, debates and discussions between members of different faiths are often filmed and uploaded to social media, drawing a global audience.

It was at the Corner, in the summer of 2016, when Hatun and others held up 26 different Arabic Korans, thereby debunking the Muslim claim that not one letter has ever changed in the Islamic holy book.

After initial denials, Muslim leaders strategically opted not to engage with her, meaning there was little debate that could be filmed and published on YouTube. A breakthrough came four years later when the Islamic scholar, Yasir Qadhi, was interviewed by a Muslim apologist. Qadhi stated: “It’s very clear…that the standard narrative [about how the Koran was compiled] has holes in it.” When asked whether he could confirm the words of the Koran as given to Mohammad, he said he could not. The backlash was immediate and “holes in the narrative” became the catchphrase for many people questioning Islam.

But the problem was one of publicity. That interview was removed from Muslim channels to limit its spread. Hatun felt strongly that Muslims were being prevented from hearing truth.

Here you may question her sanity: Hatun took an ornate Koran and drilled holes in it. Of course, many Muslims who saw or heard of the ‘holey’ Koran were outraged. Verbal and even physical attacks followed. But her unusual methods worked, and soon she was receiving messages from all over the world asking about her actions. This gave her the opportunity to explain the problems with Koranic preservation and share the gospel. Many have since come to faith as a result.

When I asked Hatun why she did something she knew would put her life at risk, she replied: “It wasn’t convenient for Jesus to enter this world, but he was willing to be mocked and even killed to bring us truth, so I can’t pull back.”

Hatun’s methods may be unorthodox, but I am inspired by her example of counting the cost and doing whatever it takes to share the gospel.

Sarah LumgairSarah Lumgair is the chair of Rooted (rooted-online.org), which addresses the arguments against Christianity that are increasingly heard on urban streets