‘I was a Muslim consumed by hatred. But now I serve Jesus in Afghanistan’

One year on from the Allied’s withdrawal from Afghanistan, one man tells his remarkable story of finding Jesus among the pain of war, and how he is sharing the hope of Christ with his fellow countrymen 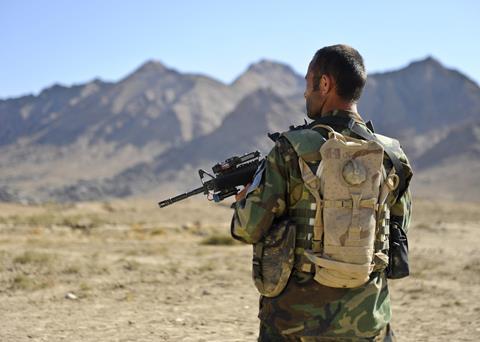 Perhaps many people will ask, ‘How is it possible for an Afghan man to become a Christian?’

I was raised a Muslim and always had God on my mind. I prayed five times a day and read the Quran. I wanted to know God and I wanted to know the truth, but I never found peace and tranquillity.

During the civil war in Afghanistan (1996-2001) I decided to join the army. I wanted to fight Daesh, the Taliban, or anyone really. To be honest, I didn’t know who I wanted to fight or who I would be fighting. But it didn’t work out. God didn’t want me to kill anyone.

Then I lost my sister. She was killed tragically when she was set on fire, and this completely broke me. I wanted to find the person responsible for her murder, and I wanted to kill them.

Vengeance runs in the blood of Afghans. We are driven to get justice by any means. My only sister was taken away from me, so I wanted to avenge her, even if it meant I would lose my life in the process. Life was full of trouble, and thoughts of revenge were always on my mind.

I left Afghanistan, but my torment followed me. During some of my most difficult days, a very dear friend approached me when he saw me weeping and mourning. He said, ‘I can’t do anything for you except for one thing. I have a Gospel which I can give to you. Read it. Really read it.’

I took the Bible, but left it sitting in a corner for two weeks as I went back to work and continued crying day and night.

Finally, I decided to open the Gospel and began to read. Words and sentences began to jump out at me, like ‘Forgive, that you may be forgiven,’ and ‘God so loved the world that he gave his only Son for you.’ These verses touched my heart.

I was able to contact a pastor and speak to him. He listened to my troubles. I told him: ‘I want to understand what I read about forgiving that I might be forgiven. The Bible said I should forgive my enemies too. What is that all about?’

The pastor said to me: ‘Do you know that while you were a sinner, Jesus gave his life for you so that you would have life?’ This left me speechless. I decided to join a church, where I saw people worshipping God freely. I sensed peace as I listened to the messages and finally began to smile and laugh.

When I realised I was smiling, I asked the pastor a simple question: ‘Can I become one of you?’ The pastor replied: ‘You just need to put your faith in Jesus, pray for salvation, and give your heart to Christ. Then you will find peace. The Spirit of the Lord will live in you.’

Then and there I prayed, and I was smiling all the way home. That was the first night that I had peace as I went to sleep. The next day I woke up with a sense of wellbeing and joyfully called my family.

I told my family that I forgave the person who killed my sister. They asked me: ‘How?’, and I told them about Jesus and how he said that we must forgive our enemies. No one could believe what I was saying. The person they knew, who was bent on vengeance and revenge, was transformed to such a degree that even I was surprised.

The peace of the Lord poured into me and put out the fire that had been burning inside. I could no longer dwell on vengeance. Sorrow and grief had no place in me – they disappeared and became distant memories.

When I became a Christian, many who were dear to me shunned me, but my thoughts were: Even if the whole world shuns me, I will not be upset, for I have found something of far greater value. I have come to know the truth and have seen what Jesus has done in my life.

I received a lot of teaching and loved worshipping the Lord. Every service felt like a wedding celebration, and I was filled with enthusiasm. One day, the pastor asked me if I had a vision to serve the people of Afghanistan, and I responded: ‘Of course! I have been saved and I would like to help save others.’

My only sister was taken away from me, so I wanted to avenge her, even if it meant I would lose my life

I decided to go into ministry, and I thank God that I am serving now. My hope is that the transformation that has come about in me and the peace that I have been given by the grace of Jesus Christ can be extended to the people of Afghanistan.

The current situation in our country is very difficult. Our message is that Afghan Christians are standing with you and praying that the Lord will give you comfort and peace. We know these are difficult days and you have lost your loved ones, and we want to stand with you and pray for you.

Soroush (name has been changed) was sharing his story with SAT-7’s Persian language programme Signal. Broadcasting since 1996, SAT-7 is run by and for the Christians of the Middle East and North Africa and broadcasts in Arabic, Persian and Turkish. Learn more at sat7uk.org