The Split: There isn’t much sex in the BBC show, but that doesn’t make it good Christian viewing

Don’t be fooled by the lack of explicit content, says Rosie Ruth, there’s plenty for Christians to get hot under the collar about. As the latest series of The Split concludes, the show’s insidious storylines are a sombre reflection of society’s attitudes to marriage and infidelity 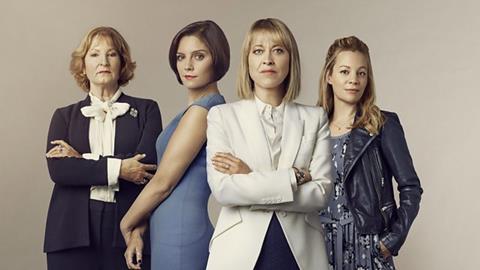 As Christians, we can think we know what to avoid on TV. Sex, violence and bad language are, of course, the obvious indicators. But we also need to remember that even without these, a programme isn’t automatically healthy viewing. If we want to avoid being “conformed to this world” and able to “discern what is the will of God” (Romans 12:2, ESV), we also need to be aware of the underlying messages that a programme communicates. These may not always be reflected in the surface content, but in the storyline and ultimate direction of the narrative.

Season three of the BBC hit TV drama, The Split, finished on Sunday. Aimed at an adult audience but without any graphic or clearly offensive scenes, it’s the kind of drama very much associated with traditional broadcasting in the UK; the sort of programme we’ve all viewed at some time or another.

The show centres on three sisters, their mother and the law firm they run together, which specialises in divorce. The storyline is used to regularly defend their work: they’re not about exploitation or making piles of cash from failed marriages. They exist because, like it or not, divorce happens, and a good lawyer can help their clients dissolve their marriage as painlessly as possible. On the surface, this seems not only pragmatic but almost biblical. It reminds us of what Jesus says about divorce in Matthew 19 - that it was never God’s ideal for us but, because of the hardness of man’s heart, it’s been part of life since the time of Moses. It’s also reflective of many of the arguments behind the introduction of the no-fault divorce laws which recently came into effect in the UK.

There’s very little focus on repentance, or on recognising the harm you’ve done to others

Each episode features different clients and reflects on a different aspect of marriage and relationships. Within that, the sisters experience their own relationship trials as well; in particular, the central character, Hannah, has to deal with the revelation that her husband Nathan has been unfaithful. In response, she starts her own affair with an old flame.

Despite her failings, Hannah’s character is constructed to be the one we root for. Actress Nicola Walker plays her as thoughtful, measured and insightful. The entire cast are middle class, well-off Londoners and the show has a sheen of normality and domesticity. That, coupled with the lack of sexual content perhaps blinds us to the more insidious underlying messages that exist within the storylines.

Hannah’s affair is presented as a reasonable response to Nathan’s unfaithfulness. We’re meant to feel sorry for her because she’s felt torn between Nathan and her other love for the entirety of their marriage yet has, until now, managed not to stray. While infidelity is not held up as positive, it is routinely portrayed as largely unavoidable, something that ‘just happens’ and that those at the receiving end are expected to quickly move on from.

At the end of the second series, Hannah and Nathan separate. And as series three begins, he already has a new girlfriend. The attitude of the ex-couple’s friends, who expect Hannah to be completely tolerant of this new relationship, shows an almost unnatural apathy towards their situation.

The sheer level of infidelity in the show - almost every character is cheating or contemplating cheating - normalises this kind of behaviour. There’s a barely implicit message that no relationship is meant to last forever. Also, if you happen to fall in love with someone who’s already married, the damage you do to their current partner and/or family can’t really be helped. It’s just collateral damage.

In the third series, Hannah frequently refers to her marriage to Nathan as ‘broken’. By this, she means not possible to fix. If this is true, it’s due to the infidelity on both sides. Within the context of self-actualisation and self-empowerment, there’s a lot of emphasis on forgiving and moving on. At first glance, this could be taken as a positive reflection of an inherently Christian principle. However, there’s very little focus on repentance, on recognising the harm you’ve done to others and asking their forgiveness, or on trying to put things right.

If you happen to fall in love with someone who’s married, the damage you do can’t really be helped

The conclusion is meant to be a moment of true female empowerment. Hannah agrees to divorce Nathan, to let him go. Sensibly, she refuses her old flame’s offer to move to New York and leave her children. For now, she’s single, but by her own choice. She has to sell the home that she and Nathan own, but she’s financially secure and will be left with plenty of money for a new home. She has her career and her family and appears to have come through her divorce relatively unscathed. She is clearly the divorcee we’re all meant to aspire to be.

But the reality for many in Hannah’s situation is very different: some are bankrupted by having to buy their spouse out of the family home. They don’t have an attractive new partner waiting in the wings, a supportive family or a successful career that they can combine with single parenting. The implicit message is that Hannah is one of life’s winners, despite her infidelity and highly individualistic worldview. Many viewers will be left feeling anything but. As Christians, we know that this portrayal is a lie, as is the majority of what The Split tells us about the easy, disposable nature of marriage and relationships.

Rosie RuthRosie Ruth worked in television for five years before completing a masters degree in creative producing. She now works as a freelance script editor, script reader, film and television reviewer and writes cultural analysis from a Christian perspective.