Your ‘Bible in a year’ reading plan begins with Genesis. And so does the good news

The creation story was utterly unique among Ancient Near Eastern cultures. Instead of warring, angry gods, the Bible tells us that we were created in love, says Lois Tverberg 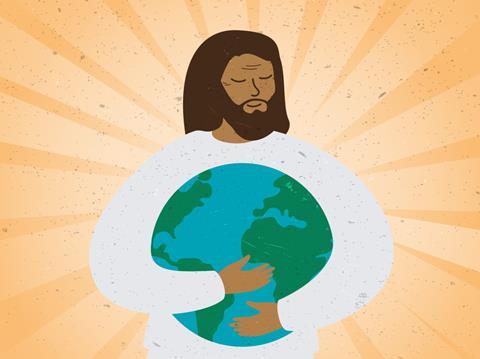 January is a time for fresh beginnings. So many of us like to start afresh in our Bibles and turn back to Genesis again. But what if, as we read the scriptures this year, we decided to mentally put ourselves in the shoes (or sandals) of Abraham and Sarah? How might the creation story sound to them?

You’d be surprised at how utterly unique Genesis was compared to other creation stories that Abraham might have known. Most origin myths featured the tumultuous relationships of human-like gods and goddesses; their stormy love affairs, violent arguments and bloody battles for supremacy. Abraham might have been aware of a creation epic that featured the god Marduk slaying his own great-grandmother, Tiamat, and then hacking apart her corpse to form the sky, the earth and the sea. Hardly a bedtime story to read to your children!

In contrast, the Genesis account is sparse in detail yet awesome in grandeur and profound simplicity. One infinite, supreme God simply speaks creation into existence. In comparison to the blood-soaked divine battles of surrounding cultures, the creation epic in Genesis is ‘demythologised’, revealing that what people thought were gods were merely created things. The sun and moon are not deities, they are just the “greater light” and “lesser light” that rule over day and night (Genesis 1:16). The terrifying leviathan is not a primordial monster, but just an animal that swims in the sea (Genesis 1:21). Genesis proclaims the supremacy of God by negating the dominant mythology of the Ancient Near East (ANE). The pantheon of awe-inspiring ‘gods’ are mere objects and animals created by the one true creator God, and fashioned according to his desires.

Abraham might have been surprised (as we, too, may be) that in Genesis, there is no attempt to answer the question of where God himself came from. Ancient creation epics always included the origin story of the gods themselves. But from the very first sentence of Genesis, the eternal existence and reality of God is simply assumed. This is a pattern that we see throughout the Bible; that, in his infinite majesty, God simply does not feel the need to answer every question that humans have. He allows no images of himself to be fashioned (Exodus 20:4) and he doesn’t respond to Job’s long list of queries (Job 38). He is beyond human imagining and reveals himself only in his own time and way.

Already, we can see that the theology of Genesis was a profound change from the thinking of the ANE world. But the best news to someone in Abraham’s time was its implications for humanity. It was generally assumed that humankind was created to be slaves to polytheistic deities; to relieve them from the daily drudgery of living by preparing food for them (sacrifices) and building and maintaining their houses (temples). Their ‘gods’ were assumed to be encumbered by the same limitations as humans: they got hungry and needed to eat, drink and sleep, and they could be killed. Their overriding concern was to battle other gods to maintain their status in the divine world, not to watch over humanity and care for them, like the God of the Bible.

In contrast, the Genesis account of creation offers tremendous hope. One eternal God created everything and established a universal standard of ethics for all. He is the foundation of all good, he cares about what is good and he created the world and declared it “very good” (Genesis 1:31). His creation – including humanity – is a wonderful thing and, even though it is marred by sin, it will ultimately be redeemed for a great purpose.

It’s true that kings were thought to be commissioned by the gods to establish just laws. But when you look at the Code of Hammurabi (the oldest known legal text from the ANE, composed approximately 1750 BC), there are no actual laws for this purpose. Just the opposite, actually. The punishment of a crime was based on the status of the victim: to kill a nobleman was a crime worthy of death, but killing a beggar carried little punishment at all. This was the opposite of the law of Israel, which enacted many provisions to protect the rights of the poor and ensure all were equal before the law.

IN THE IMAGE OF GOD

You might think that being made “in the image of God” (Genesis 1:27) is about how human beings were created to resemble God – in that we have intellect, will and imagination. But this phrase actually has a very different idea behind it. In the ANE, a king was understood to be the ‘image of a god’, ie the appointed representative that physically represented the god on earth. In Genesis, God decrees that humankind (both male and female) is to “rule over” (1:26, 28) the creation as his royal representative.

Consider the utter contrast with the Ancient Near Eastern idea that humans are only lowly slaves to the whims of divine taskmasters. Genesis was indeed making a shocking proclamation – that humanity was meant to represent God’s goodness to the rest of creation. We are uniquely precious. Humankind was made from dust like the rest of creation, but we alone received the breath of life from God himself. Because of that, God is our kinsman-redeemer, our protector and saviour.

Grasping the royal potential of humanity casts the tragedy of the Fall into even keener focus. Humankind quickly slipped into depravity; first, the murder of Abel by his brother, Cain (Genesis 4:1-16), then Lamech killed a man for wounding him (Genesis 4:23) and then an entire, wicked generation are wiped out by the Flood (Genesis 6). A little bit of rebellion grew until it permeated the whole human race.

Salvation came later, through Christ, but the hope for the world ultimately began in Genesis, as we see the character of the God who created us, and look forward to what he will do to redeem us.