Whatever happened to The Donut Man? I miss him 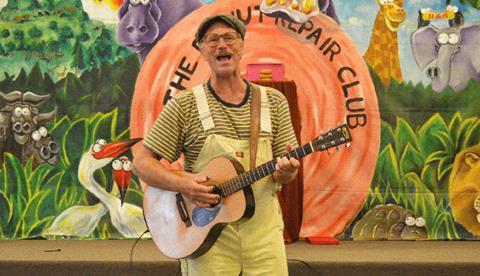 Despite having a theology degree from the University of Cambridge, I am convinced that much of my enduring Bible knowledge was formed during long childhood car journeys listening to the Donut Man.

For those who aren’t familiar with 90s icons of evangelical subculture, the Donut Man and his ‘Donut Repair Club’ released countless sing-a-long cassettes and videos, each designed to show children biblical truths. Through the Donut Man, I learned the profound soteriological belief that “life without Jesus is like a donut, coz there’s a hole in the middle of your heart”. I sang about being wonderfully made; I learned I could do all things through Christ who strengthens me. And I knew the Bible verse to go with it.

Alongside the Donut Man in my family’s favourites was Psalty the singing songbook and his theology for kids in the form of unbelievably catchy tunes such as ‘The butterfly song’ – which listed a number of different types of animals who would thank God for making them who they were; or ‘The body song’ – a glorious take on 1 Corinthians 12, sung as a round, in which each different body part unites with the rest of the body of Christ, coming together in perfect harmony. My sisters and I spent hours perfecting this song in particular; determined to sing all of the parts, although there were only three of us. I’m not sure how my parents coped.

These songs, played over and over and over again, helped to shape our beliefs about who we were and who God was. I still remember all of the words and occasionally find myself singing them at home while my husband looks on in bemusement – or if he’s particularly lucky, I play the originals on YouTube.

I worry about the generation of children being raised by those of us who grew up on the Donut Man – those now described as ‘geriatric millennials’ (born between 1980 and 1985). Many of us look back on our evangelical Christian upbringing and cringe. Some of us have found the controversies within evangelicalism in recent years – from the abuse scandals to the alignment with nationalism and Trumpism – too much to bear. But we shouldn’t throw the baby out with the bathwater. There are things to be salvaged from our upbringing, including the childhood favourites that shaped our faith.

As a parent of a toddler, I find myself worrying about how my son will understand enough of the Bible to make a decision for himself about becoming a Christian. Millennial parents can be so anxious about pushing our children away from the Church by being too overbearing, that we end up saying very little. But children do not learn about God by accident. I have felt this even more over the past 18 months as the coronavirus pandemic has disrupted my son’s earliest years of Sunday school.

I have come to the realisation, however, that my love of sing-a-longs, Psalty the singing song book and the Donut Man may not have been passed down to my son in the gene pool. Following the first return to our church building after it reopened, he declared he didn’t like church “because it’s too sing-y”.

Chine McDonaldChine McDonald is a writer, speaker and broadcaster. She is director of Theos, the religion and society thinktank, and previously headed up public engagement at Christian Aid. She is the former communications director for the Evangelical Alliance. Her latest book is [itals]God Is Not a White Man[end itals] (Hodder & Stoughton). She studied theology and religious studies at the University of Cambridge and is a trustee of Greenbelt Festival and Christians in Media
Follow @https://www.twitter.com/ChineMcDonald