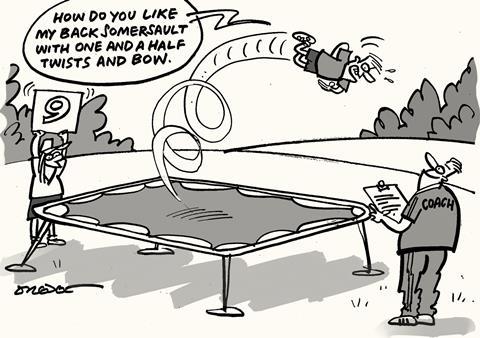 I only met him once, and it was a brief encounter. Prince Philip visited my youth club when I was ten years old. The preparations were intense. A bathroom was refurbished for his exclusive use. Regrettably, the royal bladder was resilient and he did not make use of the gleaming porcelain, but the excitement was palpable, nonetheless. We were given instructions on how to address him if he talked to us and how to bow, but told to continue playing as usual; he wanted to see the youth club in action.

I was bouncing on a trampoline when he arrived, and to my horror, he made a beeline for me. “Do you like trampolining?” he asked. “Yes,” I replied, finding that it was difficult to bow and bounce at the same time. He smiled and moved on.

And now he is gone. Some loved the coverage of his passing, moved by the music that echoed around the chapel; others were less enthusiastic about the BBC’s extended reporting – 100,000 complaints were made because of disruption to usual programming schedules.

During the days that followed, in an online chat with a ministry colleague, I gained some fascinating insight into Prince Philip’s planning of his own funeral and his authentic hope in Christ. The royal family, I was told, are served by the Chapels Royal, appointed by the Church of England and the Church of Scotland. But they also have spiritual advisors of their own choosing. My colleague was one of these, often invited to spend weekends with the family in pastoral conversation and to preach for them on a Sunday. Connecting with the Queen and Prince Philip one year to assist with the Queen’s Christmas speech, the subject of his funeral planning came up. The Prince shared his plan to have ‘The Last Post’ sounded, followed by ‘Reveille’, the morning call to rise from sleep for another day. A regular practice at military funerals, the Duke of Edinburgh was absolutely clear that these two pieces of music would signify his death, followed by the resurrection ‘wake-up call’ that Paul celebrates in 1 Corinthians 15. Surely, the Prince added with a glint in his eye, those who knew their Bibles would “get it”.

Since the beginning of this wretched pandemic, death has edged a little closer to us all. Even those who escaped the bite of Covid personally cannot elude the nightly news and the heartbreaking statistics. As our hearts ache for nations like Brazil and India, still ravaged by the virus, our attempts to avoid the certainty of death have been thwarted. It’s been said that when it comes to success, death is rather impressive – one out of one people will certainly die. But while we can’t evade our own mortality forever, we often work hard to delay it and deny it. We like our undertakers to plant themselves on the back street rather than the high street.

In the Church, we’ve attempted to avoid pie-in-the sky-when-you die otherworldliness with the entirely right and biblical call to echo God’s heart for justice in the here and now, lest the gospel be reduced to being a rather splendid eternal insurance policy, with the premium paid in full.

But the passing of Prince Philip is surely a nudge to us all to remember that, in Christ, death is tamed and overturned. Sometimes doubt smites us when we ponder the eternal because the resurrection of a corpse is quite impossible. But that’s just the point, because with God, we live again eternally, with the one for whom all things are possible.

It’s one reason that this Christian message of ours can be summarised in just two words: good news. As Prince Philip might ask, do we “get it”?