Did Jesus die for aliens?

As the US military gets ready to release an unclassified report into UFOs, David Instone-Brewer looks at the biblical evidence for extra-terrestrial life 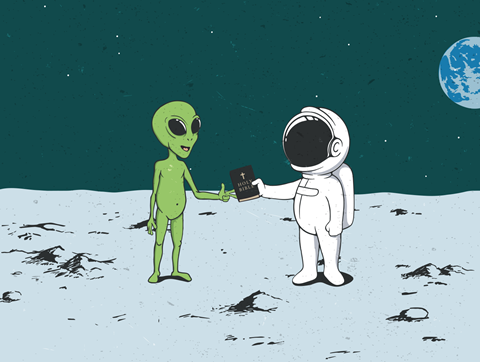 One of Donald Trump’s final acts in office was to order the director of national intelligence to submit a report into “unidentified aerial phenomena” within 180 days. The deadline is coming up this month, and whatever the conclusions contained within this highly unusual report its publication will prove that governments take UFOs far more seriously than many of us.

Most sightings can be explained, of course, but the possibility remains that life may exist outside this planet. Even without UFOs, the trillions of stars and planets in the universe lead many people to conclude that there must be life on more than one planet.

First, it’s worth saying that we already know why God had to make billions of stars. They are all needed to make life possible because complex atoms required for life, like carbon and iron, are formed only inside the core of stars. This means that at least one generation of stars had to burn out, collapse and explode before a planet like ours could coalesce from dust rich enough to form life. And only a universe as large as ours will last long enough for all this to happen. Computer models tell us that too much matter or a higher gravitational constant would make the universe collapse too soon, and lower values would let it expand into cold lifelessness too quickly. Our universe is ‘just right’ in so many other ways that this fine-tuning arguably proves it was created.

Sceptics to the idea of extra-terrestrial life include Richard Dawkins and Stephen Hawking. Dawkins pointed out that life started only once on this planet because all life is related. This means it is an immeasurably rare occurrence, so we can’t conclude that it must happen elsewhere. And Hawking commented that if intelligent life does exist on other worlds, it is strange these beings haven’t turned up to meet us or eat us! Both scientists conclude the question is unanswerable from what we know so far.

Can the Bible cast some light on this? Some Christians propose that the “worlds” in Hebrews 11:3 (KJV) refers to other inhabited planets, and Jesus’ “other sheep” in John 10:16 refers to aliens. However, their contexts suggest that, in fact, the first refers to “the universe” without any implication about inhabitants, and the second to Jesus’ future flock of Gentiles.

For a special wedding anniversary, my wife, Enid, and I booked an apartment in one of the most romantic-looking courtyards in old Rome. In real life it looked as stylish as its photos, though its alley was predictably smelly. In the nearby Campo de’ Fiori there’s a statue of someone looking exactly like the main character in Assassin’s Creed. He’s wearing the same cowl hood, has the same scowl and is glaring with evident anger in the direction of the Vatican.

The plinth identifies him as Giordano Bruno, who was executed in 1600 for teaching several heresies, including that stars are other suns with inhabited planets. The official condemnation is now lost, but the inquisitors no doubt appealed to the fact that the Bible speaks only about life on this world, for whom Christ died once. Would he need to die also on countless other worlds?

THE BIBLE’S PURPOSE IS TO REVEAL GOD’S NATURE – IT IS NOT AN ENCYCLOPAEDIA!

Bruno presumably pointed out that the Bible’s silence on this matter is not conclusive, because it is also silent about many other things. For example, it mentions only nations that interacted with Jesus, his ancestors and his first followers, and it is silent about earth’s other nations and continents. It doesn’t mention the science, mathematics and geography of even the Greek and Babylonian cultures, let alone important future discoveries such as DNA, black holes and frozen yoghurt. The Bible’s purpose is to reveal God’s nature and to tell us the message of the gospel – it is not an encyclopaedia! So if it is silent about life on other planets, this isn’t significant.

CS Lewis explored the idea of life on other planets in his Space Trilogy. His hero, Ransom, visits Mars where the Fall never happened, so the inhabitants don’t understand what evil is or even have a word for it. He is then sent to Venus to prevent a fellow human introducing evil to that planet, where the first pair of intelligent beings have just started life. Lewis skirts round the question of whether Christ would need to die on alien planets by suggesting that earth is sadly unique. Each planet has a spiritual guardian, but ours rebelled, enticing humanity away from God, and polluting the whole planet and the human race with sin.

Does the fact that Christ “died to sin once for all” (Romans 6:10) mean that there can’t be sinners on other planets? Are other worlds either empty or full of good people? Or does it mean that Jesus died once as a human for all humans?

We should avoid looking for hidden facts about the universe in the Bible, because this is not part of the message God intended to communicate. Otherwise, we may bring disrepute on the Bible when we find out the answer, like the Christians in the generation after Bruno. They refused to admit Galileo’s finding that the earth revolved around the sun. Whether it concerns life on other planets or other unknowns, we shouldn’t come to doctrinaire conclusions without a sound basis in the Bible.

The Bible doesn’t attempt to tell us everything we want to know, but it does tell us with absolute certainty everything we need to know for salvation: the good news that Jesus died for all our sins and that God wants to forgive everyone who repents.