Bowel cancer led my husband to Jesus. I pray it does for Dame Debs too

When Louise Blyth’s husband died of bowel cancer aged 34, his death was marked by a supernatural peace that led them both to find faith 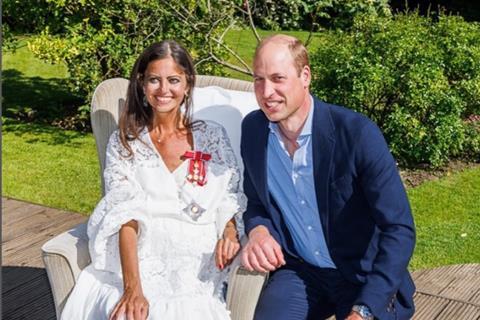 Dame Deborah Jones recieves her damehood from HRH Prince William, the Duke of Cambridge in her parents’ garden at the weekend. Source: @bowelbabe

The story of Deborah James has inundated our screens in recent days. At just 35 years of age, the mother of two was diagnosed with incurable bowel cancer while in the rush-hour season of life. Fast forward five years and last week, she took to social media to announce that active treatment options for her aggressive cancer had now reached an end. It was the message she never wanted to write. She went on to ask her huge following to “buy her one last drink.” As a result, @bowlebabe (as she’s known on social media) raised over £6m for three different cancer charities in a matter of days.

Even the Prime Minister and Royal family have got involved, making a Dame of this exceptional individual with an impromptu afternoon tea party at her parents’ home. Dame Deborah James has fast become the nation’s sweetheart - all while dying - a feat which is relatively counter-cultural in our youth obsessed society which fears death above everything else.

Living more vividly because of death is something I know lots about and, like Deborah, bowel cancer came knocking in my life when we least expected it. My husband – the patient – was just 33 years old when he was told it was unlikely he would live to his 38th birthday. Nothing could have prepared us for this sweat-inducing, stomach flipping, terror-filled moment.

I’ve seen first-hand that the end of life can be beautiful. I would even go as far as saying that I want to die like George

Eleven short months later, we were the ones writing social media posts to announce a death that was looming. Instead of saying goodbye and reluctantly accepting our fate, we too were overwhelmed with love that had unexpectedly erupted as we were dramatically taken from a place of fear to perfect, serene and wondrous peace.

Punched in the guts

At that point in time, Jesus did not feature in either of our lives, beyond being a guy I’d heard about in the odd school assembly. But death had punched us in the guts and, in retaliation, I did something totally out of character. I asked God to show himself - or rather, I screamed at him; I plainly told him it was now or never for him to show me who he was. I was so desperate, so sad and so full of pain that l literally roared at the night sky.

The proof that I asked for came in ways that I could never have anticipated. I imagine it’s much how Dame Debs is feeling now, as this everyday miracle was our equivalent of £6m. Jesus burst into our life. He allowed the end of George’s life to be the setting for a beautifully poignant revelation around death.

Not of this world

I’ve seen first-hand that the end of life can be beautiful. I would even go as far as saying that I want to die like George. He found Jesus just days before his death in a dramatic night-time encounter and, from that moment on, he was so content, so full of love and expectation. His peace and hopefulness were not of this world; all of the fear, dread, pain and anguish that we had been feeling in the weeks, months and days before evaporated in an instant.

It sounds miraculous, and it was. In his last days with us, George spoke about how he had always been so logical, so scientific, so black-and-white about every situation. Now that he was dying, he told us, he could see that his logic could no longer serve him. He described - very logically - how he had switched on his spiritual brain and opened his eyes to see what had always been there.

As George spent his final days basking in the presence of the Holy Spirit, I read him goodbye messages from friends, family and work colleagues. Overwhelmingly, the theme that came through was how he had helped people see the world differently. As I watched him leave his human body, he showed me that love and death were of the same entity. It was love that connected us to God, and it was Jesus who helped us transcend death and see past the heartbreak into the beauty of heaven.

No fear in love

Death and grief have taught me so much about what’s really important in life. When your time comes to say goodbye, you don’t lie back and feel thankful that you decorated your bedroom and tidied out the cupboard under the stairs. You remember people, places, feelings and moments. You long for the sunshine on your face and the wind in your hair. It’s the small stuff that becomes the big stuff – cuddling, holding hands, getting to say goodnight to one another one last time, saying I love you.

George’s peace and hopefulness were not of this world. All of the fear, dread, pain and anguish evaporated in an instant.

Finding Jesus has turned death and life-altering loss on its head. Jesus has shown me that love is a precious part of my soul nothing can take away - not even death. So I grieve with gratefulness, knowing that this is the cost of loving. I give thanks every day that we can all love with an infinite, eternal and transcending energy. It’s love that keeps me alive.

There is so much about death that we must learn in life – especially from those who are on the precipice. At some point the time will come for all of us to carry our cross - just like Deborah is now, and George did in 2016. As a Christian, I now stand on the precious pearl of truth that when my soul’s fixed-term contract with this body is up, I will finally get to be with Jesus full-time.

Of course, none of us can know everything about what this will be like until we get there. But from what I’ve seen on the edges of existence, death isn’t to be feared. It’s just another wonderful part of the adventure of being human. The good news for all of us is that we definitely don’t need a huge social media following or incredible fundraising initiatives to get there - just an accepting heart and open hands. Jesus will take care of the rest, I’m sure, he did it for George and I’m praying for nothing but this perfect peace and joy over our Dame Debs too.

You can read more about Louise and George’s incredible story of finding God in the midst of terminal illness here. Her memoir, Hope is Coming (Yellow Kite) is available now.

Louise BlythLouise Blyth was 33 when she became a widow. Her husband George peacefully died in November 2016 following a short battle with bowel cancer. After George's death, Louise left the corporate world to raise awareness of bowel cancer in young people and discuss the existence of God. The 'George Blyth Trust' funds scientific research and educational programmes associated with bowel cancer in younger people. Louise still lives in Nottinghamshire with her young sons Charlie and Jamie and continues to challenge herself each day to practice gratitude and create spiritual connectivity through prayer. Her memoir, Hope is Coming (Yellow Kite) is available now.