Why the climate threat is bigger than Brexit, Covid and even war in Europe

Even amid the challenges of Covid-19 and the ongoing conflict in Ukraine, climate change still poses the biggest threat to humanity, says Tim Farron. God is remaking the world, but he calls us to partner with him 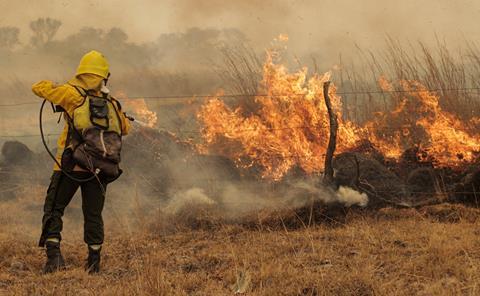 A firefighter battles a wildfire in Corrientes, Argentina, February 15, 2022

We continue to watch the ongoing invasion of Ukraine with horror. Donations, sanctuary for refugees and prayers for peace  and justice are vitally important to show our support for the Ukrainian people in their suffering – yet we feel helpless in the face of the tragedy and evil unfolding before us.

Ours is an interconnected world. People in the UK will feel the shockwaves from this catastrophe. Ukraine produces much of Europe’s grain; Russia is a major source of fertiliser as well as energy. At home, we have already seen energy prices soar. And now oil prices have reached their highest levels since 2008 and are continuing to rise.

Last week, the International Panel on Climate Change (IPCC) gave a chilling warning that the situation with our climate is worse than we thought, and that we must act by the end of the decade to reduce carbon emissions or it will be too late to reverse the trends towards catastrophe.

Much of the environmental damage has been (and is being) done by our reliance on gas and oil to meet our energy needs. The rush now to cut out our use of Russian energy sources gives us an extra kick to move rapidly towards domestic renewables. The Government has committed to a target of net zero carbon emissions by 2050. Given the evidence presented by the IPCC, this isn’t really ambitious enough, but some Conservative MPs and peers feel that it is already going too far. And now Nigel Farage is calling for a net zero referendum, arguing that people should be consulted on the high costs and individual sacrifices that would be required.

If greenhouse gas emissions continue to rise at the current rate, there will be more floods, droughts, violent storms and intense heat waves. There will be dramatic drops in global food production. Whole species of animals, insects and plants will die out, causing ruptures in the fragile ecosystems and food chains that hold our planet together. There will be mass movements of people displaced from their homes and wars fought over productive land as it becomes ever more scarce.

The climate threat we face is bigger than anything triggered by Brexit, Covid-19 or even war in Europe. And it can only be tackled if we work together across communities and continents. Some Christians take the view that climate change is all an inevitable part of God’s plan for our world - something that will occur as the part of the ‘end times’. But many of those at the forefront of campaigning against climate change – and providing practical support to those facing the consequences – hold a Christian faith.

Based on the Bible

The Bible is full of sound principles that should encourage us to fight the injustice of climate change. Our beautiful planet reflects God’s glory. The Bible tells us that God saw his creation as good. We must not shrug off the damage we have done to the world in the expectation that there will one day be a new heaven and a new earth and that, therefore, none of this matters. The way we treat our planet reflects the way we view God. If we want to give honour to the creator, we need to respect his creation.

Human beings are stewards of God’s earth. This does not mean we can exploit it endlessly for our own purposes. It means we must care for our planet and behave responsibly to protect its inhabitants - of all species. In the creation story, we see God giving Adam and Eve responsibility for caring for the garden and the animals as part of their worship to him.

The Bible tells us that every human being – whether they come from Newcastle, Nairobi or New Delhi – is made in the image of God. We must love our neighbour as ourselves. And our neighbour is everyone, no matter where they live. Indeed, it is in the poorer parts of the world that people are experiencing the most extreme climate change events. We need to work on their behalf. We also have a responsibility to those neighbours who have yet to be born.

The Christian faith is one of hope and redemption. If we want to engage the thousands of people who still do not see this as an important issue, or one which is too big to deal with, we must be positive about what we can do to tackle it. Through Jesus’ death and resurrection, we see that God has chosen not to withdraw from the mess that we have made of his creation, but to act from within the world to put it to rights. God is remaking the world, turning it the right way up. This isn’t just about individual salvation; it includes the whole of creation. And he calls us to be part of his plan.