What matters most: sin or climate change?

Is it more important for Christians to talk about the need for action on climate change, or the need to repent and believe in Jesus Christ? Dr Ian Paul says it doesn’t have to be a binary choice 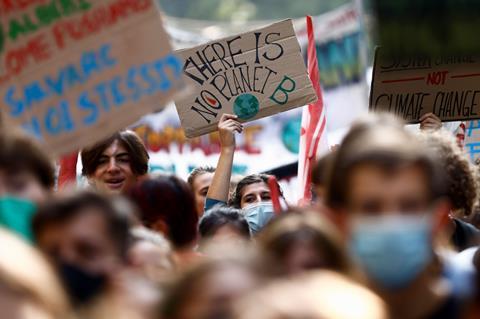 When presented with all such false dichotomies, our first response might be: “If I were you, I wouldn’t start from here!” But here is where we are, as highlighted by some important events that happened last week. On the one hand, many church leaders have been contributing to the discussion about climate change in the light of the UN’s COP26 meeting in Glasgow. Some, such as the Most Rev Justin Welby, Archbishop of Canterbury, appear to have been carried away with the emotion of the moment and spoken out of turn. He claimed that if we did not act, we would be “cursed”, comparing leaders not taking action with those who failed to oppose Hitler in the 1930s. It was an ill-considered and offensive parallel that he later had to withdraw and apologise for.

God is immaterial, so the material world is not our master nor our god. Yet this immaterial God chose to create a material cosmos

On the other hand, Rev Dr William Philip, of The Tron Church, Glasgow, erected a large banner outside his church building, boldly proclaiming: “The world’s most urgent need is churches preaching Christ crucified, not climate change”. For his trouble, the poster was vandalised and then pulled down—a sign of our intolerant times. William justified the approach by noting that it was often the ”negatives” in Jesus’ teaching that caused offence:

“No-one is offended by Jesus when he says: ‘Whoever believes in the Son has eternal life…’ (John 3:36). But Jesus continues with the necessary negative: ‘…but whoever does not obey the Son shall not see life, for God’s wrath remains on them.’ There is the offence for which our Lord was crucified, and all his true apostles martyred, because they witnessed publicly to the truth of that offensive gospel.”

It would be tempting, when confronted with two opposite approaches to an issue, to try and find a happy medium. But it is actually much more productive to ask questions about the assumptions behind each position.

In relation to the climate crisis, there are two sets of assumptions we need to explore: what is the world like? And what are people like?

Climate change activism often appears to make a range of assumptions about the nature of the world. On the one hand, it is a power that threatens us, which we have misused, and that is now wreaking its revenge on us. Some even talk about humanity as a kind of parasite, which the organism ‘Gaia’ (nature as a kind of divine power) wants to be rid of. Others take this Gaia language in another direction: nature is a divine power which we must respect, or even worship.

Scripture calls us to “act justly, and love mercy”  so that the blessings and wealth of this earth are shared with all humanity

In sharp contrast, some Christian traditions see the world as nothing more than a tool for our convenience - something we make use of and are passing through - which is of no ultimate consequence. I don’t think this is the view of William Philip, but some of his comments come close to it when he says: “The message of hope we proclaim is not a hope in human endeavour, nor a hope in this world but the hope of the world to come.” This could be interpreted to mean that we should not seek to preserve the natural world, since it is “passing away” (1 John 2:17). Others go further and, by misreading the imagery of 2 Peter 3:10, believe that the created order will disappear, and that our destiny is to live in a non-physical heaven with God forever.

Biblical theology says something quite different to both of these. God is immaterial, so the material world is not our master nor our god. Yet this immaterial God chose to create a material cosmos. And he chose to create material humanity, male and female, in his image to exercise authority in his place. It is striking that, after every day of creation in Genesis 1, God declares that he saw all that he had made, and “it was good”. On the sixth day, having completed his creation with the forming of humanity, it was “very good”. The stuff of this world is intended to be God’s good gift to us.

But it does not belong to us, and we are to cherish and nurture, not exploit and spoil, this good gift. “The earth is the Lord’s, and everything in it”, says Psalm 24:1. When humanity was commissioned to “subdue and rule over it” in Genesis 1:28, this was a command to exercise God’s just and fruitful power, that it might be the best it can be. And as we do this, scripture repeatedly calls us to “act justly, and love mercy” (Micah 6:8), so that all the blessings and wealth of this remarkable treasure are shared with all humanity. Our destiny is not a disembodied life with God ‘in heaven’, but a bodily resurrection life with God in heaven come down to earth, which John describes in Revelation 21 as a “New Jerusalem”. The return of Jesus will be, among other things, a time of “destroying the destroyers of the earth” (Revelation 11:18). Our hope is that we will “reign with him on earth forever” (Revelation 5:10).

Lazy, sinful or both?

What of the nature of humanity? Again, climate activism often portrays humanity as lazy, self-interested or ignorant, in need of informing, cajoling and hassling into action from our lethargy. The alternative view sees humanity as sinful in a whole range of ways, cut off from the life of God and in need of radical change as we receive the gift of salvation. Scripture tells us that these two views are, in fact, intricately connected.

When Adam and Eve turned from God and ate the fruit, one of the first consequences was that the earth was no longer fruitful (Genesis 3:17)—and even their life of fruitful childbearing would become a painful struggle (Genesis 3:16). When Israel failed to keep faith with God, the prophets said “the earth mourns” (Hosea 4:3, Jeremiah 12:4). The hope of restoration, when God brings his people back to the land, is that everyone will sit under their own vine and fig tree (Micah 4:4); the fruitfulness of the earth marches in step with our obedience to God’s call on our lives.

It is not hard to see how our climate crisis has been caused by the greed of over-consumption, the selfishness of those nations who have exploited the resources of others - often enslaving them in order to do so - and the relentless drive to have more. Jesus described money and wealth as the god Mammon, and the need to possess and consume appears to have a spiritual grip on Western culture.

So we need to act. But to do so, we also need to repent - of sins against God and against our neighbour. It is only when, as a culture, we repent of our greed and selfishness that we will see a lasting solution to the climate crisis. And this will be helped when we preach of God’s goodness, our sin and his free gift of life.

I hope that these two different issues can actually work in partnerships with one another, rather than in opposition. As we build bridges with those concerned about the climate, we can – and should – also be sharing our hope of life everlasting.