Standing up for creation is a sacred sacrifice. My Christian friends came close to prison this week

Christians have a right to peaceful protest, but those in power want to clamp down. If Priti Patel’s last-minute amendments to the policing bill pass, it will seriously undermine our democratic freedoms, says Holly-Anna Petersen of Christian Climate Action 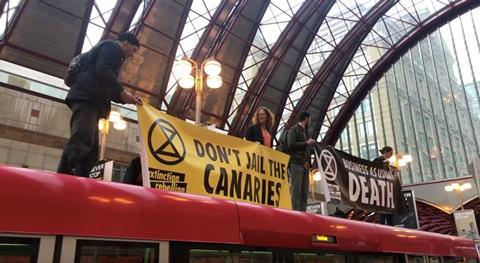 From the opening pages of the Bible, the fall severs our relationship with the creator and creation. And the post-fall reality is that our greed and unsustainable use and abuse of creation is causing climate suffering across the globe.

So, what is our calling as Christians? We are told in Romans 8:19 that “creation waits in eager expectation for the children of God to be revealed”. As a member of Christian Climate Action, an environmental protest group, I love that we are part of a faith which is participatory and that, through our faithful sacrifice, we are participating in the renewing of creation.

On 25th April 2019, five members of Christian Climate Action stopped a Docklands Light Railway (DLR) train at Canary Wharf in protest at London’s financial district funding of the climate emergency. During the action, they climbed on top of the train and held banners that read “Business As Usual = Death” and “Don’t Jail the Canaries” (in reference to three protesters who were then on remand for an earlier protest).

Footage of the action travelled around the world, including video of a tearful Phil Kingston, aged 83 at the time, reading out testimony on why he was taking action for the sake of his grandchildren. Like many others, I found this footage deeply moving. As someone who does not feel brave enough to sacrifice my freedom, it felt meaningful that these people were willing to risk arrest and prison to prevent the suffering of others.

After a long wait for trial, the five were tried last week at the Inner London crown court. They admitted their part in planning and carrying out the action, but argued they were within their rights to protest. After a short deliberation, the jury unanimously came to a verdict of not guilty, deciding that the group’s behaviour was a proportional and lawful response to imminent climate breakdown.

What is clear from the action is that the Christian principal of sacrifice is a powerful one. The sacrifice made by groups such as school strikers, Extinction Rebellion and Earth Protectors has rapidly pushed the topic of climate change up the agenda. This was reflected in the words of the defendant’s lawyer, Mike Schwarz, who said after the hearing: “The defendant’s motives chimed with the concerns of twelve citizens representative of the wider public. The jury all agreed the climate crisis requires radical action. This reinforces the importance of both civil disobedience and juries in a healthy democracy.”

However, the success of protests has elicited desperate responses by those benefitting from the status quo, as they attempt to clamp down and hold onto their power. In recent years, the government has drawn up the police, crime, sentencing and courts bill, which is designed to prevent the right to protest in the UK. Journalist George Monbiot says that if the bill passes, it will be “difficult to attend a protest without committing an offence.” The bill allows the government to ban people who have attended or “contributed to” a protest that is deemed a “serious disruption”, such as being noisy. It would also make it a criminal offence to block major transport works. The bill would give police the right to stop and search people or vehicles without suspicion if they believe that a protest may occur in the area or think that individuals might be carrying protest items, such as placards or flyers. The bill also makes it a criminal offence to cause “serious annoyance” to the public. Those seen to be in breach could face up to ten years in prison.

I love that we are part of a faith which is participatory and that, through our faithful sacrifice, we are participating in the renewing of creation

The bill has passed through the Commons, and has had its second reading in the House of Lords. If it passes, those who want to stand up for creation will face the prospect of years in prison. It’s a barbaric law which could see already overcrowded prisons filled, at great expense to the taxpayer, with people who simply want to see the Government actually acting to tackle climate change – or any other issue - rather than just talking about it.

The power of sacrifice

This won’t affect the actions of people like the Canaries, who sat on top of the DLR. As Phil Kingston said after his day in court: “I knew I might go to prison. That was acceptable to me. I was prepared to take the risk.” But it will affect people like me – the vast number of people who care about the climate crisis, but are not brave enough to risk arrest. Creation is waiting in eager expectation for the sons of God to be revealed, but if we can’t take a stand, will we even be seen?

The citizens that made up the jury could see the merit in the actions of the Christian protestors at Canary Wharf. But the Government appears desperate to silence these prophetic voices.