Why the politicians applauding Russian protests are guilty of hypocrisy

The world might be praising the 6,500 brave Russians who were arrested for protesting against the invasion of Ukraine, but Holly-Anna Petersen says our own government is still trying to criminalise peaceful protest 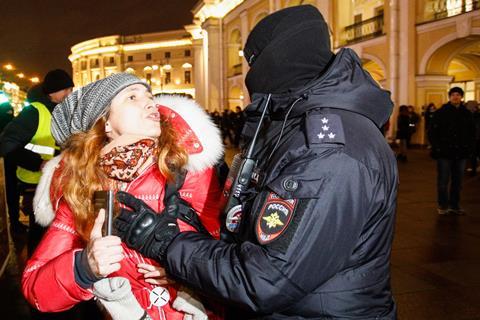 A police officer approaches a woman during a protest outside the Gostiny Dvor business centre.

Proverbs 31:8 calls us to “speak up for those who cannot speak for themselves, for the rights of all who are destitute.”

As Christians, we can often take a light-touch approach to speaking up for others – signing petitions, or maybe a strongly worded social media post, safe from within the comfort of our living room. It seems a long way from the gritty Christ who turned over the tables in the temple when the poor were being exploited there; the Christ whose love took him so far out of his comfort zone that “his sweat was like drops of blood falling to the ground.” (Luke 22:44).

When we have turned on our TV screens over the last few weeks, we have been shown the bravery that is often required to truly stand up for others. Demonstrations have taken place in more than 100 Russian cities since Putin sent his army to attack Ukraine.

MPs here have been swift to applaud the protestors and condemn the Russian state for the fact that at least 6,500 protesters have been arrested since the war began. Julian Sturdy, the Conservative MP for York Outer said: “We must also commend the brave Russian men and women who took to the streets of Moscow and St Petersburg to protest the war and show solidarity with their Slavic neighbours in Ukraine.”

However, while condemning the heavy-handling of Russian protesters, Conservative MPs - including Julian Sturdy himself - recently voted to reinstate clauses in the government’s Police, Crime Sentencing and Courts Bill (the PCSC Bill) that would allow courts to imprison “noisy” protesters for up to ten years. While being outspoken about the detrimental impacts of authoritarian regimes, our own government is still pushing to pass authoritarian legislation in the UK which would make the maximum prison sentence for peacefully protesting against them at least double the maximum sentence for a conviction of actual bodily harm.

This hypocrisy has been rightly highlighted by organisers of UK protests for Ukraine. One, Zoryana, told Open Democracy that passing the PCSC Bill in its current form would make protesting against the war in Russia a criminal act in the UK. “The government is not only removing the freedoms of British people, but also of Ukrainians in the UK,” she said. “Just how different from Russia is the UK if it passes this law? If we are quiet and don’t really bother anyone, then who will be paying attention to us?”

Defending the right to protest

Not all MPs were in favour of the restrictions. Labour MP Sarah Roberts said: “Over the past five days, thousands of people have been arrested and detained at anti-war protests across Russia. We would all defend their right to protest and yet here we are, in the mother of all democracies, debating an amendment to a Bill that would criminalise singing at a peaceful protest in this country.”

As Christians, standing up for justice is in our spiritual DNA. It is right that we are proud of those brave Russians who are standing up to the violence and suffering that Putin is causing in Ukraine. However, as the PCSC Bill gets one step closer to passing, we are sleep-walking into a situation where people will be prevented from protesting against Putin, or any unjust law, in our own country.

From Martin Luther King to Archbishop Desmond Tutu, Christians have a proud heritage of protesting, which has helped to change the world for the better. Yet our church leaders have been largely silent on this issue. Do we assume that they are OK with Christianity becoming a cosy faith, where the gritty Jesus is replaced with petition-clicks and social media shares?

The freedom to protest is a vital part of any healthy democracy, which is why Putin suppresses it in Russia. Our government should not be allowed to do the same here.