Christian communities often have unspoken ideas about how a domestic violence victim should present. As the Depp vs Heard trial concludes, assumptions and judgements are being amplified over social media, and this poses a real issue for victims, says Bekah Legg 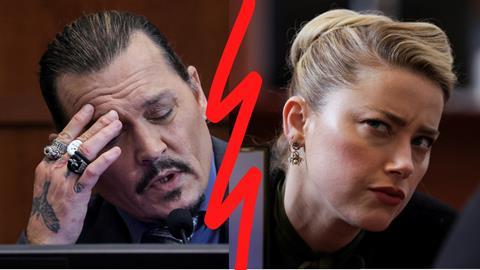 The ongoing Johnny Depp vs Amber Heard defamation case has been all over the news in recent weeks. After reading and watching (often self-selected) articles and videos on social media, it is tempting to take one side or the other. I’m not about to take either side. The jury is still out.

This case, however, has wider importance than these two individuals. One in four women and one in six men in the UK experience domestic abuse. The influence that this case has on the way society responds to and supports those survivors is hugely important.

If you haven’t been following it, here’s a quick summary of the background: In December 2018, Amber Heard wrote an op-ed for The Washington Post titled: “I spoke up against sexual violence — and faced our culture’s wrath. That has to change.” Despite not naming Johnny Depp in the piece, Depp claimed that it defamed him and sued Heard for compensatory damages of “not less than $50m”. In response, Heard filed a counterclaim of “not more than $100m”, accusing Depp of orchestrating a “smear campaign” against her.

The ensuing court case has become a quagmire of allegations. And commonly, when a situation like this gets bogged down in “he said/she said” accusations, observers walk away, hands in the air, feeling confused and uncertain as to who to believe and what to do. So, often, they do nothing.

Victims are left feeling unheard, alone and afraid. Abusers are left feeling emboldened, supported and, often, more determined to control the narrative and their victim. In the Depp vs Heard case, it is not easy to get to the bottom of all that has happened, but there are some very important lessons to observe, both from within the court of law and that of public opinion.

The vilification that Amber Heard is experiencing highlights many of the entrenched mind sets that surround domestic abuse. There is a real concern that these misconceptions will be solidified in the minds of observers. It’s worth taking a look at some of these common myths and addressing them:

If it was so bad, she would have left

Leaving an abusive relationship is the time a victim or their children are most likely to be seriously harmed or murdered by their partner. A perpetrator may threaten to harm the victim, their children or themselves, should they make any attempts to leave. Abuse escalates slowly, quietly eroding the victim’s self-confidence and sense of value. Abusers isolate their victims from support networks. A woman may believe that leaving is outside of the realms of possibility, that no one will believe her. She may have no support and feel she won’t be able to manage alone.

False reports of domestic and sexual abuse are common

The reality is that, under pressure, some victims do lash out. It is a very understandable stress response, triggered by prolonged abuse; a defence mechanism that can, indeed, be very violent. Any outburst like this is often used by the abuser as evidence of the victim’s own aggression or poor mental state and can play into their narrative of manipulation.

If an abuser abuses one person, they’d abuse everyone

We often base our judgements on our own experience of, or relationship with, the perpetrator which, more than likely than not, may be positive. The reality is that perpetrators are not abusive to everyone. Abuse is directional - it is about power and control over very specific people. Even though we know this can happen, it is hard for us to imagine a significantly different person behind closed doors, especially if they are our friend, relative or co-worker. We make exceptions, or excuses, for those we care about.

At Restored, we have also observed - particularly in Christian communities - that people often have unspoken ideas about how a victim should present. The expectation is that they should be gentle, saintly and non-retaliatory; a partner without any flaws. When they are not, it makes it easy for a perpetrator to gain sympathy - and even allies - by outlining their partner’s shortcomings, instability or lack of faith.

Whatever the outcome of the Depp vs Heard case, the fear is that it will switch people off to the realities of situations much closer to home. When people adopt these myths and assumptions as real, it makes it harder for survivors to disclose their abuse, for communities, family and friends to respond well when they do, and for perpetrators to be held to account.

As Christians, we need to be as wise as serpents and remain committed to our calling to support the oppressed by believing those who trust us with a disclosure of abuse. As God’s people, we must take a stand, providing long term support and calling the perpetrator to account. And let’s always, always remain mindful of the impact of social media on our beliefs and actions.

Visit www.restored-uk.org for a newly published Church Guide on how to manage domestic abuse in your communities well.

Bekah LeggBekah Legg is CEO of Restored, a Christian organisation with a mission to speak up about violence against women and equip the Church to stand against domestic abuse and support survivors. She has previously worked as a teacher and a church leader and is married to Steve. Together they have raised five fabulous girls and fostered more in a glorious if sometimes crazy blended family.