No, Mr Graham, the Church should never tell anyone to stay in an abusive marriage

Before a vicar finally called out her husband’s abuse, Anita Grant spent years believing she was to submit and forgive. Following claims in The Washington Post that Franklin Graham pressured a Christian woman to stay with her violent husband, Grant says the Church must do better in supporting victims 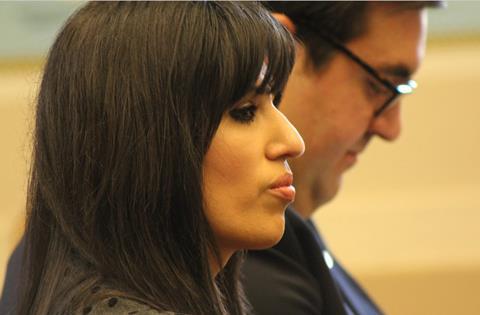 One evening back in 2006, my local vicar looked my then-husband in the eye and said: “Your wife is like a butterfly, you are trying to keep and control her, but you are crushing her.” She had her hand in a clenched fist and she looked down at it, and then opened it. “Let your wife go, you’re squeezing the very life out of her.”

I was in total shock. For the past 18 years, I had received direct and subliminal messages that all marriages are to be worked at; that Christians forgive and that you do anything to keep a marriage together, especially if you are a person of faith. But I was also terrified of the repercussions; this very brave vicar had recognised that my charming husband was harming me and our three children behind closed doors. I hadn’t dared to admit it to anyone before, but he had used knives and belts on us and threatened all manner of things should we dare to tell anyone.

Just like Naghmeh Panahi, who last week claimed the evangelist Franklin Graham failed to take appropriate action after she disclosed marital abuse, I thought my kindness would change my husband’s abusive behaviour. My husband had read the Bible and found all the verses about forgiveness and how a ‘good wife’ had to behave because “that’s what Jesus taught”. But this is a twisted view. Jesus would never want anyone to stay in a place where they were being harmed. He would never want his words of wholesome love and compassion turned into a justification for exerting power and dominance over another human being. I only really understood this after being rescued by the police and receiving counselling.

God cares about the one who’s being oppressed. He didn’t come to save the institution of marriage

In an explosive article in The Washington Post last weekend, Panahi said her beliefs made it difficult to see her “marital experience as abuse.” I can relate. Because there is often no real alternative being spoken about in places of faith. My husband controlled us, and used my Christian faith to keep me trapped.

And similarly to Panahi’s story, I also experienced a lack of validation when I did speak up. Rather than accepting that my husband could be violent, some people in our church family suggested I may have done something to upset him or wondered whether I was mentally ill or needed medication. This further compounds victim’s feelings of helplessness and isolation.

Panahi’s husband, Saeed Abedini, was a pastor. Imprisoned in Iran, his case attracted high-profile support in the US, where both he and Panahi held citizenship, including from evangelist Franklin Graham. But when she confided in him about Abedini’s physical violence and abuse, Panahi says she did not receive the response she expected. In the article, she claims he pressured her to reconcile with her husband, despite her clearly communicating that she was frightened to do so, telling her that abuse was a “gray area” and that, perhaps, she was not being abused, because she wasn’t being “stomped” on every night. I strongly disagree.

Victims of abuse should find unequivocal support within the Church. The fact that Panahi did not, and was forced to turn to the authorities for help, is deeply disturbing. I pray church leaders hear this and take action. The Church should be a place of safety and solace, part of a victim’s support and healing process, not an enabler of abuse. At its best, the Church should be a supportive, non-judgmental community that clearly teaches on what constitutes abuse. The church community where I belong have certainly enabled my family to heal and thrive by taking this approach. But many, it seems, still don’t.

Panahi is right when she says that “God cares about the one who’s being oppressed. He didn’t come to save the institution of marriage.” All faith communities need to do better in providing clear teaching around relationships and abuse: what a positive relationship looks like, warning signs to look out for - in both men and women – and what to do if a relationship turns abusive. Domestic abuse is such a sensitive subject, but excellent support and training for church leaders is out there, from specialist groups like Women’s Aid and the Independent Domestic Abuse Service.

Faith communities should be leading the way in helping to create a more compassionate and loving society where we are all free from fear and able to thrive. Every day that we don’t play our part, more lives are lost right under our noses, often at the hands of the very people who are meant to love us the most.

Telling the stories of domestic violence and abuse is powerful. Powerful enough to make those in charge sit up and take notice. Systemic changes happen when we speak truth to power. So I applaud Naghmeh’s courage, and that of every victim and advocate – like my local vicar – who is brave enough to call out abuse. But there’s so much more still to be done.

The story of Naghmeh and Saeed Abedini is tragic on so many levels. Saeed, a pastor, husband, and father of two children was arrested and imprisoned in Iran in 2012, where he served nearly half of an eight-year sentence before being released, in large part due to the faithful prayers of millions of believers and pressure from the Obama Administration’s State Department. He had been in Iran to visit relatives and continue building an orphanage there.

Near the time of his release from prison, Naghmeh suddenly wrote to supporters and publicly released reports that she had suffered “physical, emotional, psychological, and sexual abuse” for years of their marriage. Her divorce from Saeed was finalised in 2017, bringing an end to their 13-year marriage. I suppose few people on earth can fully appreciate what Naghmeh Abedini has experienced in her life.

During Saeed’s imprisonment Naghmeh was a tireless crusader, effectively drawing national and international attention to his plight and seeking intervention for his release. I was one of numerous American Christians who joined her in this crusade, and celebrated Saeed’s return to freedom in America. We provided extensive promotion of Saeed’s case through our various media resources. Among other things, our ministry offered financial assistance to Naghmeh and her children, as well as to Saeed briefly following his release from prison in Iran. We also offered to provide professional counseling for Naghmeh and Saeed.

Like everyone else who had accepted Naghmeh’s pleas for help securing her husband’s release from prison and worked to mobilise prayer support and public awareness, I was both shocked and saddened to hear, just days before his release, of her account of abuse suffered during her marriage; and I continued to try to help this family in any way I possibly could. Certainly, abuse of any kind—physical, emotional, psychological, or spiritual—is wrong and should not be tolerated or excused.

While I am not a licensed counselor, I did offer limited counsel—to both Naghmeh and Saeed—as a minister. Since then, Naghmeh has been publicly critical of me and the counsel I may or may not have given her. Though she is certainly free to disclose whatever she wishes about her life and her communications with me, I do not believe it would be appropriate for me to publicly disclose or discuss advice or counsel I may have offered to this couple—other than to say it was always my sincere desire to see Naghmeh and Saeed experience Biblical reconciliation and a God-given restoration to their marriage.

Anita GrantAnita Grant is a survivor of domestic abuse. Since finding freedom Anita has raised money for local charities, helped set up Street Angels in her city and now works to help children understand and recognise positive relationships. She and her children have worked with the NSPCC to improve court systems and procedures for the better and Anita has recently written a book It's All Been a Misunderstanding, to bring hope to those in similar situations. It is available via her website www.anitagrant.org.uk