Over the years there has been much speculation about the personal faith of the future king. After a very public divorce and comments made about other religions, some have suggested that King Charles III may not possess the same strong Christian faith as his mother, the late Queen Elizabeth II. But recent events suggest otherwise, says Catherine Pepinster 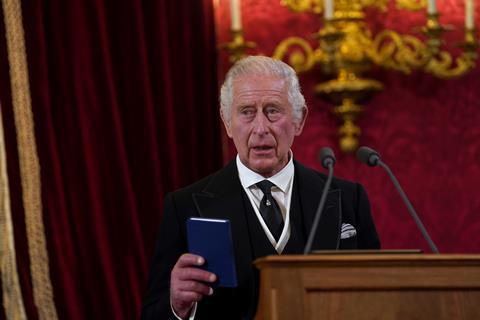 King Charles III made a personal declaration and read and signed an oath to uphold the security of the Church in Scotland on Sept 10, 2022. Source: Reuters

When the new King Charles III addressed the nation for the first time on Friday after his accession to the throne, he paid tribute to his late mother, Elizabeth II, and spoke of his sorrow at her passing. But amid the emotion and the acknowledgement of loss after her record-breaking 70 years reign, there were also references to the complexities of the constitutional set-up of Britain and the way that the state and religion are intertwined.

He said: “The role and the duties of Monarchy also remain, as does the Sovereign’s particular relationship and responsibility towards the Church of England – the Church in which my own faith is so deeply rooted.”

This reference to the Sovereign’s particular relationship regarding the Church of England relates to the role of Supreme Governor of the Church of England, a title dating back to the 16th century and responsibilities for supervising those who run the church, both in terms of its administration and its pastoral care.

For clerics and ordinary members of the Church of England, and indeed, other Christians, Charles’ confirmation of his commitment to Anglicanism must have caused a communal sigh of relief, after much speculation about Charles, his attitude to religion, and to the Church of England. Such speculation would have been unthinkable in recent monarchs. Everyone knew where the previous House of Windsor monarchs stood when it came to personal faith – from George V to his son George VI and on to Queen Elizabeth II.

The only exception was Edward VIII, who abdicated after than less than a year as King in order to marry the twice-divorced Wallis Simpson, which the Government and the Church of England were implacably opposed to. The Archbishop of Canterbury of the time, Cosmo Lang, had indicated that he doubted he could administer the coronation oath to Edward if he did not accept the indissolubility of marriage and, in Lang’s words, he went after personal happiness “in a manner inconsistent with the Christian principles of marriage”.

Nearly 60 years after that Anglican-Royal rift, came another one, when Charles, then Prince of Wales, clashed with Church of England clerics over the breakdown of his marriage to the Princess of Wales and his relationship with Camilla Parker-Bowles. The marriage of a future king was considered so crucial to the future of the monarchy that in 1992, when Prime Minister John Major announced to the House of Commons that Charles and Diana were to separate, he said that there was no question of divorce.

Continuing conflict between the couple, however, led to the Queen agreeing to their divorce with the marriage dissolved in 1996. It took until 2005 for the then Prince of Wales and Mrs Parker-Bowles to marry, some eight years after the death of Diana, Princess of Wales, and, much to the irritation of the Prince, a full church wedding was ruled out, and the couple had to make do with a registry office ceremony followed by a blessing in St George’s Chapel, Windsor.

There had also been concern some years earlier when Charles had told his biographer, Jonathan Dimbleby, that he was concerned about the monarch’s other religious title – Defender of the Faith. In 1994, Charles suggested that “I personally would much rather see it as defender of faith, not the faith, because it means just one particular interpretation of the faith, which I think is sometimes something that causes a great deal of problem – has done for hundreds of years”.

Dimbleby then asked him: So, defender of faith means defender of those who believe in a god in whatever form that you would want to encourage that, that capacity and that urge?

The prince answered: “Yes – defender of the divine in existence. The pattern of the Divine which is, I think, in all of us, because we are human beings and can be expressed in so many different ways. I have always felt the Catholic subjects of the sovereign, are equally as important as the Anglican ones, the Protestant ones. Likewise, I think the Islamic subjects, the Hindu subjects, the Zoroastrian subjects of the sovereign, are of equal and vital importance.”

This caused distorting major headlines, claiming Charles favoured disestablishment. What his comments did highlight was his keen awareness of other faiths, his curiosity about them and his awareness that he would become king of a very diverse nation. Those fearful that he was more interested in Islam than Christianity were assuaged in more recent times following his strong support for persecuted Christians, including the victims of Islamists.

Now that he is king his commitment to Anglicanism is moving centre stage. As well as his own accession statement the other day, he was proclaimed as Defender of the Faith – not defender of faith – on Saturday during an ancient ceremony known as the gathering of the Accession Council, and also promised then that he would uphold the Protestant religion in Scotland. Still to come in his coronation will be another oath, this time about upholding the Protestant religion in England.

So it seems as if the institutional religious ducks are in a row for the new King Charles. As to his own personal faith, we still await the signs that it matches that of his mother. In December we may well find out when the king speaks to the nation in his first Christmas broadcast – the broadcast which Queen Elizabeth transformed into her personal testimony of faith in Jesus Christ.