Why did King Charles vow to protect the Church of Scotland? 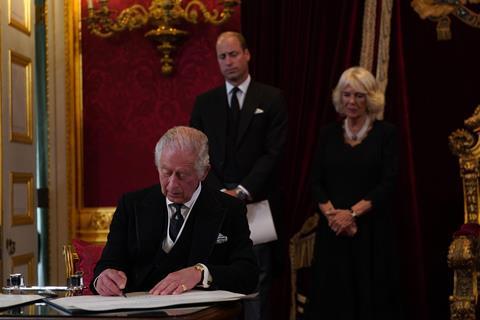 King Charles III signs an oath to uphold the security of the Church in Scotland during the Accession Council at St James’s Palace, London, where King Charles III is formally proclaimed monarch.

In St James’ Palace on Saturday there occurred a traditional ceremony as part of the process by which Charles was formally proclaimed King Charles III.

This included a declaration and oath, made to the Accession Council “relating to the security of the Church of Scotland." These words probably puzzled many:

‘I, Charles the Third, by the Grace of God of the United Kingdom of Great Britain and Northern Ireland and of My other Realms and Territories, King, Defender of the Faith, do faithfully promise and swear that I shall inviolably maintain and preserve the Settlement of the true Protestant Religion as established by the Laws made in Scotland in prosecution of the Claim of Right and particularly by an Act intituled “An Act for securing the Protestant Religion and Presbyterian Church Government” and by the Acts passed in the Parliament of both Kingdoms for Union of the two Kingdoms, together with the Government, Worship, Discipline, Rights and Privileges of the Church of Scotland. So help me God.’

Why was it necessary to refer to Scotland in this manner?

The answer lies in the complexity of British history, with its ultimate roots in a bitter war fought between England and Scotland in the decade before the outbreak of the English Civil War in the 1640s.

In the sixteenth century, Scotland was a separate country and, even in the seventeenth century after the accession of James VI of Scotland to the English throne (as James I) in 1603, it remained a separate kingdom sharing a monarch with England and Ireland, rather than forming a united kingdom. It was a ‘Union of the Crowns,’ in which Scotland remained significantly separate and with its own institutions and identity.

In 1637, James VI and I’s successor, Charles I, and William Laud, the Archbishop of Canterbury, attempted to force the Church of Scotland to use the Book of Common Prayer.

What resulted was an armed insurrection.

This Prayer Book was not Catholic. However, in the fevered atmosphere of the late 1630s, with feelings running high in England against a royal-sponsored attempt to impose High Church practices on a Church which had a significant number of Calvinist-inclined clergy and members (where distrust against royal ‘tyranny’ was close to combustion) it was regarded as such. Similarly, in Scotland, where ‘reformed’ Presbyterianism had long resisted royal attempts to impose episcopal structures (ruled by bishops), the Prayer Book was the last straw.

In February 1638 most of the Scottish nobility and one third of the Scottish clergy signed the National Covenant which aimed to restore the ‘purity of the kirk.’ Such a restored ‘purity’ would be Presbyterian (no bishops for a start) and thoroughly ‘reformed’ in its style and content of services. What followed were the ‘Bishops’ Wars’ and King Charles I lost them. He was forced to accept that the Scottish Church would be different to the Church of England, although the British sovereign rules in both kingdoms.

The formal union into a United Kingdom did not take place until 1707. It was only then that one ‘Parliament of Great Britain’ was established to rule both the kingdoms of England and Scotland; and this was to meet at Westminster. However, the continued independence of the Presbyterian Church of Scotland was hard-wired into the arrangements that were hammered out in the Act of Union.

As a result of this, British monarchs swear to uphold the Protestant religion in Scotland and maintain the Presbyterian Church Government; with the Accession Oath reflecting the constitutional independence of the Scottish Church from the state. The Church of Scotland is entirely self-governing. It is managed on a local level by kirk sessions, at a regional level by presbyteries, and at a national level by the General Assembly.