Call the Midwife usually helps us see God in all of life. But the writers got it wrong on abortion

Call the Midwife never shies away from the big issues, says Jennie Pollock. But in this case, does the Christian viewpoint have to look like the less compassionate option? 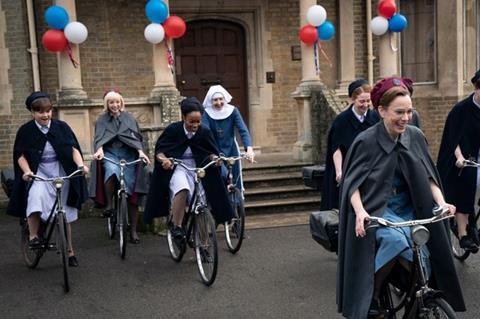 Last night saw the end of the tenth series of Call the Midwife – with the promise of a wedding to look forward to in the Christmas special! I’ve been a fan since the beginning, sniffing along at the heart-warming moments and the heart-breaking ones. As much as I love the show, however, I do get frustrated when it forgets to be a historical drama and forces modern sensibilities on its 1960s characters.

Take the abortion storyline in this latest series, for example. I’m sure there were midwives like Trixie in 1966, who were moved by great compassion for women who found themselves in desperate situations. But I find it very hard to believe that any nuns would sit by and give their tacit blessing to her point of view. What a missed opportunity to have a real conversation about how God’s ways are different than man’s ways, and how Christian compassion can work within that. This is the kind of thing the show usually does incredibly well, helping people to learn to see God’s loving hand in all of life, death, disability and disappointment.

It is also a much-needed conversation just now, as there are moves in both Westminster and Holyrood to legalise assisted suicide.

‘What does assisted suicide have to do with abortion?’ I hear you ask. Well, it struck me during last week’s episode of Call the Midwife that there are several parallels between the way the show argued for abortion and the arguments we often hear for assisted suicide.

I’ve written about it in detail for the Christian Medical Fellowship blog, but one example is the way Trixie had a conveniently selective memory during her radio interview. She emphasised the desperate situations some women find themselves in, “living in dreadful social conditions, with no hope, and no money”, yet just a few episodes earlier she had witnessed an abortion being carried out in a private clinic on a woman for whom none of those things were true.

Those who campaign for the legalisation of assisted suicide share the heart-breaking stories of people with terrible, debilitating conditions who fear that they will die protracted, painful deaths with no hope of relief or release. They tell of family members who they have had to watch begging to be helped to die, to end their misery.

Who could not be moved with compassion in such situations? Yet as with abortion, the few stories of desperation aren’t the full picture. In countries where assisted suicide has been legalised, the tendency has been for the laws to broaden to include more and more people and conditions. There have been cases of people travelling to Dignitas, in Switzerland, to be helped to die because they didn’t want to live with a disability or without their spouse. The US State of Oregon publishes a report every year that details, among other things, the reasons people accessing assisted suicide give for requesting help to die. Last year, fewer than one third of people cited ‘inadequate pain control, or concern about it’ as their reason. Over 94% said it was because they were ‘less able to engage in activities making life enjoyable’ and 93% said it was because of concerns about ‘losing autonomy’.

The desperate extremes do exist, and must be met with compassion and all the help we can give, but we must know that they are not always the full picture.

There are currently over 200,000 abortions every year in England and Wales, despite the fact that living conditions and employment figures (and access to contraception) have improved considerably since 1966 and few people now face the kind of desperate circumstances Trixie was describing. When something is legalised it becomes normalised - and the demand for it increases. We should not expect assisted suicide to be any different.

Christ-like compassion looks different from worldly compassion, but it is still compassion. There are those who like to paint the Christian viewpoint as heartless, as if we care more about morals than people’s actual lives. Sadly, there are far too many stories of when that has been the case, when Christians have acted less like Christ and more like the teachers of the Law that he criticised for loading people down with rules but never lifting a finger to help (Luke 11:46).

Rather than simply responding as the world responds, though ­– making access to abortion and assisted suicide easier ­– those stories should move us to ask God what he would have us do, how we can extend his love and our help towards those in need. Christ-like compassion means putting ourselves out to help those in desperate situations to live well. It means doing all we can to relieve suffering, not just removing the sufferer.

Cyril, the wise and gentle pastor, put it beautifully in last night’s episode (though in a different context entirely): “Sometimes I think we have to look at where the Lord has put us and why and with who, and do things his way.”

The beauty of the show over the last decade has been in its ability to show the characters doing just that, acknowledging the circumstances God has placed them in, and learning to face them with courage, grace, and a bit of help from their friends. Long may it continue.