Earlier this year, the British parliament declared that China is committing genocide against the Uyghur people. The list of abuses includes the imprisonment of over a million people in sinister ‘re-education camps.’ China initially denied the existence of these camps, but was forced to acknowledge them because of the work of a few key investigators. One of them, Dr Adrian Zenz, is coming to Newcastle next month for an international conference on the genocide. Professor Nick Megoran asked him about his work, and the Christian faith that motivates it 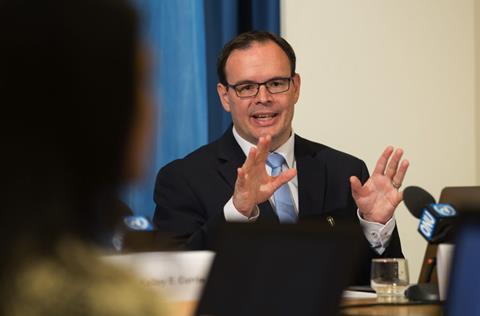 You have become well-known for your work on Uyghurs and other minorities in Xinjiang. Can you tell us about this region, and what has happened there recently?

The Uyghurs are a central Asian people, whose language, culture and spirituality is much closer to Istanbul than to Beijing. They speak a Turkic language and, like nearly all of Central Asia, they were converted to Islam centuries ago. After very brief periods of political independence in the 1930s and 1940s, the region was conquered by Mao Zedong’s armies in 1949.

Between 1950 and 2000, the government brought millions of Chinese settlers to Xinjiang to colonize the region. Starting in the early 2000s, the Chinese government pursued a policy of ethnic and linguistic assimilation, reducing the amount of Uyghur language education and enforcing greater degrees of Chinese language teaching instead. As a result, in 2009 resentment boiled over in the region’s capital of Urumqi, with hundreds if not thousands killed in clashes between the Chinese and the Uyghurs. Since then, Beijing implemented an increasingly draconian police state in the region and deployed one of the world’s most sophisticated digital surveillance systems. Starting in 2017, the government rounded up perhaps over a million Uyghurs to brutally indoctrinate them in political re-education camps.

You have arguably been the key person in exposing what has happened. How did you do that?

After my fieldwork in China, I increasingly used government documents to complement my work. I analysed official reports and public recruitment documents for all Tibetan regions in China, and found that a surprisingly large number of new public sector jobs for Tibetans were in the police force. I then used this method to research the mounting state oppression in Xinjiang. In 2017, I discovered that in Uyghur regions, the state had embarked on an unprecedented drive to recruit tens of thousands of new police personnel to staff thousands of newly-built community police stations and checkpoints.

In 2018 I began looking at information from public construction and procurement bids, official budgets, local government reports, and state media and propaganda articles. This helped me prove the existence and likely scale of the re-education camp network. Later, I used the same approach to uncover evidence of forced labour, parent-child separation, compulsory birth prevention, and the mass sterilization of Uyghur women.

You have spoken of the importance of your Christian faith. What was the role of that for you here?

I grew up nominally Catholic but eventually lost interest in church and religion. In my 20s, however, I attended an evangelical church retreat and had a very real and surprising personal encounter with God. This imbued me with a greater sense of purpose. After completing my PhD, I sensed God’s leading to continue to research Chinese government documentation, especially public recruitment and statistical yearbook data. I was not very successful in publishing it because it was a real niche topic that nobody else was working on.

However, with the generous help and encouragement of another academic, Dr. Fischer, we began to co-publish some of the initial findings. Over the years, the persistence paid off and I was able to develop a research method based on these new data sources. However, it remained nerdy niche work, whose significance was only evident to a small number of experts in a very narrow field.

In 2017, this niche work became suddenly extremely relevant. In the face of Beijing’s crackdown in Xinjiang, it became a prime source of information because Chinese government documents revealed what the state was doing to the Uyghurs. For example, some of the documents bluntly said that so-called ‘vocational training centres’ had to have security cameras, barbed wire, watchtowers, and police guards. Others said that their purpose was to ‘wash the brains’ of the detained Uyghurs. The Chinese government had rejected eyewitness statements as false, but found it much harder to deny what their own documents admitted about the atrocity.

By 2020, the new method had been used to document a wide range of atrocities in the region, and major media outlets worldwide and other researchers had begun to adopt my methods. All the years of hard work in obscurity had paid off. Most importantly, the resulting findings have made a major contribution to uncovering these horrendous atrocities and are impacting the policies of many countries. The issue has been picked up by governments, parliaments and international organisations around the world, who have recognised that what is happening in Xinjiang is one of the worst mass cases of human rights abuses in the world today. For example, after I published on the use of widespread forced labour in cotton harvesting in December 2020, the US government banned the import of all cotton and related products from Xinjiang in January 2021, and the European Parliament issued a resolution condemning the use of forced labour in the region. I believe that God equipped and used me to discover and expose these atrocities.

Why should Christians care about what is happening to the Uyghurs, and what can they do about it?

Beijing’s oppression of the Uyghurs constitutes the largest internment of an ethnoreligious minority since the Holocaust. Even though there is no mass killing or death camps, there are sadly many similarities to the oppressions of the 1940s in Germany: a sophisticated police state, internment camps, the destruction of religious sites, forced labour, and forced sterilizations.

For us as Christians, this is a call to action. It is our duty to speak out for the oppressed, to be a voice for the voiceless. The Uyghurs may be far away, but they are our neighbours on this planet. Their situation is absolutely desperate.

Importantly, Beijing’s oppression of the Uyghurs is bad news for religious freedom throughout China. The methods of policing and ‘re-educating’ the Uyghurs are tested and refined in Xinjiang. But they don’t stay there. China is using similar methods against other religious groups in the country – including Muslims, Catholics and Protestants.

Not only that, Chinese companies are exporting surveillance systems to other authoritarian nations. Systems of surveillance and oppression that were developed or refined in Xinjiang could be deployed to a growing number of places in the world. That is another reason why it is important to speak out about this.

This 21st century atrocity should serve as a wake-up call for us all. We should speak out as churches, as individuals, by contacting our elected representatives, and by supporting relevant campaigns. Also, we should urgently pray for justice and freedom from oppression for all those persecuted in China.

Finally, we tend to think of Christian work as being pastors, missionaries, teachers, charity workers, and the like. You’ve shown us that what you call ‘nerdy’ work can also be used to serve God. What does your experience tell ordinary Christians who aren’t doing more traditional church work?

We have all been given abilities and skills that God wants us to use to help others and make a difference. Nobody is exempt from that. I am just a normal person, whose skills and interests suddenly had a major impact. However, that did not happen overnight. God often prepares people for a long time in obscurity, refining their character and developing their skills. If we are willing to stay close to him then we shouldn’t be surprised when he uses ordinary people to achieve extraordinary things. That’s how it has worked throughout history.

God made us for a purpose. Walking in it won’t be easy, but it will have an eternal impact. I would challenge every person to find their calling and walk in it.

Professor Nick MegoranProfessor Nick Megoran is Professor of Political Geography at Newcastle University, where he researches ethnic conflict in Central Asia. He is also Minister of Wallsend Baptist Church. His latest book is Big Questions in a Time of Global Crises (Wipf and Stock)