Stef Reid: The world champion Paralympian on the accident which changed her life

Stef Reid is a five-time world record holder. She is also on fire for God. I met the reigning world champion long jumper at Loughborough University. It was a few weeks before the coronavirus lockdown began, and she was busy training for the Paralympics. We met in a hotel adjacent to the indoor track and high performance centre, in what reminded me of a smart university dorm.

I was struck by Stef’s unusual accent. Born in New Zealand, to British parents (her dad is from Glasgow, and her mum is from Durham County) she travelled the world as a child, although the American twang she occasionally slips into is the result of living in Dallas, Texas for three years with her Canadian husband and fellow Paralympian, Brent Lakatos.

The 35-year-old holds an honours degree in biochemistry, and away from the track works as a broadcaster, actor and model. She’s always been passionate about sport – running, jumping and pushing herself to do better from an early age. She describes herself – both then and now – as “really, really competitive”. Initially, she fell in love with rugby and wanted to pursue the sport as a career. Her dream, to play internationally, looked entirely possible, given her remarkable abilities.

A boating accident while on holiday in Canada scuppered her plans, and ultimately changed her life. The 15-year-old suffered severe propeller lacerations, and her right foot had to be amputated. She remembers crying out to God in the back of the ambulance, begging for mercy.

A few weeks after our conversation, the news broke that the Tokyo Olympics and Paralympics would be postponed until 2021. I picked up the phone to Stef. She was still digesting the news, but was clear she wanted to make the most of it. “I’ve struggled with injury this past year and this gives me more time to prepare,” she explains, adding: “We think we have control, but this is a good reminder that we don’t. Part of being a human is being able to adapt and move on. I have found we are always challenged more than we are ready for, but God always gives us an extra portion of grace to deal with whatever comes our way.” 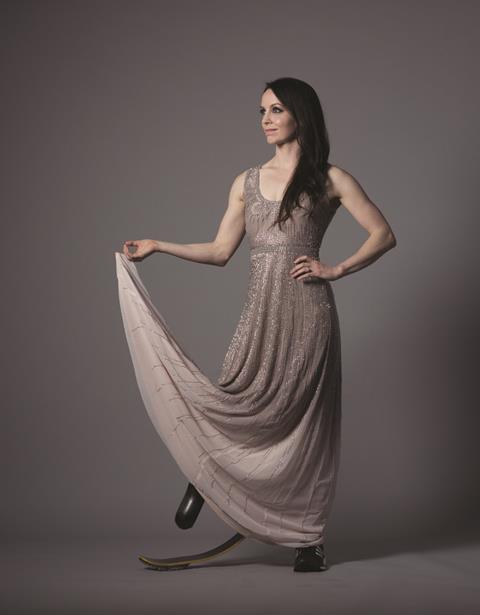 Tell me about the accident that changed your life.

I was 15 and at a friend’s cottage for a bank holiday weekend. It was next to a beautiful lake north of Toronto, Canada. They had a boat and we spent much of the weekend doing this really fun activity called tubing, where you attach a rubber inner tube to the back of a powerboat, it tows you and you go flying across the water. It’s super fun; you fall off occasionally but the boat comes back, and you get back on.

On the Monday we decided to go out one last time. And, as usual, I fell off. I was waiting to get picked up by the boat, but I knew something wasn’t right. I could just tell that the boat was coming at me way too fast. And I knew that the driver hadn’t seen me.

I switched into survival mode; there wasn’t really much emotion attached to it. I just thought: “Right, what are your options because you really need to miss that propeller, or you’re going to die.” I was a great swimmer, but I knew I didn’t have enough time to swim to either side, so I thought my best option was to surface dive. And so I went to dive down, but had totally forgotten I had a life jacket on, and I couldn’t get under. At that point there was no time.

Afterwards, I remember people in the boat panicking, and seeming really worried. And I said: “Guys, I’m fine. Wow, that was really close. Let’s not tell our parents about that.” And then it was this wave of realising I’m not fine, but I don’t know why. I remember reaching down just to check myself. And that’s when I realised that I had big lacerations to my lower back. I actually thought I’d been cut in half at that point. That was when the shock kicked in.

It was really scary because we were in the middle of nowhere, and I knew there was a lot of blood loss. That was when the possibility of death crossed my mind. I felt this deep sense of: I’ve not done life well. I don’t think anyone else would have thought that; I was an able student had lots of friends in school. But I had never asked God what he wanted for my life. I had never acknowledged him, I had never honoured him. I never really lived in light of this huge gratitude for the grace he was showering on me every single day. And that moment hit me really hard, because I knew that if I had died, I was probably going to be one of those people where I said: “Hey, God, it’s me,” and he would say, “I don’t know you.” That was terrifying. And I prayed in that ambulance for the first time, “God, save me.”

I woke up from surgery and I had no spinal damage. I was fine. And I thought: “Wow, God was there and he was amazing and he saved me.” Then I found out that, unfortunately, they hadn’t been able to save all of my right leg and had to amputate my foot.

I was devastated. Sport was my dream. It was what I lived for. It was my life. I just thought: this was not part of the deal. Why would God save me and then take away the one thing that I loved the most?

Were you able to forgive the driver of the boat for his part in the accident?

Incredibly, I found it easy to forgive the driver. It was an accident. I suspect the ease of forgiveness had less to do with me and much more to do with God. In many ways it was harder for him. He had lots of difficult emotions to process as well, and probably not as much support and care as I did. 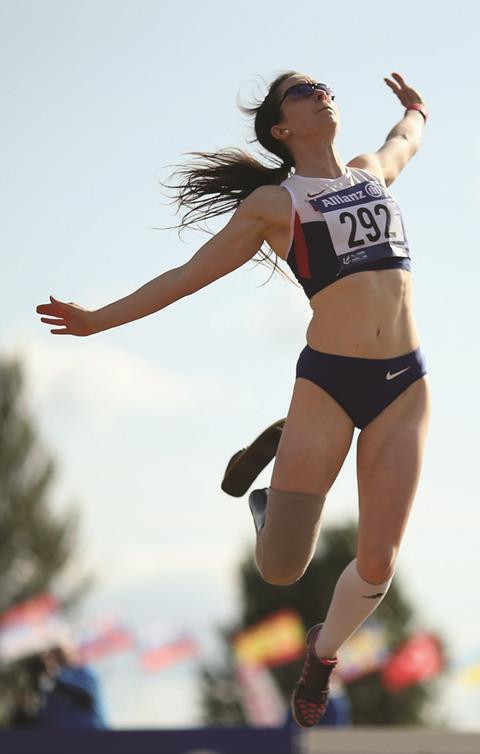 What did you learn about God as you went on the recovery process?

God broke down a lot of things I thought I knew about him, and things I thought a Christian life would be. A lot of it was getting rid of childish understandings of God, like, ‘I’m going to pray and God will do exactly what I ask him to do!’ I had to understand God is wild and untamed, but he’s good. I don’t control him. I can speak to him and he will always be with me, but he’ll always be slightly mysterious. And that’s a good thing. I would be bored and disappointed with a God I fully understood.

I had to realise that being a Christian doesn’t mean you’ll never face hardship. It was a five-year process of exploring my faith. I had a palpable sense of peace in my room, and so I was learning about the Holy Spirit, and paying more attention to God.

You were just a teenager when the accident happened. How comfortable did you feel in your new body?

That was one of the toughest things – just looking in the mirror and not seeing what you want to see. It took a really long time to accept this was how I was going to look.

You don’t get given an artificial leg right away. You have to wait for the scars to heal. So initially, I would go around on crutches and there was nothing there.

I remember meeting my prosthetist, Shane, for the first time and asking: “Can you make a foam foot, so that people stop staring at me?” He looked at me and said: “I can. But I’m not going to. Because this is who you are, and you need to accept it.” It sounds harsh, but it was the best thing. You need to live in reality.

Often now, when I speak in a school, I’ll have this discussion with a headteacher who wants me to bring a message of “You can do anything you put your mind to”, which isn’t something I can get behind. That sounds really harsh, but it’s reality. We all live in a context, so it’s important to respect that context and accept God has put you here, and you have certain abilities and certain limitations.

How did sport resurface in your life once you had recovered from the injury?

I didn’t really know much about Paralympic sports. When I went to university, it coincided with the time that there was a girl on my dorm room floor who was involved in athletics. She was a sprint hurdler. I found out about these amazing running blades and I got a hold of one and started training with the university team.

I realised: “Oh, I’m actually not bad!” and just kept progressing and training. I got to the point where I needed to make a decision: am I going to pursue this absolutely ridiculous dream of being a sprinter with one foot? Bearing in mind, this is 2006, and before a lot of people even knew what the Paralympics was. So it was a bit nuts!

Do you have a rhythm of prayer around event days?

That has been a really hard journey and it’s something that can’t just happen on race day. Faith is so complicated and God is so complicated. I remember when I first started, I would pray: “God, let me win.” That was my prayer. But then you think well, hang on a second. What if everybody on the start line is praying that? What if we’re all Christians?

And if God already knows the end result, and if God is in control, isn’t he just going to pick who he wants to win anyway? So why would I bother training? Where does my effort actually come into this?

So there was this really complicated process of figuring out when I’m unsuccessful that doesn’t mean that God doesn’t love me, or mean I’ve done something wrong. I’m just realising that my job – regardless of what I’m doing – is always to bring my best. I need to be able to sit before God and just say I did everything that I could. And I don’t control much beyond that.

We live in a world where I cannot guarantee the results. I might work unbelievably hard for these four years up to Tokyo. And I might wake up with a stomach bug and just not be able to compete that day. And what does that say about God and what will my attitude towards that be? Will I still trust him?

I think part of the reason why God set me again on this path of sport is he knew this was the best way to teach me some of the lessons that I need to hear, and to deal with some of the struggles that I have. Things like failure – you fail all the time in sports! Sometimes I think he went for immersion therapy: “I’m just going to inoculate her so much against this just so she realises I don’t care if she doesn’t finish all the time” because failure is a great tool in order to learn how to grow. But, you know, sport won’t be forever. And I sometimes think “God, what do you have for me next?”’ This was definitely a phase of preparation...for what, I don’t quite know. But that’s exciting.

To hear the full interview listen to Premier Christian Radio at 9pm on Sunday 24 May or download The Profile podcast premierchristianradio.com/theprofile