The performance of the England football team at Euro 2022 is changing the game for women’s sport. But win or lose, our sporting talents are a gift from God. Male or female, we should use them for his glory, says Rosie Woodbridge 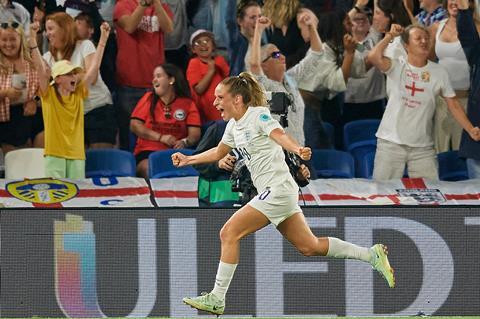 As momentum builds for tonight’s Euro semi-final against Sweden, it’s a big moment for women’s sport.

Attendance and viewing figures for the tournament have already been breaking records, and hopes are high for an England victory. But irrespective of the result, this tournament is set to be a real game changer for the future of women’s football.

Football is traditionally seen as a men’s game in the UK. For the women who do play, there has not been anywhere near the same level of investment, coaching, visibility or pay. The opportunities fall far short of those available to men.

But things are starting to change.

The Women’s Super League (WSL) turned professional in 2018 and is now televised by BBC and Sky Sports. Female footballers are becoming household names, proudly displayed on the back of replica shirts. Sam Kerr now stars on the front cover of the FIFA 23 video game, and Lucy Bronze features alongside Messi, Ronaldinho and Pogba in TV adverts. The USA men’s and women’s teams now get equal pay.

What impact will this have on future generations? Northern Ireland player, Simone Magill, used the phrase: “If you can’t see it, you can’t be it.” This has, historically, been the case with women’s football.

I have always loved watching men’s football. But watching women play is different: I can connect with it; it is relatable. As I watch the skill, athleticism, technique and mental resilience of female players, I feel as if I am on this journey with them. These women inspire me to get my own boots on far more than watching men’s football ever has.

As you run, jump, defend or score, you are living out the very image of God

The hope is that many women and girls will be similarly inspired. FIFA are aiming for 60 million women and girls to be playing by 2026. When I was growing up, the idea of being a professional footballer was not an option (and not just because of my lack of skill!) But it’s different now. There is a pathway; there is opportunity. They can dare to dream.

While there is still plenty of criticism around, millions of people are celebrating the growth of women’s football and will continue to fight for something closer to equality.

This growing movement towards equality actually finds its roots in the Bible. In fact, it could be argued that the Bible gives us the best foundation for encouraging female sports players.

In the very first pages of the Bible, we see the immense creativity of God displayed, as he speaks the universe - in all its diversity and wonder - into being. This reaches its climax with the creation of human beings.

Creation tells us that women matter to God. He does not see them as less worthy than men

This tells us that both men and women are created in the image of God. This is the greatest stamp of approval possible; a declaration that human beings are of infinite value and worth - both male and female. Equal.

It tells us that both men and women can reflect the creativity of the creator God who made them in his image. Humans are given bodies, with gifts and talents to use and cultivate for his glory. This includes the ability to play sport.

If you have the ability to run, jump, tackle, defend, pass or score… as you use those talents, you are living out the very image of God. You - male or female - are born to play. Creation tells us that women matter to God. He does not see them as less worthy than men, or less able to get on the pitch and use the gifts he has given us. Every drill, every match, every training session, every lift, every shuttle run. When you score or if you miss. Every assist and every incomplete pass. Every tackle and every time you get beaten. Every victory or defeat. Whether you’re in the starting line up or on the bench. Whether you’re playing professionally or with your friends in the park.

Go and play. You’re born to do it. Go and live out the image of God, and know that, as you play for his glory, he is smiling down on you.

So tonight, as you cheer on the Lionesses, watching the incredible skill and talent on display, be inspired by these gifted players. But more than that, look beyond, to the magnificent, creative God who gave these women the gifts, talents and opportunities to be where they are now. And praise him for it.

Rosie WoodbridgeRosie writes occasionally for Christians in Sport. She is an ultimate frisbee player and is at St Mary’s Basingstoke with her husband Tom and young daughter.