The pure joy seen in the Lionesses’ celebrations during Euro 2022 echoes the gender-equality joy that runs through the gospels, says George Pitcher - if only we are looking for it 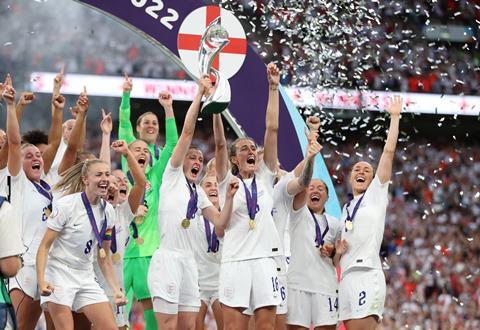 There was something different about the Lionesses’ goal celebrations in the Euro championships this summer. Not just different from the men’s game – different from other women’s football teams too.

Note the way players such as Beth Mead and Georgia Stanway wheeled away after scoring: grinning, not gurning, with their hands raised but open. Not the ubiquitous clenched fists of typical sportspeople. These are fierce competitors, but the emotion is overwhelmingly joyous, rather than aggressive.

Then there was Chloe Kelly’s extra time winner in the final at Wembley. The sheer shirt-swirling joy of it. Author, Lucy Ward, nailed it with her tweet that went viral:

This image of a woman shirtless in a sports bra - hugely significant. This is a woman’s body - not for sex or show - just for the sheer joy of what she can do and the power and skill she has. Wonderful. #Lionesses pic.twitter.com/Bjrpozf6kj

There’s that word – joy - again. If you take a look at some of the fan-shot footage, which shows more of the pitch, you’ll see two players simply and quietly hugging each other in midfield. Another is seeing to her team-mate’s cramp – knowing they’re minutes from triumph, but still looking out for each other.

Much, if not all, of this mental attitude must be down to their coach, Sarina Wiegman. It really is quite unusual in sport - and its women’s football that seems to have placed it centre stage. Each player showed an unbridled joy in each other’s ability and power; the equal of anyone, not just in sport, but in the world.

Other than Wiegman, where does it come from? Funnily enough, I’m reminded of a Carly Simon rock-gospel anthem, ‘Let the river run’, the soundtrack for the 1989 movie Working Girl: “Let the river run / Let all the dreamers / Wake the nation / Come, the New Jerusalem.”

The idea of the New Jerusalem is traced from the Old Testament prophet Ezekiel, through the New Testament book of Revelation, to William Blake’s 1804 poem, which provided the words for the well-known hymn ‘Jerusalem’. The idea, throughout history, is that there is a new kind of city of God, built on joy and love rather than aggression and subjugation.

It’s the daughters we’re celebrating right now, thanks to the Lionesses

Ward’s tweet (I respectfully presume) didn’t intend this meaning, but in the ancient world in which the New Jerusalem was first predicated, a woman’s body was very much exclusively for “sex or show”. It’s all too easy to overlook the social and sexual revolution that the early Christian movement was unleashing – largely because the Church that it spawned did its very best to stamp it out for centuries.

When the first followers of the Christ are holed up in their safe-house in Bethany, just outside Jerusalem, we are told the story of Mary and Martha. Martha complains that she is doing all the work, while Mary listens to the Nazarene. Jesus tells Martha to let Mary be. (see Luke 10:38-42).

This is still widely told as evidence that Bible study is more important than housework. Well, duh. The far more significant issue is that Mary is in the room with the men, which would have been unheard of in those days when there was man’s work, such as theology, to be done.

The gender-equality of joy runs throughout the gospels for those who look for it – from the Samaritan woman at Jacob’s well (John 4) to the woman taken “in adultery” (most likely a euphemism for prostitution, see John 7:53–8:11); from the Syrophoenician woman at the men’s table who begged Jesus for a miracle (Mark 7:24-30) to Mary Magdalene as the first witness to the risen Christ (John 20:11–16). And that’s before we get to the liberated, powerful women of the epistles and Acts, such as Lydia (Acts 16:11–15) and Phoebe (Romans 16:1-2).

These are women’s stories that bring tears to the eyes, not least because they were buried under the temple stones of patriarchy. And it’s this depth of history that may (albeit subconsciously) have in part contributed to the sheer emotion that accompanied the Lionesses victory, which was surely so much more than just a football game. Tears were abundant and their source may not be such a mystery.

England veteran, Jill Scott, movingly said all the hands that had gone before in the women’s game would be on their trophy. I suggest that, in sharing their joy, there are even more hands on it. The Christian story doesn’t own that, but it’s a recognisable source.

There are other, more recent sources of the emotion that accompanied the Lionesses’ achievement. After two Covid-wracked years and the heart-breaking horrors of violence against women, including the abduction, rape and murder of Sarah Everard, the well of tears is all too easily breached by such images of female joy.

Again, we return to our ancient and recurrent sources of joy in Christ. Back to Carly Simon’s song: “We’re coming to the edge / Running on the water / Coming through the fog / Your sons and daughters”.

It’s the daughters we’re celebrating right now, thanks to the Lionesses. So let the river run – it’s a river of tears of pure joy.