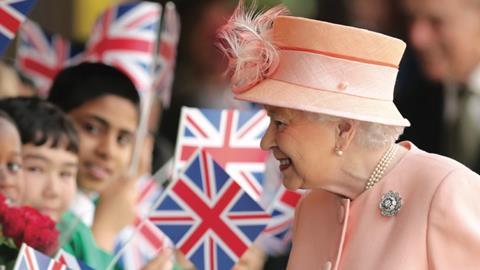 The Christian faith of our servant Queen

In the troubled days of the 1930s, King George V was fretting about the future. He was fearful of what would happen in Europe as resentment grew in a German population humiliated by defeat in the first world war.

He was concerned about the problems facing Britain, in particular economic troubles, and believed that the monarchy should be close to the people. He was anxious about his eldest son, the Prince of Wales, predicting: “After I am dead, the boy will ruin himself within twelve months.” And he went further, saying: “I pray to God my eldest son will never marry and have children, and that nothing will come between Bertie and Lillibet and the throne.”

George V turned out to be a prescient king. His eldest son, Edward VIII, lasted less than a year as monarch, famously abdicating to marry the twice-divorced Wallis Simpson and making way for Bertie, who became George VI and subsequently, his granddaughter Lillibet, crowned Elizabeth II, who this year marked 70 years as queen. Throughout her record-breaking reign – she was the longest-ever serving monarch of this country – she was quite clear about one thing above all: that she was a servant of the people and of God.

DEFENDER OF THE FAITH

Elizabeth II had a public role to play in terms of religion – she was the Supreme Governor of the Church of England and, like all monarchs since Henry VIII, held the title of Defender of the Faith. But she had a very strong personal faith as well. As she put it in a message to the Bible Society, of which she was patron, at the time of her 90th birthday: “I have been – and remain – very grateful to you for your prayers and to God for his steadfast love. I have indeed seen his faithfulness.”

The Queen’s faith was, in many ways, particularly influenced by her grandfather, George V. His was a simple, Bible-based belief, which included reading a chapter of scripture every night until the end of his life. Those who knew Elizabeth II said that she, too, was fond of her Bible and prayer book. While these composed the backbone of her faith, she was not one for lengthy intellectual discourse with notobale theologians.

We were all used to seeing the Queen at church services, whether national occasions of thanksgiving, commemorations, memorials, royal weddings or funerals. But she was a regular Sunday church attendee too, publicly in the summer at Crathie Church in Balmoral and at Christmas visiting St Mary’s, Sandringham. More privately, she worshipped at All Saints Chapel in Windsor Great Park or the chapel at Windsor Castle.

While George V listened closely to the sermons of visiting clergy at Windsor and Sandringham, he preferred them not to be lengthy. It was an attitude mirrored by the Queen and the Duke of Edinburgh years later, who also preferred what was frequently termed by wits as ‘short church’, rather than high or low. 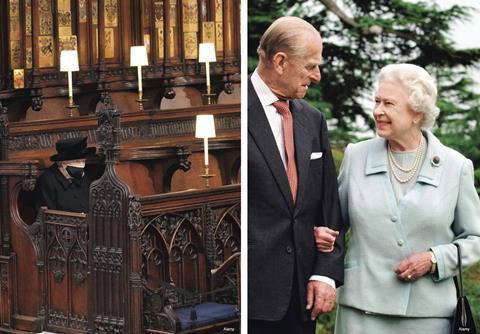 It was George V who was responsible for two of the most notable public religious moments of the Queen’s year throughout her reign: the Maundy Thursday service and the annual Christmas broadcast. The first he revived and the second he invented.

The word ‘Maundy’ derives from the mandatum, or command, in John 13:12-15 that Jesus gave his followers at the Last Supper, while he washed their feet. “You call me Teacher and Lord – and you are right, for that is what I am. So if I, your Lord and Teacher, have washed your feet, you also ought to wash one another’s feet. For I have set you an example, that you also should do as I have done to you” (NRSV).

As far back as the medieval King John, English kings are recorded as giving Maundy alms, with some taking the ceremony particularly seriously. In 1556, the year of Mary I’s 41st birthday, she washed the feet of 41 women. As she knelt before them, she also gave them 41 pence each, plus other gifts of bread, fish and clothes, including her own gown.

In later times, the involvement of the monarch was minimal. Foot washing was out but special coins were distributed and some members of the Royal Family attended. Then in 1931, Princess Marie Louise, granddaughter of Queen Victoria, went to the Maundy Thursday service and suggested that her cousin George V should distribute Maundy money the following year. He agreed, but it was the only time he attended. Edward VIII carried out the distribution himself in 1936, while his brother George VI did so intermittently, interrupted by the second world war. It was Elizabeth II who became the most assiduous distributor of Maundy money and took the tradition around Britain to different cathedrals. The recipients were nominated by their local dioceses for contributions to their local church and community. In this sense, the service became rather like a royal pilgrimage: it was the only occasion in the year when the recipients of an award did not travel to meet the Queen; rather she travelled to them. 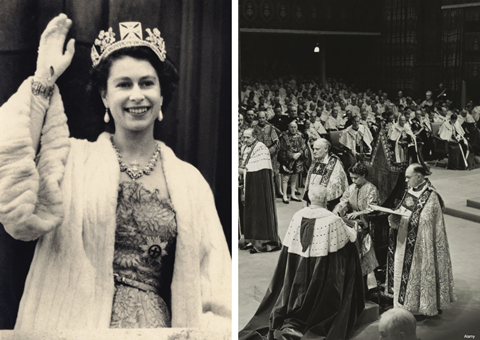 The service, wherever it was held, followed the same pattern. There were always two readings, of which the first was the mandatum from John’s Gospel and the second was the account of the Last Judgement, from Matthew 25:34-40, when people are challenged regarding how they have treated others, particularly those who are hungry, thirsty, a stranger or a prisoner. It finishes with the words: “Truly I tell you, just as you did it to one of the least of these who are members of my family, you did it to me” (NRSV).

There were always two gifts at the service: a white leather bag containing special Maundy coins and a red leather one containing other money. A man and a woman were chosen for each year of the Queen’s age, and the money also represented the years she had lived. Handel’s ‘Zadok the Priest’ was always sung – the same music, based on the words of 1 Kings 1:38-40, which was sung at the Queen’s coronation in 1953; a reminder of the vows that she made then. Just six years earlier, when she was 21 years old, she made another vow to the people of Britain, the Commonwealth and the last vestiges of empire, during a trip to South Africa: “I declare before you all that my whole life, whether it be long or short, shall be devoted to your service and the service of our great imperial family to which we all belong.

“But I shall not have strength to carry out this resolution alone unless you join in it with me, as I now invite you to do. I know that your support will be unfailingly given. God help me to make good my vow, and God bless all of you who are willing to share in it.”

Just as she asked for support during this 1947 speech, so she did again prior to her coronation. During her first Christmas message in 1952 – six months before her crowning – she said to those listening: “I want to ask you all, whatever your religion may be, to pray for me on that day – to pray that God may give me wisdom and strength to carry out the solemn promises I shall be making, and that I may faithfully serve him and you, all the days of my life.”

Decades on, the Queen’s commitment to service through being alongside her people was poignantly evident at that most personal of occasions, the funeral of her husband, Prince Philip. As it took place during Covid restrictions, the Queen sat masked and alone.

It is doubtful that anyone would have objected if a family member had sat with her, offering solace, but instead she chose to be just like other widows at that time, adhering to social distancing rules. In doing so, she offered solidarity with her people – and in her vulnerability, displayed an authenticity that was strikingly powerful, all the more so when it was later discovered that the night before the funeral, there was an unlawful gathering in Downing Street, where those same restrictions were disregarded. 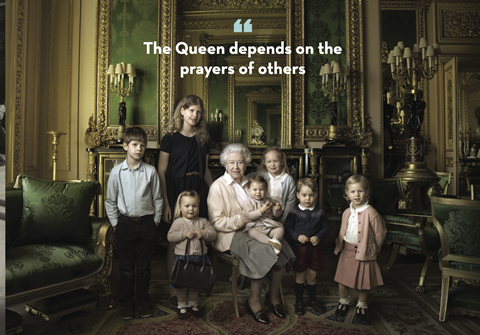 Elizabeth II followed in the footsteps of her grandfather, George V, and her father, George VI, both of whom made use of radio to address their people. At first, the Royal Family’s Christmas celebrations at Sandringham were interrupted for the live broadcast to be made. The inaugural televised speech took place in 1957, but since 1960, it has been pre-recorded.

It is not just technology that changed. The tone and content of the messages did too. The early broadcasts, after that first plea for prayer, were not particularly religious but instead included accounts of the Queen’s year, family milestones such as weddings and christenings, and general good wishes. But at the turn of the century, all that changed. On 31st December 1999, the Queen marked the millennium with the prime minister, Tony Blair, and other public figures in the Millennium Dome. As the crowds sung along to ‘Auld lang syne’, her expression suggested she wasn’t very impressed by the New Labour ‘Cool Britannia’ vibe. Twelve months later, on Christmas Day 2000, she spoke to the nation, pointing out what she felt the millennium was really about: “Christmas is the traditional, if not the actual, birthday of a man who was destined to change the course of our history. And today we are celebrating the fact that Jesus Christ was born 2,000 years ago; this is the true millennium anniversary.”

She went on to speak very frankly about her own faith: “For me, the teachings of Christ and my own personal accountability before God provide a framework in which I try to lead my life. I, like so many of you, have drawn great comfort in difficult times from Christ’s words and example.”

It was a turning point. Her words are said to have elicited a huge postbag of approval and since then, the Queen’s message – always broadcast at 3pm on Christmas Day and always her own words – was marked by a willingness to express her staunchly held Christian beliefs.

At the heart of the Queen’s reign was her commitment she made at her coronation when Most Rev Geoffrey Fisher, former Archbishop of Canterbury, reminded her: “You are this day consecrated to be our Head and Prince, so you may continue steadfastly as the Defender of Christ’s Religion; that being rich in faith and blessed in all good works, you may reign with him who is the King of Kings.”

Her interpretation of what that meant was evident in the way in which she signed off her statement, published on 6 February this year, the 70th anniversary of her accession. It said, simply: “Your servant, Elizabeth.” It indicated a monarch who recognised not the glamour and power in her role but duty and service. That service was steeped in and profoundly influenced by her Christian beliefs. She was the Servant Queen who served the Servant King.