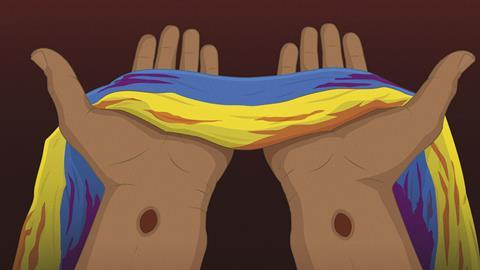 Easter reflection: Why Jesus is still the hope of the world

Jesus’ resurrection takes place against a backdrop of grief and despair. As the world grapples with war in Europe, Rachael Newham reflects on how the sadness of Good Friday and Holy Saturday reveals a king who came to minister to us not through power and might but through scars and tears

John’s account of Jesus’ resurrection appearance begins with tears: “Mary stood outside the tomb crying” (John 20:11). The greatest day of all time, the root of our joy as Christians, begins with grief. The tears of Good Friday and Holy Saturday were still wet on the faces of Jesus’ friends when he returned to them. They’d barely had a chance to process the agony of the worst day of their lives, in which their saviour and friend had been killed, taking with him their hopes for the future, before everything changed again.

We don’t know a great deal about Mary Magdalene, but we hear in Luke’s Gospel that she had been freed by Jesus from seven demons. The nature of the demons is not clear, but we gather she suffered a great deal before she was healed. She was a woman who knew pain and rejection herself, and she chose to be present alongside Jesus in his final dark days, even standing at the foot of his cross. As soon as the Sabbath was over, she rushed to visit his tomb. It was likely that Mary was going to clean and embalm Jesus’ body ready for burial. In her mourning, she sought to serve the man who changed her life, in whom she found healing and freedom.

For Mary to discover an empty tomb must have been a gut punch; she would have presumed that Jesus’ body had been stolen, and by extension, her opportunity to care for his body and grieve him properly. It is a situation many of us are all too familiar with: being unable to say goodbye to the people we loved in the way we would have liked to during Covid-19. We have been left not only to mourn the person, but also the way in which we had to say farewell.

John’s Gospel (20:11–18) records the tears that fell from Mary’s eyes three times. Perhaps John is emphasising how strange and unexpected it was that Jesus chose to present himself in the way he did  through sadness and loss. In the early morning light, blinded by tears and confused about where the body of her saviour had gone, Mary mistook him for the gardener. The fact that she didn’t recognise Jesus contains its own beautiful truth: that he, like a gardener, is ushering in new life from the depths of darkness, if only we might look for the work of his renewal. It was not until Jesus spoke Mary’s name that she finally realised who she was seeing. John 20:16 says: “Jesus said to her, ‘Mary.’ She turned towards him and cried out in Aramaic, ‘Rabboni!’ (which means ‘Teacher’).”

NOW AND NOT YET

It’s worth noting that the testimony of a woman was not allowed in a Jewish court of law; the world in which Mary lived placed no value on female words and witness, and yet it was Mary, a woman who suffered greatly and worshiped faithfully, who was entrusted to share the news of Jesus’ resurrection, perhaps with her eyes still brimming with tears.

The first sign of life we give as tiny babies is our cry; it’s the sound that parents wait for, their own breath baited until their newborn at last announces its entrance into the world. The initial rush of relief and joy is often accompanied by a release of tears. Perhaps it is not so strange after all that the resurrected Jesus appeared first through tears. Our tears are our sign of life. In the Easter story, they are a sign of the new life Jesus offers; the new hope he embodies now that he has taken our sorrow to the grave. One day every tear will be wiped away (Revelation 21:4).

This is how the hope of God shows up time and again, in scripture and today, through the vicissitudes of life. It shows up in our brokenness, tears and scars. It reminds us that the kingdom of God is now and not yet; it has arrived and yet we also ache as we watch the pictures on our TV screens, of wars, famines and disasters, and wait for its fulfilment. Even though Mary’s reunion with the risen Lord was perhaps not how she might have imagined it, she proclaimed: “I have seen the Lord” and, in doing so, became a bearer of good news.

If it was surprising for early Christians to hear that Jesus’ first post-resurrection appearance was to a woman, perhaps it was even more surprising that he spent the morning hanging out with a couple of heartbroken friends on the road to Emmaus. Many of us have spent much of the last two years going on walks: cramming conversations about life and death, love and loss into the sanctioned social interactions allotted to us in lockdown. There is something about the rhythm of walking that enables conversation. I expect that when Jesus joined Cleopas and his unnamed friend on what would have been a long walk through a haze of grief, and began asking what was wrong, it was akin to an alien landing on earth in 2022 and asking why we have such strong feelings about the last two years! The heartbreak wasn’t unique to Cleopas and his friend. Their words: “We had hoped that he was the one who was going to redeem Israel” (Luke 24:21), resound through the millennia to the hurting here and now; a reminder that we can share our hopelessness with the God of all hope. 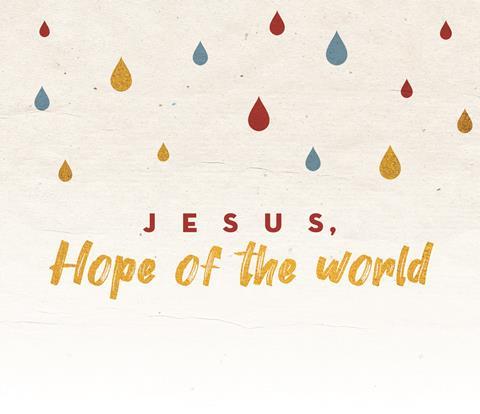 THE DARK NIGHT OF THE SOUL

“We had hoped” are words that have resonated as I’ve walked through my own valley of mental illness. The rollercoaster of recovery and relapse, of new therapies and medications offering renewed optimism – only to be dashed once more – has been exhausting. Mental illness can make people like myself desperate for escape, for an end to the pain. But what this passage in Luke 24 shows me, more than anything, is that Jesus responds to us in the most beautiful way. In our most painful times often all we want is a listening ear. Jesus did that for Cleopas; he listened to his hopelessness and confusion – even though he knew he was the answer Cleopas was looking for.

As much as it is a story of triumph over the grave, the Easter story is also a reminder of the God who meets us in our fragility, with his gentleness

When Jesus finally did speak, in some translations it can sound a little harsh – “How foolish you are” – but Jesus wasn’t telling Cleopas off for his inability to see clearly; Jesus was revealing something of himself and his story. Because that’s what Jesus did next – he told his story. He walked Cleopas through everything the scriptures said about him and then finally revealed his identity through the scars on his wrists as he broke bread before them. It isn’t always easy to tell our own stories, particularly the hard parts. It can be costly, but it can also reveal the character of God in ways we might not expect.

The first few appearances of Jesus after his resurrection are not what we expect. They demonstrate gentleness and loving kindness rather than a blaze of glory, and they can’t fail to bring us comfort. They illustrate that the hope Jesus brings is for everyone. He is seen through the tears of Mary and through the dashed dreams of those he walked alongside. When Jesus journeys with us through our darkest nights, he also reminds us of this story of heaven’s hope and death’s despair. And that hope always has the last word. We might be living through uncertain times – war in Europe, a cost of living crisis and rising mental health problems – but this story has a truth that we can hold onto tightly.

Jesus’ resurrection appearances speak to the hardest emotions of human life, and Jesus himself was not unmarked by his ordeal; his wounds allude to the fact that trauma leaves a lasting legacy. Over the last 20 years, there has been a growing recognition that trauma is not limited to those who have been on the battlefield; trauma is the response to any situation in which you feel under threat or powerless. For many of us, the Covid-19 pandemic has been a crash course in this; whether or not you were personally affected by the illness, the world seemed to stop overnight. And in the face of trauma, language falls short. We are left without the ability to tell the story of that which has so injured us; we need images and symbols to bridge the gap between our pain, our present reality and the grief that trauma has left behind.

As the months have rolled on, people have begun to share their trauma, whether that has been facing death on the wards, losing a loved one or the effect of lockdowns on mental health. In my own life, my experience with mental illness has been traumatic, but the images of Mary’s tears and Jesus’ scars have continued to minister to me. In the aftermath of suicide attempts in my teens, I could not piece together the narrative of what had happened. It was too traumatic for my mind to understand, and yet, the absence of a proper memory tormented me. I wanted to remember the experience with a beginning and an end to put it in my past. It was not until I began to write the story of what my family and I had been through – in my first book, Learning to Breathe (SPCK) – that I could see how God had held us through some of the worst years of my mental illness. It was almost as if hearing the whole story, and then telling it myself by writing about it, enabled me to file it in my mind’s library, remembering it with sadness, but no longer consumed by the terror of flashbacks and nightmares. The pain of the past does not disappear; but it is now infused with the comfort and hope of Jesus, who joins us in our feelings of hopelessness and in our weeping. 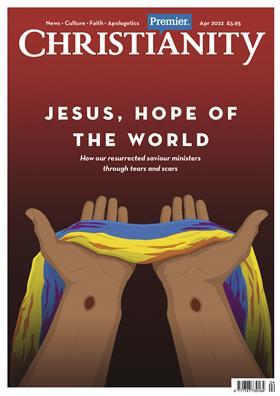 Together, we must now attend to wounds left behind by the past few years and the current events in the world around us. We must also remember, that for many vulnerable people, isolation and fear are unchanged. But this is the beauty of the Easter story: as much as it is a story of triumph over the grave, it’s also a reminder of the God who meets us in our fragility, with his gentleness. The stories of Mary Magdalene and Cleopas demonstrate that there is life and hope amid the wounding, and it is found in the person of Jesus. So, as we re-tell the Easter story this year, from pulpits, around tables and at bedsides, I encourage you not to rush but to pause and remember how our King came to minister to us, not through power and might but through scars and tears.

Rachael Newham’s latest book And Yet: Finding joy in lament (SPCK) is out now

Rachael NewhamRachael Newham is an author and the mental health-friendly church project manager at Kintsugi Hope. You can find her on social media @RachaelNewham90. Her new book And Yet: Finding joy in lament (SPCK) has been chosen as one of the Big Church Reads and is available now.