Why did Paul tell women to submit to their husbands?

What exactly did Paul teach in the New Testament, and how should Christians understand and apply his teaching today? David Instone-Brewer sheds some light on this deeply divisive issue 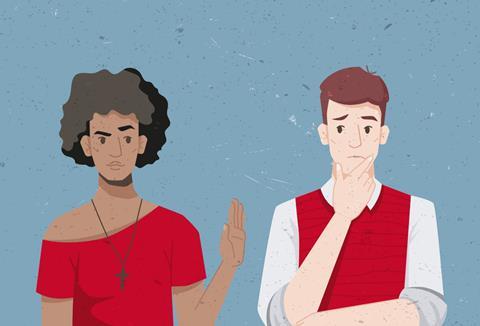 It’s a thorny subject, but the inescapable fact is that Paul, and other New Testament writers, clearly tell women to submit to their husbands. Today, teaching wifely submission is hugely problematic, not only because it can create difficulties in some family relationships – and even lead to abuse – but also because it puts people off the gospel.

So Christians are divided. Some decide to do what the Bible told ancient believers to do. Others look for the reason behind the commands, and reflect on whether Paul would say the same today. Deciding which policy to adopt is important, because both have consequences.

Paul told slaves to do their work with submission and try to please their masters without question or answering back (Titus 2:9). Applying this to employee/employer relationships today would be difficult to justify: when employees don’t complain or speak up about things that are wrong, this can result in PR and HR disasters, perhaps with serious repercussions for themselves, others or their employer.

But in Paul’s day this teaching made sense, because of the legal relationship between masters and slaves. Slaves were the property of their master and, as such, were expected to follow instructions unthinkingly. Someone who did otherwise would be regarded as rebellious and disloyal, so a Christian behaving in that way would have brought the gospel into disrepute.

Wives and husbands also had a different legal relationship to today. Legally, a husband was responsible for the actions of everyone in his household, so if his wife broke the law, he could be prosecuted. Today, we are all individually responsible for what we do: if your wife or employee breaks the law, they are legally liable, even if they acted on your orders.

NO BARRIER TO THE GOSPEL

Paul hated slavery and listed slave traders alongside those who murder their parents (1 Timothy 1:9-10). And although he didn’t start a campaign to end slavery, he did say that Christians shouldn’t regard slaves as inferior. We are “all one in Christ Jesus” says Galatians 3:28. We may therefore assume that believers would free any slaves they owned as soon as they reached the age of 30, the minimum legal age for emancipation. Presumably Onesimus was under 30, because Paul sent him back to his master, albeit with a letter recommending kindness to him and urging Philemon to treat him “no longer as a slave, but…as a dear brother” (Philemon 1:16).

For Christian slaves, it was a far bigger issue. Paul told them to obey their masters and to do so “with sincerity” (Colossians 3:22), so Titus, understandably, wanted to know why. Paul’s reason was: “so that in every way they will make the teaching about God our Saviour attractive” (Titus 2:10). For him, the most important thing to consider was the progress of the gospel.

Similarly, the reason he gave for wives to submit to their husbands was “so that no one will malign the word of God” (Titus 2:5). His motive wasn’t to teach principles for successful family relationships, nor mirror the Church’s submission to Christ (as might be inferred from Ephesians 5:22-24). His main concern was to make sure that nonbelievers didn’t get a bad impression of Christians. That may seem a little ironic today, given that many nonbelievers are offended by what they see as Christianity’s subjugation of women but, at the time, people would have found a wife’s disobedience to her husband deeply immoral.

Roman morality was based on Aristotle’s famous three principles of household relationships: children submit to parents, slaves submit to masters and wives submit to husbands (Great Ethics I.1194b.5-28, written by a disciple). Paul and Peter told Christians to follow these principles too (See Colossians 3:18- 4:1; Ephesians 5:22-6:9; 1 Timothy 2:9-3:7; 6:1-2; Titus 2:3-10; 1 Peter 2:18-3:7) and Jewish writers such as Josephus and Philo urged Jews to do the same (Contra Apion 2.201-215; Hypothetica 7.3, 14). However, Paul added several important limitations to these pagan principles. He balanced the instruction that wives should obey their husbands by commanding husbands to love their wives sacrificially (Ephesians 5:25) and he told masters to respect slaves as equals under God (Ephesians 6:9). Both highly countercultural in their day!

There was a feminist movement in the Roman world that campaigned for equal rights and, by Paul’s day, women had gained the right to spend their own money. Unfortunately, some squandered it and others took lovers to show they had other rights that were equal to men. Like the early feminists in our society, they were often viewed with suspicion and hostility. Many saw their behaviour as tarnishing the reputation of other women – as would wives who refused to submit to their husbands. So Christian wives were called to submit. If they didn’t, non-Christians might assume that this new religion was also sexually permissive and morally corrupt.

We might conclude from these verses that Paul didn’t care about slaves or wives. But perhaps he was concerned about eternal life for everyone more than improving this life for some. In my mind, the slaves and wives who decided to follow Roman household codes so that the gospel wasn’t hindered are among the true heroes of the faith. They enabled the gospel to spread far enough to reach us.