From satanism to saving grace

George Bearwood was immersed in the punk rock scene before getting caught up in satanism and becoming addicted to drink and drugs. A brush with death led to him getting clean before, one night, the voice of God called out to him 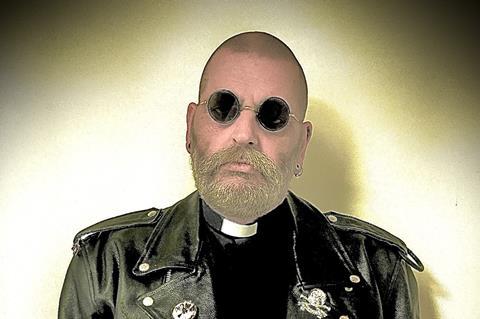 I was born in the 1960s to a working class family in the Black Country. My mum was killed in a speedboat accident when I was two, so I was raised by my grandparents. I became a teenager just as punk was starting. I joined a band, we got a record deal and started playing shows. But a week after I left school at 16, the record company dropped us.

I’d already developed a drink and drug habit by then. If you’d have asked me if I was happy, I would have said: “Yeah.” But if you caught me when I was actually sober, I would have probably said: “No, life is a complete pile of crap.” But you never want those down days, so you stay high and drunk as much as possible.

Getting bored of punk, I stumbled across the industrial movement – bands like Psychic TV and Death in June – and slipped into more of an occult world. I became a member of the Church of Satan. They accepted me for who I was. I have some fond memories of those times; I actually think I would have died if it weren’t for some of those people. They looked out for me.

All of a sudden the words: ‘Go to church’ jumped into my head. I thought I was having a mid-life crisis

The drinking, drugs and sex was all about escaping something (I was never quite sure what) but, over time, it escalated to taking heroin. I went from having a couple of drinks at the weekend to a bottle of vodka every morning.

One night I went to a party, took drugs and drank an awful lot. I collapsed and was taken to hospital. They zapped me back to life but it scared me to death. I stopped drinking straight away. It took about a year to get clean of the harder drugs and four years to be free of everything. This was the 80s, when rehabs were for rich people, so I just locked myself in my flat for a month. I felt like I was going to die every single day. You sit there, sweat, vomit and soil yourself. That first year was the worst of my life.

WELCOMED IN, THEN LET DOWN

In my early 30s, I lost interest in satanism. I didn’t make a conscious decision to leave, but I realised I was probably an agnostic or atheist. I started a music business, and was working in my studio at 4am when, all of a sudden, the words: “Go to church” jumped into my head. I ignored it, but it kept happening. I thought I was having a mid-life crisis.

One day, I was passing St Mary’s Church in Stoke Newington, London. They had an organ recital on, so I went in. The vicar came over and we got chatting. The next morning, a Sunday, I woke up at eight o’clock, which was unheard of. I thought: I’ll go back to that church. I had no idea what was going on – they were all sitting down, standing up and crossing themselves. I thought: This is insane.

I don’t know why, but I arranged a meeting with the vicar. I said: “I think I want to be a priest.” I spent two hours telling him about my past, thinking: He’s going to think I’m a nutjob. But he just said: “Well, you need to start coming to church first.” So I started going every day. I was nervous because I’d hung around with satanists for years, telling me that Christians would burn me at the stake. But I loved being there.

After six months, I took a job as church verger. After that, I trained for the priesthood. I hated every second of it; some of my fellow students were the least Christian people I’d ever met – and I’d known gun runners, drug dealers and gangsters! They were so judgemental. One would tell people that I was still in league with Satan and was there to destroy the Church from the inside! I just thought: What is the matter with these people? Christianity is all about forgiveness and acceptance, and here are the future leaders of the Church acting like cliquey teenagers. I walked away from my training and didn’t go back to church for six years. I still believed, but I thought organised religion wasn’t for me.

My partner, Alex, had become ordained, and I was visiting her one weekend. She said: “We’ve got nobody to do Morning Prayer for one of our churches. Would you do it?” I said: “You’re out of your mind.” But she kept going on about it. Eventually I said: “Fine, but you owe me big time.”

I borrowed a cassock, and within the first three lines of the stuff that I was reading, my brain just went: This is what you should be doing. I don’t know whether that was God or me, but everything slotted into place. I went back and told Alex and she said: “See, I told you, that’s what you needed.”

I started going back to church again. And then went back into the selection process, but this time with the Church in Wales. And the rest is history.