The number of children being educated at home has risen by 75% this academic year, with "Covid anxiety" being listed among the reasons. Megan Wilkie, who recently took her daughter out of school, tells us about the highs and lows of being a Christian home educator 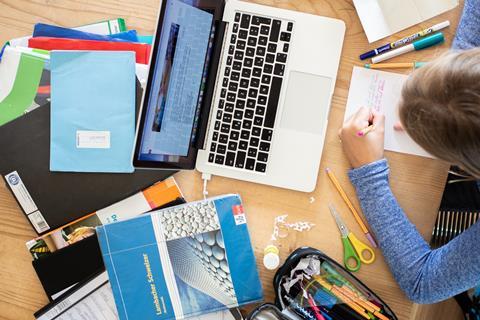 I'm a single mother and my little girl, Madison, 9, is the greatest joy of my life. My family in America homeschool their children and it’s always been something that I’ve wanted to do. Then we had this opportunity during the lockdown when the schools were closed, and I thought: Lord, this is such a great opportunity. Let’s see how things go.

It was amazing and we had so much fun. But then she went back to school and she floundered again. Her teacher from the previous year, who’s also a Christian, said, “You know, I could see a huge change in her when she came back, and then she lost her confidence again.”

I prayed about it and I thought: The Lord is telling me to homeschool her, but I don’t know how to do it. Then out of the blue I was offered an online, part-time tutoring job. Because it was working from home, it meant I’d be able to homeschool.

My daughter was really unhappy, and I was still praying about whether to do it. Then I had this vision of a cartoon warrior - these ladies dressed in leather, with crisscross swords on their backs. The Lord was saying: “You need to equip your daughter to be a warrior for me, because she’s going to go into battle for me when she’s older.” It was the clearest vision I’ve ever had. I said: ‘That’s it, we’re going home school.’ And I pulled her out of school.

I said to the headteacher: “I’m really sorry, it’s a lovely school and you guys have been amazing, but it is important that my daughter learns about the Lord and is raised in a godly way. And if she’s spending six to eight hours a day in a place where it’s not a godly environment, she’s not going to learn that."

The head teacher wasn’t surprised. He said: “You know, you’re not the first family.” In 20 years, he’d never had anybody leave and then, suddenly, a number of families left within months.

We joined a Christian homeschooling facebook group, and it’s been phenomenal. We’ve been so blessed by the Lord, because we’ve met some amazing families and now Madison calls some of these older boys her brothers.

On a Monday, she does gymnastics, so it’s been a great opportunity for witnessing to some of the other mums. The majority of home schoolers in our area would be Muslim, so we’ve had the opportunity to witness to them. She has ballet on a Tuesday and then on Saturday, she has horse riding and ballet as well. So she does see a lot of children. She’s not isolated; we still have fun playdates with her old school friends. She’s not stuck at home with some tyrannical mother going, "thou shalt not sin.” She’s got a great social life.

She’s not stuck at home with some tyrannical mother going, "thou shalt not sin.”

When I asked her, she said, “Mummy, I’d say it was the best decision that you’ve ever made.”

She is so happy. She’s just grown in leaps and bounds. I can’t even explain it. She’s a different child.

The best part is that we’ve started doing Bible studies together, but in a real and meaningful way. It’s not a quick five minutes before we run out the door in the morning. We read a chapter and have a chunky discussion about it, research a little bit about the history and look on the map. She’s learned 30 or 40 Bible verses in a few months and she can recite them word for word. She’s genuinely interested and keen to learn.

We have had quite a few struggles, in the sense of loneliness, especially with Covid-19. We were challenged by a home-ed friend to sing a praise song every morning, regardless of how we feel. It was really hard, but by the end of the song, we were so happy. We were dancing around joyfully. Singing praises to the Lord on difficult days has been a real blessing to both of us.

I have also found it difficult to keep up with things like the dishes, the laundry - just life in general. So I’ve had to be kind to myself and say, “What are your priorities?” Number one is ensuring that Madison learns about the Lord.

Some days we do maths by sorting laundry: "What’s the ratio of darks to lights?" "How many are there?" "How can we simplify that?" We have one day of the week where we will do creative lessons. We do the housework, but also add in: “Can you think of adjectives or adverbs?”, “Can you describe these things?”or “Tell me a story about it.”

I have to work still, and although it’s only ten hours a week, to Madison, it feels like forever when Mummy is sitting behind a computer for four hours on a Saturday! It’s not been easy. Financially, it’s been tough - there’s huge sacrifices. We make them because we love our children, we love the precious beings given to us by the Lord. It’s a huge gift and a huge honour. Every day that you make a sacrifice is a day that you honour the Lord and the gift that he’s given you.

Megan WilkieMegan Wilkie is a maths teacher and home educating Mum. She is a member of the Christian Home Education Support Service (CHESS)