Teenagers want to study religion, but hundreds of schools don’t offer RE

One-third of secondary schools do not provide RE for their 14-16-year-olds. The subject has been neglected for too long, and more investment is needed from the government, says RE teacher Ben Wood 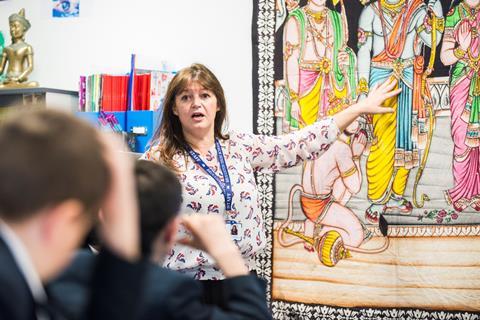 One comment I often hear from parents when discussing their child’s education at parents’ evening is that they wish they could return to school to study Religious Studies.

The mixture of studying religious and non-religious worldviews, as well as thinking deeply about ethical and philosophical questions, seems to be something that many parents value. Increasingly, we are also seeing that young people understand its value too. Entry numbers for A-level Religious Studies have increased by 50 per cent since 2003.

The relevance of understanding the beliefs, ideas and motivations of those around us, the importance of considering thorny ethical issues such as distribution of healthcare, alongside the timeless fascination of thinking through philosophical questions on the nature of existence means that RS holds an obvious fascination for many young people.

However, all is not well with the subject. While A-level entries increased by six percent this year, GCSE entries slipped. Too many schools are not fulfilling their statutory requirement to teach RE to all their students. There are not enough qualified teachers to ensure that what happens in classrooms is of high quality. The subject has long been ignored by government, and while it recognises these ongoing problems, policymakers fear reform, even though options have been presented to them. All of this, ultimately, means that too many young people are not receiving a vital part of their education.

The scale of the problem

Around a third of secondary schools do not provide RE for their 14-16-year-olds, with the problem being worse in academies. In schools where it is provided, too many fail to provide enough time for effective study or do not have the experts required to teach the subject well. In primary schools, RE is too often relegated to an afterthought, with no real planning to incorporate the subject into a broad and balanced curriculum. Primary teachers report a lack of confidence in teaching RE, in part due to the inadequate provision within teacher training; many trainee teachers receive less than three hours instruction on teaching RE during their training year.

The result of this is that there are thousands of young people in primary and secondary schools who are denied the opportunity to learn about and explore some of the most important questions that humans face.

The need for a plan

In 2018, the Commission on RE published A National Plan for RE. Its recommendations included all those things that are required to ensure that our young people get what they need and deserve: Proper funding for teacher training, both for trainee teachers and for those already in the classroom. Space in school timetables to allow for in-depth study. And perhaps most importantly, the establishment of a National Entitlement, which sets out what all pupils up to the end of Year 11, in all publicly funded schools, should be taught.

Christianity remains the religion that is taught more than any other, but for many pupils, the Christianity they learn about doesn’t chime with the reality of the Christian life. Without careful teaching, Christianity can be presented as a simplistic combination of some festivals, attending church and reading the Bible.

At its best, high quality RE helps pupils to understand how beliefs can influence the way someone lives, but also how the way a person lives can influence their beliefs. It tackles challenging questions, recognising, for example, that secularism can criticise religion, but that religion can also criticise secularism. It moves beyond just superficial presentations of religious and non-religious ways of living to grappling with questions of meaning and truth and purpose.

RE has a vital role to play in children’s education as part of a broad and balanced curriculum. It prepares them for life in a diverse, modern society and in an increasingly globalised workplace. The knowledge of how excellent RE can make such an important contribution to the development of young people is what drives the likes of the National Association of Teachers of RE (NATRE) and the Religious Education Council to continue their campaign for high-quality RE for all pupils in all schools. It is what pupils need and deserve.