‘Here I am to worship’: the story behind Tim Hughes’ chart-topping worship song

Inspired by a Stephen King story, the song that Matt Redman famously said was "not that strong” was written by Hughes when he was just 19. Despite a slow start, it went on to win multiple awards and be covered by a host of famous Christian artists 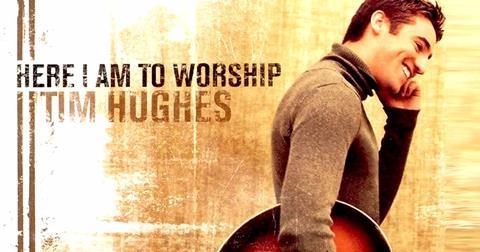 Stephen King is well known for dabbling in the spiritual world, but even he would be surprised to know that he has inspired a leading worship song.

Of course, he is not the main inspiration, but he played a key part in Tim Hughes writing ‘Here I am to worship’, which went on to top the CCLI worship music charts for two years in a row.

Hughes was a 19-year-old history student at Sheffield University when he was struck by the description of Jesus’ humility in Philippians 2. The New Testament chapter incorporates a song about Jesus, recounting how, although he was God, he “made himself nothing by taking the very nature of a servant, being made in human likeness. And being found in appearance as a man, he humbled himself by becoming obedient to death – even death on a cross!”

The singer explained to Premier Christianity magazine: “I began, as often we do, to worship out of response to that.

“I began with these words, ‘Light of the world, you stepped down into darkness, opened my eyes, let me see,’ and also I had that tag, ‘I would never know how much it cost, to see my sin upon the cross.’ But I could never ever finish the chorus, and I got more and more frustrated. When I get to that place, often what I do is park this song and move on.

“About six months later I went to the movies to watch a film called The Green Mile, a Stephen King story about substitution; someone taking on a punishment that wasn’t rightfully his to take. The themes of the cross and sacrifice were so powerful, and I began to sing this song again. I thought, ‘I must finish that,’ but again, I couldn’t get the chorus.”

He did attempt a chorus, but considered it to be “embarrassingly bad.”

Rummaging through old cassettes of song ideas, he came across one that he thought could fit nicely and wrote more lyrics to go with it. “The verses speak about what Jesus has done,” Hughes continued, “and the chorus needed to be a simple, ‘Well, I’m going to respond by worshipping you, bowing down, saying that you’re my God.’ So that’s how this song came together.”

But for a song to take flight, it needs a confident singer and Hughes had his confidence in the piece shaken – by no less than his good friend, Matt Redman.

Hughes told songfacts.com that Redman commented, “Maybe you could use the chorus as a little tag thing. I’m not sure the rest is particularly strong.”

Hughes called that “sabotage” (although he probably meant it tongue-in-cheek!)

The themes of the cross and sacrifice were so powerful, and I began to sing this song again

He told magster.com about the song’s resurrection. “At the time, I didn’t really think much of it as a song and kind of sat on it for about a year. Then, at this conference, I thought I’d just give it a go and it really connected with the crowd. I remember Mike Pilavachi from Soul Survivor coming up to me and saying, ‘You’re going to lead that song every week for many, many years. It will go all over the world.’

“I remember thinking, ‘This guy’s crazy.’ But he was right and what was interesting was just how explosive the song was. So I literally finished university and moved down to Soul Survivor church in Watford to be become their worship leader.”

Connecting with all ages

The song was produced by SonicFlood members Jason Halbert and Dwayne Larring, who pre-recorded the instrumental tracks in America and flew to London to capture Hughes’ vocals. Rather than use a proper studio, they set up microphones and a computer in a children’s classroom in the Soul Survivor church, based in a warehouse. Hughes recalled it feeling “quite surreal, being surrounded by teddy bears, dolls, and Lego.”

But the song, once released, worked at a far more adult level, as he recounted to crosswalk.com: “One time at the end of a Worship Together conference in San Diego… the band stopped, and then the congregation just kept singing the chorus for about 15 minutes.”