’Cornerstone’ is a modern take on an old hymn, written by Reuben Morgan in the midst of a gun shooting. Derek Walker explains more 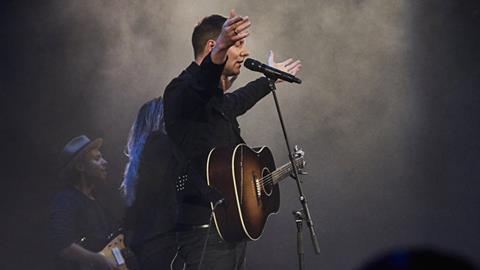 It has been said, in a somewhat tongue-in-cheek manner, that there are no new worship songs. Instead, phrases from many existing ones get written out, cut up, thrown into the air and slightly re-arranged from where they land.

It may be the limitations of the genre that force worship song writers to delve into old hymns and scavenge phrases from the past to introduce some variety and depth. Chris Tomlin did it with ‘When I survey’, Tim Hughes pillaged ‘Happy day’ and One Sonic Society’s ‘Great is thy faithfulness’ stands on the shoulders of giants – specifically Thomas Chisholm and friends.

So the story of Reuben Morgan’s ‘Cornerstone’ starts back in 1834, when Edward Mote wrote ‘My hope is built on nothing less’ (or to give it Mote’s original snappy title, ‘The immutable basis for a sinner’s hope.’)

Mote’s parents ran a pub in London and left the young Edward to play in the street. It was a while before he was exposed to the gospel, but he responded and was baptised at 18. He was working as a cabinet maker in London when he wrote the hymn. Soon after, in 1837, approximately 100 of his hymns were published, including this one.

When things start to fall apart, we wonder whether what we have built our life upon is capable of sustaining us

In his 50s, Mote became the pastor of a Baptist church in Horsham. He was liked enough by his congregation that they offered to give him the chapel building as a gift, which he wisely declined. (He currently resides in the graveyard there, so you could say that the church members got their wish after all!)

Based on the parable of the wise and foolish builders, Mote’s original version of this much-loved song included the lines: “On Christ the solid rock I stand / All other ground is sinking sand” – words taken verbatim by Delirious? for their song ‘Solid rock’.

In 2012, when Reuben Morgan added his own chorus and melody, he left out these lines, but took the entire first two verses as Mote wrote them – hence including the somewhat unintelligible phrase “I dare not trust the sweetest frame.”

Shaken to the core

Piecing together Morgan’s interviews on the subject, plus his own blog on Hillsong Collected it seems the song emerged out of an exceptionally dark time for the nation of Norway. Morgan had travelled there in 2011, arriving the day after the horrific attacks by Anders Breivick, which had claimed the lives of 77 people. It was the deadliest attack in the country since the second world war.

When Morgan arrived, the nation was still reeling: “It had left them at the intersection of fear, doubt and sorrow. Just walking down the street was enough to know that people had been shaken to their very foundations… as the city closed in, I met with some friends. We shared in the sense of shock, felt some of the pain and fear and listened as melody and words began to rise.”

He continues: “We only just have the time to forget the face of the gunman when another chorus of sirens wail. We have barely cleaned up after the flood when an earthquake strikes… When things start to fall apart, we wonder whether what we have built our life upon is capable of sustaining us… With all the storms and struggles that we face, with the threats and fears that stack up, there is only one thing in which we can put our trust.”

Christ alone, Cornerstone / Weak made strong in the Saviour’s love / Through the storm he is Lord, Lord of all

Now there’s an immutable basis for a sinner’s hope.